How to best defend a double leg takedown? Why, sprawl, of course. Just explode into sprawl and all will be good. Well, if you’re facing a mediocre takedown artist, this might just prove to be true. However, if you’re up against a skillful wrestler or a BJJ grappler that knows their takedowns, you’re in for a rude awakening. The BJJ sprawl in itself is not enough to guarantee your safety. It is what you do after it that matters much more than whether or not you did the perfect sprawl. Luckily, Jiu-Jitsu offers not only more options than wrestling in that regard but also much more attractive ones.

Whether you’re on the ground or on your feet, the defense is as important as offense. INn fact, without a good defense, you can’t really hope to attack freely. To that extent, you have to understand the most important aspect of defense is actually what you do after you prevent a move. The BJJ sprawl is not only the perfect example of this concept but also an area in which many need clearer directions.  That is precisely what we’ll attempt to do here today.

Contents hide
The Anatomy Of the Perfect BJJ Sprawl
What Comes Next?
Don’t Just Sprawl!
Conclusion

The Anatomy Of the Perfect BJJ Sprawl

Firstly, let’s discuss how a BJJ sprawl differs from a wrestling sprawl. When it comes to sprawl as a movement, we all know how to do it. After all, it is a fundamental drill of grappling. The idea is that you get your hips flat on the ground so that an opponent can’t move your center of gravity to get you down. Since our centers of gravity are right below our navel, you can see why the focus is on flattening the hips. Moreover, the movement has to explosive in order to ensure you move away from a forward charging opponent. 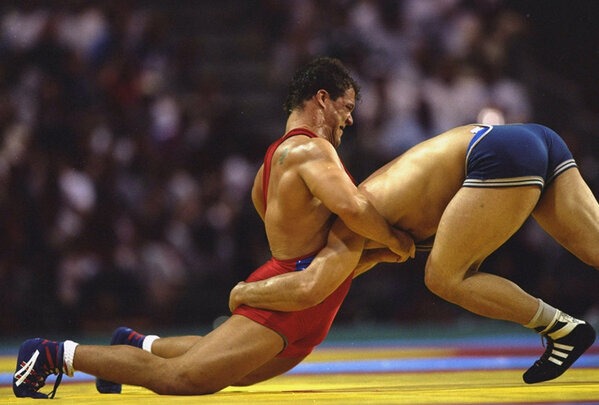 The main reason we look to sprawl is usually to counter a double leg takedown attempt. The more explosive and fast the double leg, the faster and more explosive the sprawl needs to be. As a movement, the sprawl requires very little time which is exactly why it is so effective. With constant drilling and repetition, you can even get faster and more efficient. The reason this is the best movement to deal with a double leg is that it can get the hips and legs away pretty much as fast as the opponent can shoot in.

In terms of weaknesses, though, the sprawl is not a very stable position. As much as you may think you can stay there, you actually can’t. Wrestlers have simple ways of re-adjusting takedown attempts so that you’ll have to sprawl over and over again. The problem is, that unless you manage to break away, you really have no safe spot to go to and after a few shoot-and-sprawl exchanges the takedown is guaranteed to succeed. That’s precisely why you need to really get better at both your BJJ sprawl technique and timing, as well as the available follow-up options.

First up let’s take a look at the wresting sprawl and what wrestlers do when they shoot. First up, wrestlers usually never sprawl like we do when we drill. That means both legs don’t go back at the same time, as this renders you motionless. Instead, they tend to sprawl to one side, leaving their hips much more mobile. However, this also means being able to recognize which side to sprawl on as the shot comes in. With a single leg, this is easy, but it tends to require a lot of practice with double lege takedowns.

Furthermore, when wrestlers sprawl, they tend to look to get out of the sprawl position as soon as their hips touch the mat. It is more of a bounce of the hip on the mats rather than just dropping down.

The other thing you really need to be aware of s what are the options your opponent has. Pure wrestlers are, first and foremost, relentless. They’ll keep pressing you by switching takedown attempts no matter how many you stuff with aa BJJ sprawl. Moreover, in Jiu-Jitsu, the bottom person might switch their attention from a takedown to a back take faster than you can see the threat. There’s also the issue of getting lifted in the air as you come up, which means you completely lose the ability to sprawl again.

The solutions to these predicaments are luckily quite easy. What wrestlers do to perfect their sprawl technique is drill relentlessly. If you want your sprawl to be at the top of your defenses, you need to do the same. Practice with and without partners, do all kinds of sprawls, train them fast and train them slowly. Don’t just train the BJJ sprawl motion, but follow up with your own attacks.

The first thing to consider is transitioning. The fastest way to get out of sprawl is to get to a better position. The moment your hips touch the ground they need to be springing back up. However, you need to do it with clear intent. Make sure you keep your weight behind the opponent’s head so that you have their posture broken. Your goal is to get a better position, which is going for the back. However, in most cases, you’ll have to settle for the turtle. As long as you know transition quickly after sprawling, you’ll force a turtle with ease and be able to launch attacks of your own

Everyone’s favorite submission attacks come next. The easiest way to attack after a sprawl is obviously with a front headlock. From there you can go for guillotines or arm triangle variations like D’arces and Anaconda chokes. Another great option is to go for a Kimura trap, right as you spring up from the sprawl. The Kimura Trap is actually better, given that you do not have to go down on your back like yo do for Guillotine chokes, for example.

Finally, you could try and do what wrestlers try to do – counter with a takedown of your own. After a sprawl, the front headlock can be used to take people down as well as submit them, However, getting to the cradle is your best bet for BJJ. That way you get both a control position and a takedown at the same time.

All of the above are just examples of certain principles. Whatever you do, you’re going to have to choose a follow-up if you want your BJJ sprawl to actually help you stuff a takedown.

As you can see, whenever you’re looking to sprawl as your main defense, you can’t just leave it a threat. The reason why many people get taken down despite executing the perfect BJJ sprawl is that they do not know what o do next. Make sure you factor this in every time you sprawl, and your takedown defense is going to improve massively. Not to mention your improved submission rate and overall counter-attacking game.