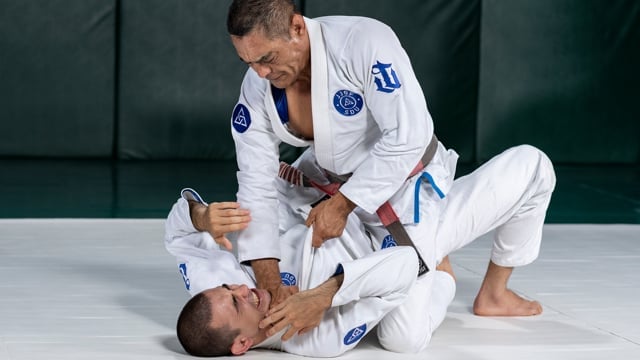 Are you looking for a way that will help you finish takedowns? How about a guard pass that will get rid of the boring closed guard? Perhaps even a submission from the closed guard that people won’t expect? Well, how about if I told you that you can achieve all three, and then some, with just one move – the BJJ punch choke? Using this old-school BJJ move you’ll be able to surprise everyone with one of two things – either a submission finish or wrapping up whatever it is you were initially after (pass, sweep, or takedown).

The BJJ punch choke is a Gi based technique that will help you surprise lots of folks. that said, you can’t bet on it working every time from everywhere – it is simply not a high percentage submission. However, if you are experienced enough as a grappler, you’ll recognize all the options this choke opens up. If you’re not as experienced, just read the article, try it out, add it to your game and see what happens. I can promise you’ll love the results, one way or another.

What Is The BJJ Punch Choke?

The BJJ Punch Choke is a very simple way of getting a tap. There are plenty of variations of it, and the most effective one is actually one done from the mount and one that doesn’t necessarily require a Gi. I’ll mention it briefly because the other version of the BJJ punch choke are actually even more unexpected and unorthodox than this one.

Also known as the ‘grapefruit choke” when you find yourself in the mount, you’ll be looking to place the knuckles of both clenched fists on either side of the opponent’s neck. if you want to be all precise about it, you should aim to have the first two knuckles pressing on the arteries on each side, but that’s not mandatory. Net up, you can do the choke directly, but anchoring yourself by gripping the collars of the Gi, four fingers-in, on both sides will make it all tighter.

The choke works great from the mount because you’re weight is on top, and you can use your hips to further place pressure on both arteries. I’ve used this in competition at different belt levels several times so far, and it works. The question is how t take the punch choke further and make it even more useful, both as submission and as a setup for other moves? the answer is simple and old-school – look to punch just one side, while you manipulate the gi on the other. Read on.

Why Even Consider Such A Move?

Because it is easy to set up, perfectly legal, and will provide you with different opportunities to what you’re used to. The BJJ punch choke will get you plenty of taps, by using the same move when you’re in guard, trying to pass the guard or standing. There are very few moves in BJJ that actually work at all of those three different levels, regardless of how high or low percentage they might be.

With the BJJ punch choke, you’ll get taps or people sleeping against folks that have never experienced them. And yes, that includes black belts. People that know what is going on will provide you with something equally as rewarding as a tap – a reaction. It is of course, down to you to make the most out of that reaction, but wif and when you do, you’ll have a breeze of sweeping, throwing, or passing people of all levels.

Setting Up The BJJ Punch Choke From Everywhere

The version of the BJJ punch choke that you can set up from everywhere works slightly differently than the one from the mount. For it, you want to be holding the collar on one side, four fingers inside, and a pinky finger towards the head. The other arm will grip the collar on the other side, holding like for a basic collar grip.  This second grip may vary depending on where you are setting the BJJ to choke up from, but the first one is the same for all variations.

From a top position, the BJJ punch choke works best against a closed guard. In old-school BJJ they also call it Amassa Pao. What you need to do is get the four fingers-in grip when you’re in someone’s closed guard. You then pop up, pull on the other collar with the other arm, and project all your weight into the choking arm. As long as you maintain a straight arm and forward pressure the bottom person will only be able to open their guar,d but won’t be able to get armbars, Omoplatas, triangles, or anything else.

that said, you’ll rarely finish people from there (only stubborn ones) but you’ll find that the BJ Jpunch choke provides you with the easiest way of opening and passing the closed guard.

From the bottom, it is once again the closed guard that opens up a BJJ punch choke option. The grip configuration is the same, four fingers in on one side, as deep and high up the collar as possible. The other arm just grips a regular collar grip. Usually, opponents are not too wary about the grips, which means you can simply punch in with your cooking arm for the finish. The choke is so sneaky, that people often fall asleep before they even realize they need to tap.

The moment people least expect a choke or submission is when they’re standing and looking to trade takedown. Well, the BJJ punch choke is one of the options that actually work when it comes to tapping out people on their feet. The grip setup is the same as before, you just need to change the angle in order to warp the choke up.

Simply do a step to the side, rotate your body for 45 degrees, and punch in with the choking arm. Easy!

The BJJ punch choke is something that you should consider experimenting with. It will get opponents to react and will surprise even seasoned grapples. Moreover, you can further adjust it to your need,s and let us know if you figure out other positions where this choke might work from.