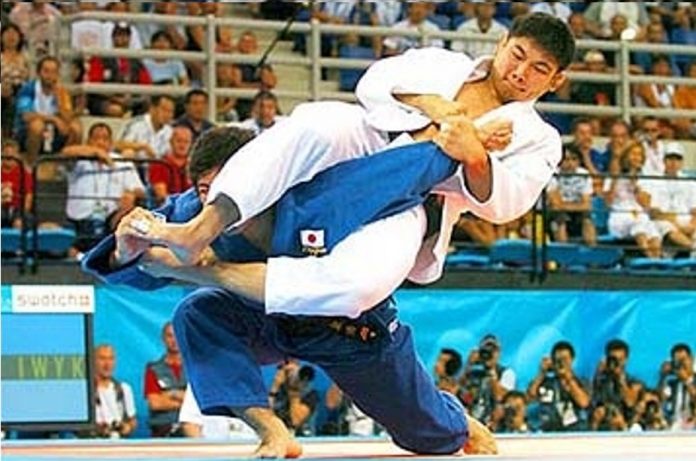 How is your BJJ standing game? Are you a guard puller or do you like to hunt for takedowns and throws? How about submissions? Wait, what? Yeah, taking someone down and/or pulling guard are not your only options from standing. There are virtually no limits to what you can do in Jiu-Jitsu, as long as you follow certain fundamental principles. That means that BJJ standing submissions are not just a possibility but also a very reliable option when standing. Particularly when the opponent has “unbreakable” grips.

Just recently, I decided to switch things up a bit when teaching a class and divert from demonstrating a takedown or guard pull when standing. Instead, I opted for much more unorthodox and less-used options – BJJ standing submissions. It is not like I have a very profound experience with them, so I did extensive research and tested things out in rolling before setting the class up. Suffice e to say, the class was a success and got me thinking more about the standing submissions. IN my experience, some are really reliable and will work for everyone. Others will only probably work for Steven Seagal in a movie. The real trick is figuring out which ones are useful.

As you progression in Jiu-Jitsu, the approach you have changed significantly., There’s a reason why there are a clear belt system and progressions in the art. Every belt brings about a different way of thinking. At a certain point, (somewhere around late purple / early brown belt) the ”why not” approach usually appears for most people. That is when you go from “this will never work” to “why not figure how to make this work”. BJJ standing submissions fit this perfectly. They’re uncommon, require thinking outside the box, but ultimately, why wouldn’t you do them if they are legit?

Getting people to submit is hard enough on the ground. Trying to get standing submissions is a whole different level harder. That said, you can get lots of taps if you get timing and mechanics right. If you ask me, timing is much more important when hunting for submissions from standing. That, and knowing when to let go, and get a takedown ora better position. Timing is extremely hard to teach to someone, so the more you drill BJJ standing submissions the better you will be.

That said, the choice of submissions is also extremely important. Leg locks are pretty much out of the question, for obvious reasons. And, unless you’re into Aikido, forget about all the straight and bent arm locks as well. The things to focus on are easy and quick submissions that are painful and difficult for your opponent to defend. In that regard, wristlocks and chokes are moves you can bet on when trying to submit someone from your feet.

Wristlocks Instead Of Grip Breaks

Grip fighting is a huge and extremely vast part of BJJ. It does not seem so at first, but once you get into it, you’ll see there are lots to learn. A big part of grip fighting, especially with the Gi, is breaking the grips. This can be a really difficult task to accomplish. Some people are just too damn strong and there’s no way to break their grip. Others have a certain way of holding that makes it impossible for you to strip the grips off. Both situations offer a perfect opportunity to go for BJJ standing submissions instead of going for throws and takedowns.

The rule of thumb here is that the stronger your opponent holds a grip, the more efficient your wristlock is going to be. There are many ways to hit standing wristlocks, but my personal favorite is using the collar. Loosen up your own collar by grabbing right below the opponent’s grip. Then, feed the collar around their wrist to your other hand, waiting on top of the opponent’s grip. Get your elbows close and squeeze everything together and you have the arm trapped. Now, the opponent can’t let go of the grip even if they want to.

The wrapped collar ensures not just that the wrist is in pace, but that it is bent as well. The second key portion of any wristlock is controlling the elbow. In this case, a simple triceps grip will do. Once you have it, you pull towards your chest to start exerting pressure. However, the real lock comes on when you bend your body forwards, like for a Japanese bow. You’ll notice the opponent goes toe their knees immediately, aping wildly in the process.

This is just one possible example of a standing wristlock that really works. Feel free to experiment with other options if you’re an experienced wristlocker.

Another category of BJJ standing submissions worth your time is chokes. Okay, we all know the rear-naked choke works form everywhere, but getting behind someone can be hard. Instead, you can opt for different options. The best part here is that you can go for Gi or No-Gi chokes, depending on the situation.

With the Gi, a collar choke is always a good idea. That’s true for when you have a top position, bottom position and even when you’re standing. And yes, the basic cross collar choke does work standing. The key is getting in a very, very deep cross grip and making sure your other arm is free of the opponent’s grips. With standing Gi chokes, it is all about the angle, so you won’t be standing squared up with your opponent. Instead, you want to circle to the side of the cross grip and sneak your other arm under the gripping arm. The choke works from the side and is kind of a hybrid between the cross collar choke and baseball bat choke. To finish, you want to pull on the collars and push your elbow into the side of the neck.

In both Gi and No-Gi, you also have the option of hitting a guillotine or any front headlock choke variation. Jon Jones vs. Lyoto Machida in the UFC immediately springs to mind. For a standing guillotine in BJJ though, you don’t have the cage wall to help you. So, from a basic collar tie, the frit thing to ensure that your palm is cupping the back of their neck. It stays there for the duration of the choke. Of course, you need a snap down to get into position. That means placing your other arm around their neck. What you want to accomplish here is gripping the forearm of the collar tie arm with the palm of your other hand. That’s what makes everything tight and gets you an instant standing tap.

BJJ standing submissions are not moves that will work for you every time. As I said, timing is everything, but there are other variables as well. Mechanics, angles, grips, etc. can all make a huge difference. The best approach to standing submission is not to see them as a one-off option, but rather the start of a chain of techniques.

For example, going for any standing wristlock variation is going to help you break grips with ease. The grip break might happen very early as you’re setting your wristlock up, or late, in an attempt to escape. In both cases, you strip a grip off with ease.

Another option wristlock attacks offer is simple takedowns. Namely, as in our example above, wristlocks tend to get people to their knees very fast. Form there on, even if the wristlock itself does not get you a tap, you can just get top position. That way, you get points for a takedown and a pass, plus the advantage for a submission attempt.
In terms of chokes, what you’ll get is a different type of takedown. Chokes usually have people pulling backward, meaning you can use front headlock/cradle attacks without having to adjust too much. Another great option off of standing chokes is getting to the back, as people try and rotate away to release pressure on the neck. Once you have the back, you can get them down, or do other BJJ standing submissions.

BJJ standing submissions area great way to introduce something different to your game. The fact that you can either take someone down or pull guard off of them makes for a compelling reason to use them as your first means of attack on the feet. Plus, you can do it all the other way around and use takedowns to maks your standing submission attacks. Keep things playful, but keep them painful as well, and you’ll finish matches in seconds.