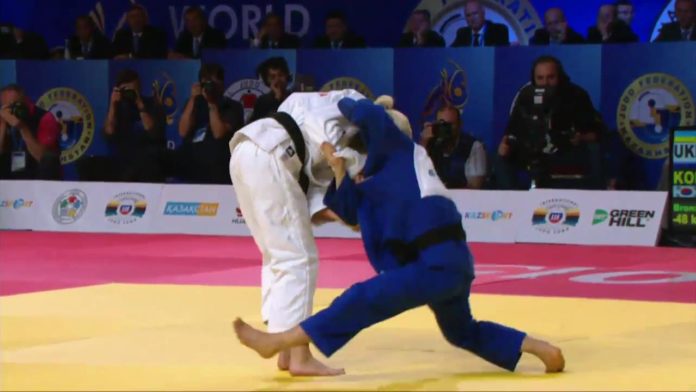 Takedowns are probably the most painful subject to discuss in BJJ. Given that there are entire arts like wrestling and Judo around the action of taking someone down, it comes as no surprise that they’re not easy. Incorporating them into the difficult and complicated world of Jiu-Jitsu makes them even more of a challenge. Plus, there’s the “easy way” of pulling guard to get you pas them. Still, takedowns are an integral part of grappling, and everyone should know at least a few ways of getting people to the ground. IN the Gi, that might just come with the help of the cloth, in the form of a BJJ lapel takedown or two.

The lapels are a funny thing. Whoever it was that first figured out you can use the lapel to bind and manipulate an opponent was pretty much a genius by Jiu-Jitsu standards. Lapels are fun (when you‘re the one doing the wrapping) and do offer a lot of variety to your BJJ game. While not many people think you can pull off lapel stuff from standing, the fact of the matter is you can. It is not just possible, but even preferable. There are some BJJ lapel takedown options out there that have the highest percentage of success of any takedown or throw available.

The Unique Nature Of The Lapel Game In Jiu-Jitsu

If you take a look at grappling martial arts and combat sports that use the Gi, you’ll notice that people do tend to grip the cloth a lot. It is a great way of attaching yourself to an opponent, starting an engagement, and manipulating them into a takedown or throw. However, they usually tend to focus on gripping either at or around the sleeves and along the collar.

Brazilian Jiu-Jitsu, though, utilizes as much of the Gi as it is possible. There are grips the focus on the skirt part of the jacket, creating pocket grips on the pants, and even grips on the belt, while it is still tied around the waist. As such, the most original thing about BJJ has to be the use of the lapels. Unlike other arts, taking the Gi outside the belt and using it to tie an opponent down, or even choke or armlock them is not just allowed, but encouraged. In fact, you could go as far as using your opponent’s lapels, or your own when you’re playing this type of game in Jiu-Jitsu.

In terms of BJJ lapel takedown options, you are pretty much limited to the legs. At least for the time being, until someone figures out a way to wrap the Gi differently. The fact of the matter is that using the lapels to get takedowns is pretty much the same as using them to get anything else you’d ordinarily go for in Jiu-Jitsu. All you need is a bit of creativity, a way to get the lapel loose, and the confidence to pull off high percentage takedowns that nobody is going to expect you to get.

The nasty part about being on the receiving end of a BJJ lapel takedown is that you find it really difficult to move in order to try and resist. Somone controlling your own lapel means they have your posture., given that the lapel goes around your neck anyway, via the collar. Any pull on the lapel tightens the control an opponent has over your posture. Plus, if they decide to warp arms and stuff in it, you’ll end up with blood flow restriction and pain to go with the humiliation.

When it comes to a BJJ lapel takedown, when you use one to wrap the leg, you get the best of both worlds. You get a broken posture, tourniquet-style pressure on the leg, and one of the best grips you could wish for in grappling.

The single-leg takedown is an obvious choice when it comes to using lapels to set up throws. It doesn’t matter how you get to a single-leg position. Everyone has their own preferred way. The important part is that you get one leg in between yours. That is when the battle for the single-leg takedown really happens. It is also a battle that a lapel can help you win easily.

The idea behind the single-leg BJJ lapel takedown is to use the arm that’s nearer the opponent’s front side and loosen a lapel up. You then pull it out and pass it on to the other arm, underneath the leg. Any grip or pull-out troubles you might be encountering with the regular single leg are gone now. This lapel variation gives you all the security you need to hang there for a while before you take people down at will. Or, you could just keep the grip, go for the takedown and follow wherever it may take you, Lucas Lepri style.

The lapel drag (aka collar drag) takedown is another great BJJ lapel takedown you can do set up takedowns. It works from both a cross collar and same side collar grip and will work regardless of depth, with adjustments, of course.

The goal is simple – Make sure the grip is tight, and the collar is somewhat loose. Then lift the elbow of the collar grip arm high, and immediately point it to the ground, pulling with all your power, as you site done on your butt. YOu might finish right then and there, but for a higher percentage finish, focus on grabbing one, to both legs once down, not letting go of the lapel until you’re safely on the ground.

This one is borrowed from Judo, where people call it the Uki-Otoshi. Of course, the version we’ll discuss is a modified one, tailor-made to fit the needs of Jiu-Jitsu takedowns. you’ll need the same side collar grip and a sleeve grip for this one. The goal is to use the sleeve grip to pull the opponent into one direction while turning your body as if doing a hip throw, and dropping to the knees at the same time. The lapel grip will help you pull the opponent over, and they’ll end up cashing face-first most of the time.

This is one you often see Cyborg do against all kinds of elite-level opponents. The grip is on the lapel, preferably a loose one, and is placed quite low compared to where people usually grab. In fact, the goal is to grip on the same side where your opponent has a collar grip. Yoru arm will go over theirs and grip the lapel, as you use the other arm to secure their sleeve in place.

To execute the throw, you step to the side and then do a roll under the opponent’s armpit. This will pull them over you and down with a somersault motion for one of the most attractive and uncomfortable (for the opponent) BJJ lapel takedown options you’ll ever do!

All in all, having a BJJ lapel takedown or two in your arsenal is a smart strategy. You never know when you’ll need them, and what other throwing, sweeping, or takedown options they might open up. The four examples above feature both easy, attractive, and sneaky options when it comes to using lapels and obscure grips to throw people around. Have fun!