The BJJ stiff arm concept is something that most people perceive as highly efficient. While it does work perfectly under certain circumstances, you have to understand that this concept also comes with several highly notable drawbacks. Only when you become aware of them, can you start using stiff arms in the way they were intended to?

The BJJ stiff arm is one of the base concepts behind framing as a defensive strategy in Jiu-Jitsu. However, that is only one dimension of the stiff arm. The concept can also be used offensively, as well as a means of countering. That makes this concept a lot deeper and more complicated than it first appears, and also explains why very often you end up having issues with making anything happen with stiff arms.

Before we discuss the BJJ stiff arm concept, let’s talk frames a little bit. In Jiu-Jitsu, every time we use our arms, legs, or a combination of them to build a structure that reminds us of a picture frame, we are framing. The goal of such a structure is to help us keep the weight of an opponent from falling upon us, while not having to use our muscles to achieve it. There are plenty of different frame configurations depending on the position you’re in and the escape or counter you’re looking for.

In that context, the BJJ stiff arm concept is a variation of framing. In most circumstances, people use that stiff arm to make a long frame, by using a grip on a specific body part as an attachment point, and their skeletal strength as the support behind it. Holding the sleeve of the bottom (over) arm against someone doing an over-under pass on you, with a stiff arm of your own is a great example.

The idea behind the concept is that an opponent can’t push in a certain direction if you’re using the BJJ stiff arm concept. Your arm acts as a rod, with the skeletal structure making it impossible to tire out, or bend. The grip attaches this rigid structure to the body, allowing that side of the “rod” to move along with the opponent. As you can see, it makes a lot of sense, especially in certain situations. But what happens if you try and use it outside of those situations?

When To Use A BJJ Stiff Arm

The BJJ stiff arm concept will do wonders for your if you use it to prevent people from occupying space. Since stiff arms mostly work from the bottom, they actually tend to create space, which is any guard passer’s worst enemy.

The collar guard is a great example. With a cross grip on the collar from the seated guard, you can actually prevent your opponent from coming forwards imply by stiffening your arm and placing your knuckles on their collarbone. However, you’ll need the support of your entire body, so your other arm needs to be in a stiff rm configuration as well, and propped behind you, similarly to a technical stand up. Finally, opening up your shoulder blades will connect the two arms, creating a really sturdy structure that’s next to impossible to break. 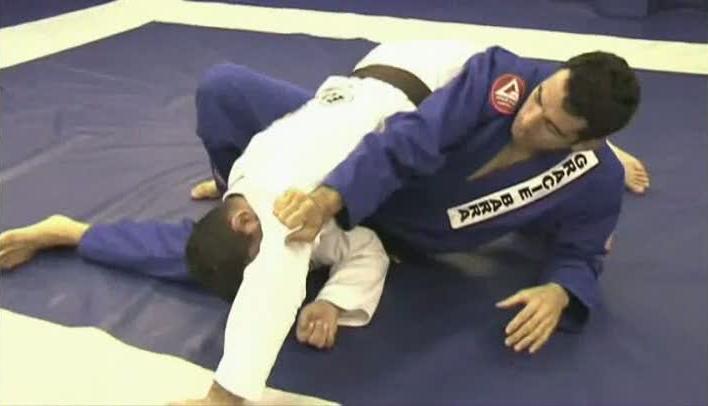 Side control is another situation where stiff arms really do make a difference. If you can set them up early under an armpit, for example, they’ll prevent even an Olympic level Judoka from holding you in Kesa Gatame. This also applies to plenty of other side control scrambles and plenty of attachment points. There are also some instances where the BJJ stiff arm comes in really handy from half guard bottom as well.

When Stiff Arms Will Get You In Trouble

Arguably the most important aspect of the BJJ stiff arm concept is knowing when not to use it, or even better when to abandon it. both of these aspects of the stiff arm are heavily underrated, which often result s in ale less than efficient use of stiff arms.

An obvious example would be the mount, where extending your elbows away from your body translates as trouble. You’ll basically be giving armbars away. The same is true for the closed guard. Gripping someone with a stiff arm will only allow them to control you better without actually having to hold you with grips. 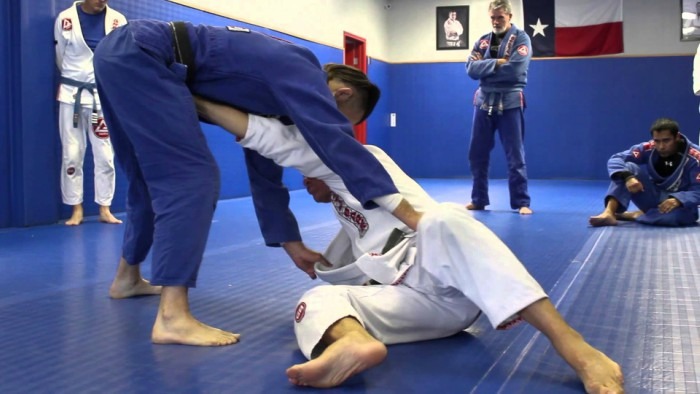 One of the situations that people hardly realize unless others point it out is the relation between frames and levers. If an opponent can sufficiently change the angle of the body part you’re trying to stiff arm away from you, then the mechanical advantage of the farm,e will turn into a mechanical advantage for them, in the form of a lever.

From the top, stiff arms might help you pin people, but you’ll need to be really careful about it. Every time you use a BJJ stiff arm to pin a body part to the ground, it means you’re putting weight behind it. This can easily turn it into a pivot point for an opponent, or a limb that can be attacked with submission (think Kimura or straight armlocks).

The bottom line is, knowing when to bail on the stiff arm and go for something else is what will make it work for you.

The BJJ stiff arm concept is an integral part of Jiu-Jitsu. It can’t be your only way of defending, but it does have an irreplaceable place in the overall game. Know when to use it, who to set it up, and most importantly, when you’re losing the advantage and need to bail. This will ensure your stiff arms work every time you decide to use them, from top or bottom.