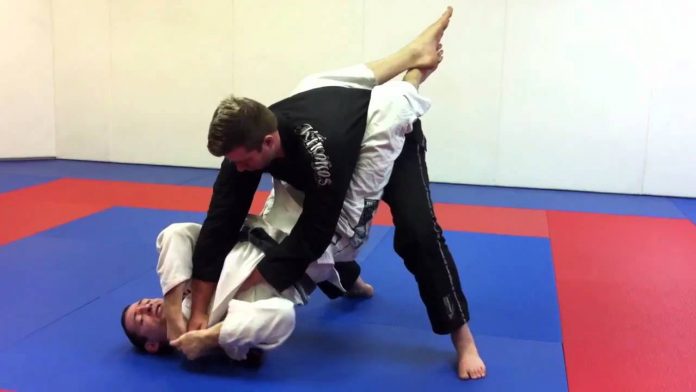 Contents hide
What’s your favorite way of opening the closed guard? Usual options out there include either opening and passing from your knees, or from standing. A less frequently used but effective nonetheless option is passing via Sao Paolo type passes. The Sao Paolo passing system includes going against all principles that you know you should apply when opening the closed guard. In that sense, this is a more advanced version, which is probably why people do not use it so often. Still, there’s a great option of breaking some closed guard opening principles and still getting out of the guard reasonably easy. Actually, you might just get a choke out if not too, or even use it to improve positioning. It is the Amassa Pao, an old-school pressure-style move fro dealing with the closed guard.
What is the Amassa Pao
Regaining Posture
Opening And Passing
The Amassa Pao Choke
Related Articles:

What’s your favorite way of opening the closed guard? Usual options out there include either opening and passing from your knees, or from standing. A less frequently used but effective nonetheless option is passing via Sao Paolo type passes. The Sao Paolo passing system includes going against all principles that you know you should apply when opening the closed guard. In that sense, this is a more advanced version, which is probably why people do not use it so often. Still, there’s a great option of breaking some closed guard opening principles and still getting out of the guard reasonably easy. Actually, you might just get a choke out if not too, or even use it to improve positioning. It is the Amassa Pao, an old-school pressure-style move fro dealing with the closed guard.

The closed guard is a  very tough position to be in. Regardless of what people say, if an opponent likes playing closed guard you’re in trouble. Yes, you might finally end up passing but you might be utterly exhausted by then. it is much easier for the bottom person to control the pace of teh match and even attack. As for the person on top, until you manage to open the guard, there’s not much available. Or, so you thought. There are certain moves that trace back to the Gracies themselves, and which still work effectively to this day. Working with the Amassa Pao to nullify the closed guard is an easy, proven and reliable method. The only drawback is that it requires a Gi to work.

The Amassa Pao works by using the thickness of BJJ Gi collars against an opponent. Namely, you break a major rule of the closed guard, by placing an arm high on the opponent’s torso. This, however, is not going to be an issue if you perform the technique properly. The idea is to thrust the opponent’s collar into their neck, this finishing them or opening the guard. While the risk of an armbar or Omoplaa is present, it is not really concerning once you get this move down. I, personally, came across it completely by accident but immediately added it to my competition gameplan. It hasn’t failed me since!

Luis Heredia is a 6th-degree black belt under Rickson Gracie. It doesn’t get much more old-school than that. In his “Pure Jiu-Jitsu” DVD set, Heredia offers plenty of simple, yet brutally effective techniques. Tthe Amassa Pao is one of them. Learn it from a true master of the art. Check out all other techniques available in this 4 DVD set.

What is the Amassa Pao

The Amassa Pao is often translated as the “thrusting choke”. The basic mechanics involve your whole body’s weight plus gravity focused on one point of the opponent – their neck. The move is as efficient as it is simple. However, no many people opt to go for this technique, which actually adds to its merit. You can surprise even higher ranked belts with it once you master it.

For an Amassa Pao, you need be in the closed guard of an opponent. From there, you’ll look to place both your hands on the opponent’s collars. The grip to use is with four fingers in and the thumb on the outside. The goal is to thrust the Gi collar into the neck of the opponent’ making them wince in pain and tap or give the pass away. Since this isn’t as easy as it sounds, you need to achieve a proper mechanical advantage.

Once there, you’ll also need to make sure you have the correct angle. On the side of your choking arm, you need to get your knee really tight to the opponent’s hips. Not only that but you also need to collapse it towards them, ending up standing at a slight angle in relation to the opponent.

One very important aspect of the Amassa Pao is to use it in order to regain posture. It is one thing to be stuck in closed guard trying to pass. You’ll need to go through some really aggressive grip fighting, but you have the chance to establish your structure and game. If the opponent has your posture though, you’re halfway to being well-roasted. Unless you get posture back you’ll tap or end up on the bottom for sure.

In order to avoid closed guard attacks, you need to regain posture as quickly as possible. In that sense, a broken posture places you in perfect position to establish Amassa Pao grips. Most opponents are not going to really pay attention to this. Once you have the grips, choose your side and use the leverage to force yourself back into the posture. The only catch here is what to do when you have posture back. You need to either immediately let go of it, or go right into a passing with the Amassa Pao. If you just stay on your knees in closed guard, arms extended, you’re going to get armbarred.

This is where things get interesting. For me, setting up a pass is where I really like using the Amassa Pao. The trick is getting the grip. If your posture was broken, you already have a route to establish grips. If, however, you need to get them with good posture, you need to be tricky about it. Namely, you can’t leave your opponent time to go for arm locks. Once you get a grip on them, make sure you pop up to your feet as fast as possible.

Your first priority is to make sure your arm is fully extended. Your second priority is to get the knee close to their pelvis and push it inwards. the angle you create here, along with continuous forward pressure on the neck is going to enough to open the guard. Well, in most cases. Once you feel the legs open up, you’ll be free to get into an even better angle and brush the legs away. In most cases, you’ll end up in a knee on belly, with strong pressure on the neck.

If the opponent is really tough, a lot taller or extremely flexible, you’ll need a bit more pressure to open. In this scenario, the opponent is trying to maintain distance by extending their hips as much as possible. The trouble with this is that, while you can place pressure on the neck, you can’t get the angle you need to open. The solution is easy. Try to get as close as possible with your hips and simply go for a hip extension yourself. This is going to pop open even the most stubborn of closed guards. However, you’ll have to sacrifice the collar grip in order to get the maximal extension.

The final piece of the puzzle is getting a tap while in the process of opening the closed guard. For that, you need to make sure you utilize both grips as best as you can. The beginning part of the choke set up is the same as previously. You need to be on the feet, arm extended and get the angle ASAP. Once there, if an opponent still has their legs locked, you can look to pressure them into submission.

The goal is to place the knuckles of the fist you have gripping their near side collar to the ground on the opposite side. In order to really sink it in, make sure you twist your knee even further into their hip, improving the angle even more. USe the other arm to pull on the opposite side collar, taking away any slack. This is where you’ll get most your Amassa Pao taps.

However, in the case of fidgeting and stubborn opponent’s you’ll need to adjust a little bit. Remember that you begin the move by establishing TWO grips on their collar? Well, the second one not only helps tighten everything up but also offers you more cooking options. Whenever an opponent is thrashing around resisting the choke, simply lift the collar on their other side and switch your arms. Make sure you also adjust your angle to the other side as well. Otherwise, you’ll put yourself into an Omoplata.