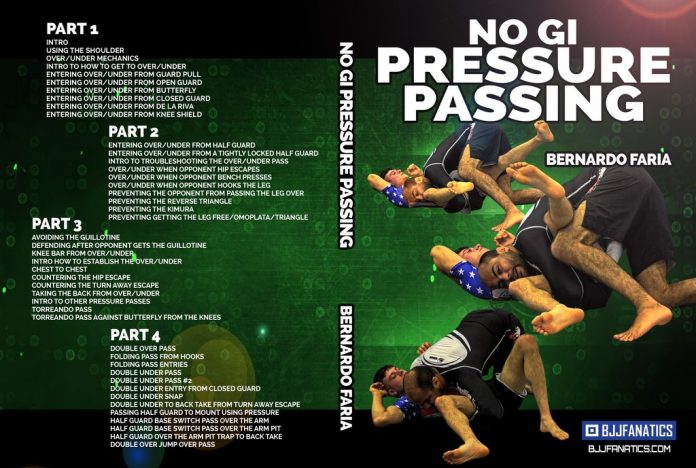 Passing the guard is a very demanding task in BJJ. As simple as it may seem, getting past someone’s legs is not an easy thing to accomplish. And this is with all the anchors and grips that Gi Jiu-Jitsu offers. In No-GI, the difficulty increases tenfold. Without a Gi, eve with spats and rashguards, grappling becomes a lot more slippery. On top of that, the opportunities for control are also greatly reduced. This shortens the list of successful passing techniques that you can use in No-Gi. That said, some passing concepts, like pressure passing, are more than enough to do the trick. Especially when the undisputed expert in the field, Bernardo Faria is explaining them. Finally, after all, his Gi BJJ instructional, Faria released a No-Gi Pressure Passing DVD.

In general, passing the guard, Gi or No-GI can be done in one of four general directions. One is going through the legs, like passing with a knee cut pass. Another is going under the legs, like the double and single underhook pass. The third option requires you to go around the legs, with theTorreando and leg drag being the most notable representatives. Finally, you can take the acrobatic route and go over the legs, via a cartwheel passes or flips. All of them have their merit, but not all are applicable across the board. As the name suggests, Bernardo’s latest No-Gi Pressure Passing DVD focuses on pressure passing, which usually includes a combination of passes through and under the legs.

It is no secret that the over-under pass is Bernardo’s personal favorite. What you can expect from the No-Gi Pressure Passing DVD is a lot of focus on this pass and all possible variation. However, rest assured that Faria offers much more than just one passing sequence.

If there’s one thing you should know about Bernardo Faria, it is that he is as well rounded as grapplers come. The 31-year-old is a 5 times World champ0ion with a very recognizable BJJ style. Despite his overall deep knowledge of Jiu-Jitsu, Faria has a few positions that he prefers above all others. Form the bottom, his signature position is the deep half guard. Its top position counterpart is the pressure passing staple, the over/under pass.

Why should you consider getting the No-Gi Pressure Passing DVD? Well, if you do not already own the pressure passing encyclopedia DVD by Faria, let me paint you a picture. In Bernardo Faria, you have what’s arguably the world’s absolute best passer. Why do I single him out? Because for Faria’s passes, weight divisions or opponent’s experiences make absolutely no difference. Fighting out of the Heavyweight / Super-Heavyweight divisions, Faria has passed the guard of every opponent that has stood against him. These include big names like Gabriel Barges, Leandro Lo, Raphael Lovato, Erberth Santos, and many others.

Faria’s passing skills are undoubtedly world-class, but the true value of his system lies in its principles. Faria knows everything there is about the over/under pass, and is a great teacher on top of it. When you listen to Bernardo deconstruct his methods of passing the guard, you’ll never struggle with it ever again. Of course, if you want to truly become unstoppable get both the No-Gi Pressure Passing DVD by Faria and its Gi counterpart, The Pressure Passing Encyclopedia DVD.

Strong production, impeccable presentation, thorough explanation, and top-shelf quality. That is what we’ve always got from Bernardo Faria in the pat. You can’t blame us for expecting the same out of the “No-Gi Pressure Passing” DVD. Well, we got all that, and then some. Four DVDs come in this set, organized better than anything we’ve seen before. Even the way the material is presented is layered very carefully and methodically.

Despite the title, there are no actual passes before the final DVD. Which, truth be said, is a positive thing. Faria takes the methodical route, building upon the very foundations of passing the guard without the Gi. From the introduction, through basic mechanics, prevention of counters and even re-counters, to attacks and passes, there’s a very clear path through this DVD instructional. A simple must-have for everyone, even those that never actually roll in No-Gi.

#1 Getting To The Position

If there’s anything you need to pay very close attention to, it is the first few chapters of the very first volume of this DVD. The introduction in itself is so full of crucial information, you’ll rewind it at least a few times before going forward. It is, however, the key if you really want to become at least a portion of the passer Bernardo Faia is.

Right after the introduction is the portion that for me, is the real game changer. This is where Bernardo maks up for the lack of control due to the absence of the Gi. The place of the shoulder and pivoting around it is the most important bit of the mechanics of the over/under pressure pass. These three chapters conclude the introductory portion of the No-Gi Pressure Passing DVD.

Following suit in the first volume, are entries into passing positions. To say the least, this is where things get interesting. Entries are not complicated, but Faria does provide half a dozen options of entering, all from different positions. Entries originate from everywhere, ranging from guard pulls, through open guards, all the way to the half guard. There is no guard powerful enough to prevent Faria’s pressure pass. In today’s leglock heavy BJJ game, a key component is passing the butterfly guard. If there’s one person that can teach you how it is Bernardo.

#2 Preventing Counters From The Bottom

If there’s one thing that is more annoying than not being able to pass a guard, it is getting past the legs only to end up back in the guard. This is a very common mistake most people make, and not just beginners. It is hard for grapplers to master the position that comes in between getting past the legs and establishing a solid controlling position.

The second volume of the No-Gi Pressure Passing DVD is all about troubleshooting. Here, you learn how to deal with the most common (and some uncommon) reactions that your opponents are going to have to your pass attempts. For example, a very often seen reaction is a hip escape just after you pass the legs. This opens up ample space for an opponent to re-guard. Not with Faria’s passing system. Regardless if it is a hip escape, strong man defense like a bench press or even a submission counter, nothing is going to work for your opponents any longer.

Prevention and troubleshooting spill slightly into the third volume, before taking a key turn. here, Bernardo goes into the nuances of setting yourself into the over/under pressure pass. This is akin to guard retention when you’re the one on the bottom. We could even go as far as calling it to pass retention.

Once you enter into the over/under position and manage to prevent any early escapes and counters, you’ll need to solidify the position before passing. While there are some clear and present dangers here, there are also some options for you. Like abandoning the pass completely and hitting a crazy effective kneebar. Apart from that, it is all about staying safe from guillotine attempts and looking to place the pressure.

The pressure is the true game-changer here. Once you manage to elicit pressure upon your opponent, the position really sets in. After all, it is a pressure passing DVD! Pressure opens up plenty of opportunities apart from passing as well like back takes and more leg lock submissions.

Finally, the bread and butter of the No-Gi Pressure Passing DVD – the passes themselves. All of you expecting this to be just an overly elaborate over/under pass instructional are in for a surprise. In the final (and longest) volume of this instructional, Farai goes over no less than 15 passing sequences. These feature examples of passing using the Torreando, double under and double over passes, half guard pressure passes and even jump over passes.

As far as uniqueness goes, Faria manages to introduce pressure passing in all guard passing directions we mentioned at the beginning of this article. Regardless of the direction you choose, you can establish a pressure pass that’ll make your opponents beg for you to pass and release the pressure. As far as No-Gi control goes, you can hardly have anything more stable than Faria’s pressure passing system.

A recommendation for you is to check out the folding passes portion of this part of the instructional. You’ll learn a couple of different ways to utilize folding, as well as discover new ways of making your opponents miserable.