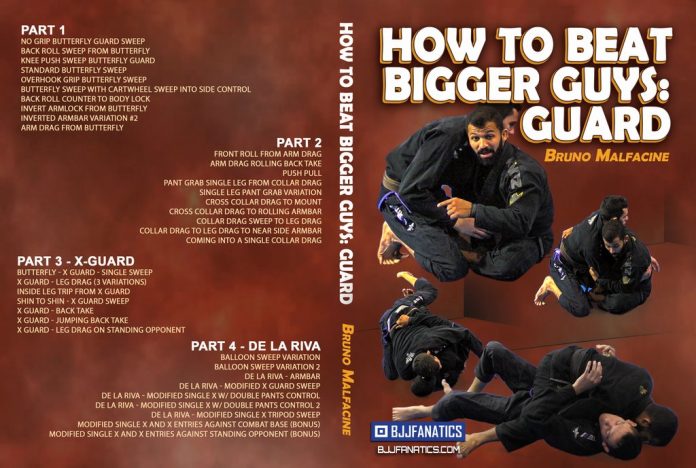 There are world-class BJJ competitors out there, and then, there are legends. Some are already BJJ hall-of-fame mainstays, despite just recently ending their competitive careers. Others, however, are breaking all records and getting through every challenge at an unbelievable rate. They’re writing BJJ history as they go, and they’re not even in their prime yet! One such grappler that’s setting the world of Jiu-Jitsu alight is Bruno Malfacine. As such, the rooster-weight is as formidable as he is small. Explosive, lighting fast and skilled beyond comprehension, people are waiting for a chance to learn from Bruno Malfacine. Well, now you can, courtesy of a brand new  Bruno Malfacine DVD.

ON SALE:
Bruno Malfacine How To Beat Bigger Guys (DVD/DIGITAL)

Anyone in the BJJ community is going to jump at the opportunity to train with a world champion. Most people that are not professional grapplers, white to black belt, rarely receive the chance to train and learn from world-class talents. Bruno Malfacine is one of those grapplers that probably have very little time to dedicate to everyone that would like to train with him. Apart from privates and/or seminars, you’re unlikely to get quality time with such a proficient and active grappler. the best course of action is to grab a video instructional, any video instructional by the best of the best. Like a Bruno Malfacine DVD.

A Bruno Malfacine DVD guarantees top-level instructions without the hassle of scheduling privates/seminars and at a fraction of the price. Malfacine can explain things as good as he can compete, which is a statement in itself. Here, at BJJ-world.com we did a review of the very first Bruno Malfacine DVD so you can have a sneak peek before you get it! 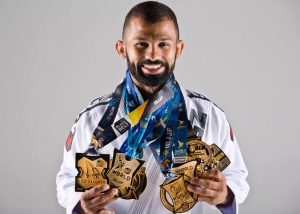 Who exactly is Bruno Malfacine? Most people actually know very little about him, apart from his impressive performances at the highest levels of the sport. Well, there’s a lot more to Bruno than meets the eye. A Bruno Malfacine DVD is now a reality, but the best rooster-weight in the world almost gave up BJJ at one point.

Bruno Malfacine was born in 1986 in Duque de Caxias, Brazil. Malfacine had the good fortune of starting BJJ at the fairly young age of 11. He was a lively child, always scrapping, which earned him his nickname “Bad Boy”. AS he went through the kids’ ranks of Jiu-Jitsu, he hit a stumbling block at the orange belt. He couldn’t train with his childhood instructor so he almost gave up. The enthusiasm of his family got him to Vinicius Amaral, a Carlson Gracie black belt, who turned out to be just what Bruno needed. Under Amaral, Bruno got all his adult belts, including his black belt.

About a decade ago, Bruno got the chance to start training at Alliance. Training under the legendary Fabio Gurgel proved to be the right thing for Bruno’s career. Since then, he has dominated the world of BJJ, particularly in the lighter weight divisions.

As a competitor, Bruno has one of the most impressive records in the sport. He has 63 wins so far, 40 of which are via submissions. Conversely, he has only 9 loses, with just one of those being via a tap. A world champion at purple, brown and black belt, he recently broke a major IBJJF record.

Namely, the 32-year-old just recently conquered his division once again, at the 2018 IBJJF Worlds. Nothing out of the ordinary, if you ask Bruno. However, his last victory brought him historic successes. Bruno just set a new milestone as he became the first-ever grappler to win the Worlds 10 times! Not only that, but he did so in a very impressive manner. Malfacine submitted the highly skilled Rodnei Barbosa via submission in the finals. Now looking to transition into MMA (already with a 3-0 professional record) Malfacine leaves the BJJ world with the ultimate parting gift – A Bruno Malfacine DVD.

Caio Terra’s main rival managed to lose the world title just twice so far, both times at the hands of Terra. Still, without 2008 and 2013, Malfacine got a staggering 10 world titles, after first breaking the duck in 2007. Another staggering statistic is the fact that he closed out his division at the 2018 Worlds with a 100% finishing rate. As far as submission masters go, Bruno tops all charts, regardless of weight.

Master Of the Flow

If there’s one recognizable trait of Malfacine’s grappling style, apart from lots of submissions, it is flow. The Brazilian manages to flow like he is rolling light even when he’s battling world-class opponents. His movement makes him extremely hard to pin, and virtually impossible to submit. That’s exactly the guy you’d like to be learning techniques from. Especially if you’re a lighter weight competitor.

Bruno is known for training Jiu-Jitsu three times a day at the Alliance Orlando Academy. Conveniently, he has Fabio Gurgel, and a host of other top grapplers there to provide him a challenge in training. Malfacine is also a huge proponent of drilling, which seems to be a common thread amongst lighter weight competitors. On top of training BJJ, he also works on his strength and conditioning twice a week, mostly via Crossfit training methods. Bruno also likes to do camps where he brings other top-level grapplers or goes to visit them, right before a big competition.

You can see why Bruno has no difficulty in applying his Jiu-Jitsu while he flows. After all, 7+ hours of hard training each day are surely going to sharpen anyone’s technique. A huge thing that he does, is focused on sleep and recovery after such grueling sessions. With such a crazy schedule, we’re lucky that he managed to release this Bruno Malfacine DVD!

Finally, down to the meat and potatoes of the Bruno Malfacine DVD “How To Beat Bigger Guys: Guard”. Who is this release intended for? Speaking of belts, grapplers of all levels will benefit greatly from this Bruno Malfacine DVD. In terms of weight classes, again, the DVD works for everyone but will be particularly useful to smaller grapplers. Bruno is a master of avoiding pressure, even when he’s up against stronger and bigger opponents. This is exactly the focus of his DVD.

Bruno’s favorite guard variation is the butterfly guard. He uses it to perfection, especially in terms of creating space. YOu’ll notice that there’s a whole volume dedicated to this guard variation. Malfacine’s specialty is space and disrupting the balance. He never lets an opponent put weight on him, regardless of size. To that extent, he uses the butterfly guard to create and retain space. His favorite means of off-balancing an opponent is via an arm drags, which he also covers in his instructional. This very simple concept is all it takes to stay safe while switching into your attacking game. And it’s all laid out as a simple blueprint in the Bruno Malfacine DVD.

As we already saw, Bruno is a huge fan of the butterfly guard. He kicks thing s off right away with a very unique sweep that totally changed my game. It is a no grips butterfly sweep which is going to work every time since your opponents won’t be expecting you to sweep without grips. Options for sweeping include sweeps in every direction, leaving no chance for your opponents to resist. The cartwheel sweep is nothing less than a thing of beauty.

The second portion of the first volume of this inaugural Bruno Malfacine DVD switches attention to submission attacks from the butterfly guard. The overhook grip Bruno likes to employ is a nice refreshment from the usual underhook game. Inverted armlocks are obviously Malfacine’s primary attack options, and they work like a charm. The inevitable signature move arm drag is also there, to wrap things up.

Speaking of arm drags, they also get their own slot in the “How To Beat Bigger Guys: Guard” Bruno Malfacine DVD. Bruno doesn’t just end things with the regular warm drag, and he offers innovative ways of attacking, as the front roll arm drag. there’s also a cool twist on the well known back take from the arm drag.

The second volume of the instructional has most of its time dedicated to the collar guard. For all people that enjoy working with Gi based guards out there, this is a must. People like Kron Gracie and Leandro Lo have already had immense success with this guard variation. Now, Bruno gives it a completely new dimension. He excels at the collar drag, using bigger opponents’ weight against them. You’ll learn innovative ways of collar dragging yourself to sweeps, leg drags, the mount as well as a couple of armbar options.

Everyone’s favorite open guard variation, the X-guard is one of those guards that have been immensely exploited throughout the years. Even today, it is a huge part of most people’s games, especially those that are fans of leg locks. Bruno offers a great system to incorporate some X-guard variation that’ll catch most people off guard.

One key transition is getting into the X-Guard from the butterfly guard. Bruno goes over his take on it, by using the X-guard to transition from the butterfly guard to a 100 % effective sweep. There are also key leg drag transitions as well as lighting fastback attacks. One of them actually includes jumping straight onto your opponent’s back from the x-guard. And that’s not even the craziest part – Bruno knows how to leg drag a standing opponent, and you’ll learn it too after watching this Bruno Malfacine DVD.

Finally, Bruno goes over some BJJ classics at the end. He offers a real De La Riva masterclass, yet with a unique twist as usual. The balloon sweep is the starting point, spinning off into stuff like modified x guard sweeps and armbars. One really cool variation is the hybrid De La Riva / Single Leg X guard variation with a double pants grip. Believe me, even higher ranked grapplers won’t know what hit them with this one.

A few bonus techniques wrap this amazing DVD up. here, you’ll discover a few ways to deal with opponents that change levels. While using the De La Riva against standing opponents it more or less regular, people in combat base usually pose a threat to the guard. Not anymore, thanks to the efforts of Bruno Malfacine!

ON SALE:
Bruno Malfacine How To Beat Bigger Guys (DVD/DIGITAL)