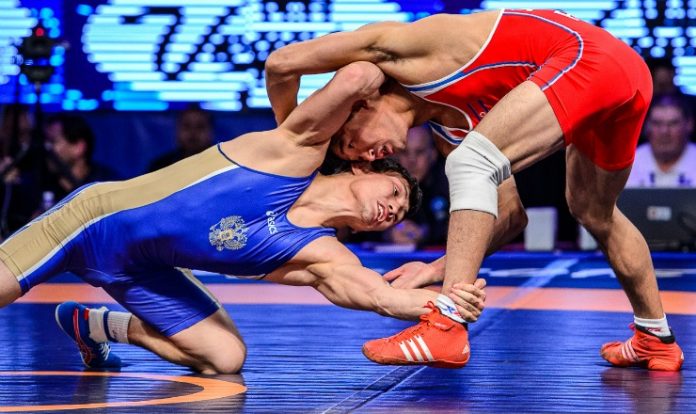 Do you know what BJJ’s best takedown is? The answer might surprise you, as it is actually the guard pull. All other takedowns are borrowed from other arts such as Judo or Wrestling. Accordingly, those takedowns that connect easily to the guard pull are top choices for higher level Jiu-Jitsu players. In case of borrowing from Judo, foot sweeps and/or sacrifice throws can be combined with pulling guard. On the contrary, wrestling offers a different aspect of takedowns to use in connection with the guard pull – the ankle pick.

The ankle pick is one of the most dynamic and effective wrestling takedowns. Actually, it is one of the most versatile takedowns in grappling martial arts. The ankle pick is an offensive move where a grappler grabs the ankle of the opponent and pulls it towards their own body. The idea is to force the opponent into a one-legged stance and take them down effectively. If you know the basics of this technique, you can pick an opponent’s ankle from almost anywhere!

The key to a successful ankle pick is the setup. To begin with, you need to choose which of your opponent’s ankles you are going to pick. Typically, it’s advised to go for the ankle of your opponent’s lead leg. This, in turn, determines which leg you’ll be focusing on. If you are picking his right ankle, your focus will be on his right leg. With this in mind, you can look to get into a position for the ankle pick.

As with all things BJJ, it all starts with the grips. A collar tie or sleeve and collar grips on your opponent are mandatory. This allows for upper body control and the opportunity to push or pull at will. In G, one grip is on the collar, while the other is on the sleeve behind the triceps. In N- Gi it’s head and triceps or wrist control. Knees should be bent and hips low in order to perform a quick level change.

To begin the entry, you need to start pulling your opponent’s head (or collar) down towards the knee of their lead leg. Next, you need to lower your body for a level change. Try to force their head past his knee and towards the ankle you want to pick. The closer the head gets to the ankle, the greater your chances are of taking them down. You’ll also want to try to force a shift in the opponent’s body weight towards the foot of the ankle you’re attacking. This is known as creating a “heavy foot” in wrestling. It is essential in creating much more difficulties for your opponent to defend against the ankle pick.

Taking It To The Ground

To finish the takedown you need to take a penetration step towards your opponent. Make sure you lead with the leg that’s on the same side of your opponent’s body as the ankle you’re picking. From there, look to drop to your knee and cup your opponent’s heel from the outside of the foot.  The outside of their foot should be on the inside of your forearm, given that you’re in the correct position. The arm that grabs the hee3l is the same as your leading leg. It’s the arm that controls the grip on the opponent’s triceps or wrist.

In terms of cupping, aim for the very bottom of the heel so that your pinky finger is touching the mat. This will not only help you control the foot better, but it will also force you to get lower. This is the desired angle for high percentage finishing. Staying on your knee, keep your trail leg extended behind you, basing with your foot.

In one swift motion, look to quickly pull the ankle towards your own body, while keeping a tight grip on the collar/head. Simultaneously with pulling the ankle, push their head/collar away from you. This is going to cause the unbalancing you’re looking for to complete the takedown.

The fundamental setup to the takedown has a lot of details, which, once mastered, will ensure your success. Pay special attention to details about proper grips and body positioning. Another important aspect is correct arm positioning following the takedown. This takedown in BJJ is very effective and it doesn’t put someone at too much risk for things like Guillotine chokes. It’s a smooth technique and doesn’t rely on brute power.

Linking up a fake guard pull to the takedown setup gives both of these highly effective moves a whole new dimension. Primarily, you need to establish your grips and feel like the opponent is not going to pull guard. A push-pull motion with the grips is essential in the correct timing of the takedown.

To start things off, lift your leg as if you’re going to step on your opponent’s hip in order to pull guard. While balancing on one leg, making the opponent hold your weight so that they have to lower their level as they prepare to brace for a guard pull. When you feel the shifting of weight towards their hips, transition into the takedown. To do so, pull the stepping leg back and reach for your opponent’s ankle with the hand that was grabbing their outside sleeve. After the takedown is finished, make sure to keep at least one knee up to ensure that you’re not caught in the closed guard.

Marcelo Garcia has his own variation of the ankle pick. One of the keys to the takedown that stands out is how Marcelo pulls the leg to the side instead of straight up. By pulling to the side, you can sweep your opponent over which would make the takedown easier to finish. Marcelo also talks about keeping control of the head as you go for the takedown. By controlling the head/collar, you are able to control your opponent’s movements. Head/collar control will also help you fold the opponent in half when you go for the takedown.

In a very interesting twist of events, you might find yourself in a great position to get a tight submission off of the ankle pick. Here’s a really interesting transition right into a Toe Hold that you should give a try:

So, now that you have a better idea of how the basic ankle picks works, make sure you drill it often. Once you have mastered it, you’ll be able to pick from a variety of grip position, both Gi, and No-Gi. This takedown is invaluable at higher levels of grappling— it’ll make you tough against any opponent.

7 Takedowns Every BJJ Fighter Should Know