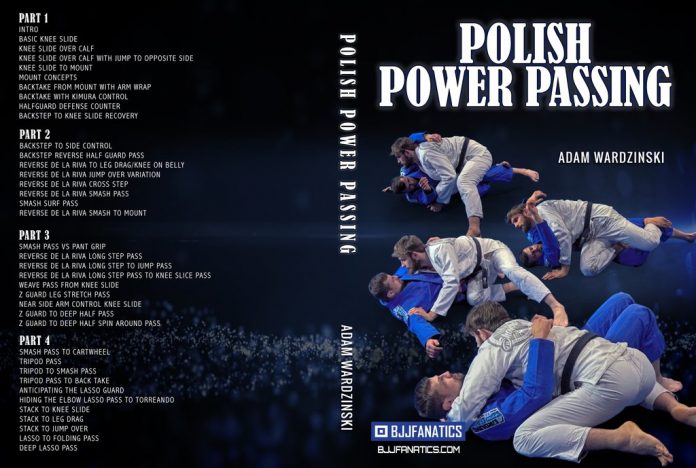 This is going to be the first Adam Wardzinski DVD Review that doesn’t have to do something with the butterfly guard. Well, at least not in its entirety. This new Adam Wardzinski DVD is one from the opposite side of his favorite position. This time, he goes over his passing game, which is just as impressive as his butterfly guard game, to say the least. Similarly to his other exploits (the Gi and No-Gi Butterfly Guard DVDs), Adam’s take on passing is slightly different from others. It is not pressure passing, nor is it distance passing. It is “Polish Power Passing”.

Adam is quickly becoming one of the most revered black belts in the world. The fact of the matter is, he is literally just getting started. At just 28 years of age and only three years of black belt experience, he has a lot more laying ahead of him. So far, he has already established himself as one of the top grapplers in the world. Still, he is far more than just a competitor who specializes in one area. We all know him for his butterfly guard, but Wardizinsk is incredibly well rounded as a grappler. I admit, I also thought he was only a one trick pony until I got the chance to do this Adam Wardzinski DVD Review. Now, I’m hooked on his take on passing, and it’s proving to be extremely effective!

Who exactly is Adam Wardzinski? If you’re following the current cream of the crop grapplers, this is probably something you can answer easily. In the world of Gi Jiu-Jitsu, there’s hardly anyone that can properly challenge Adam at heavyweight. Granted, Aardzinski still has to face some beasts, but so far, he has proven he is up for any challenge. When it comes to No-Gi, his future also seems very bright. He is the first ADCC European trails winner this year, even though it was his very first black belt No-Gi experience. It also lands him in a division that also hosts Josh Hinger, Xhande Ribeiro, Craig Jones, Keenan Cornelius, and Murilo Santana, to name a few.

Adam’s BJJ journey so far has been a really fun one. He discovered Brazilian Jiu-Jitsu at the age of 18 in his native Poland. His first steps in the sport were through Karol Matuszczak, a pioneer of grappling himself in the region. As a brown belt, Adam met Alan Do Nascimento and got affiliated with him. Eventually, Adam got his black belt from “Finfou” in 2016. Right away, Adam began conquering the heavyweight black belt division.

As a competitor, Adam has 150 wins, half of which by submission, and just under 30 losses. Moreover, he has numerous UAJJF, IBJJF ACBJJ, Polish nationals, and other titles. He also has plenty of medals in competitions like the IBJJF European. His earlier accolades are far too many to mention. Currently, Adam is one of the top European grapplers, and about to go even further. His game is growing by the day, and he is no one shy on disclosing what he is working on. The Polish Power Passing Adam Wardzinski DVD review reveals what you can find in his latest high-level instructional.

What exactly does passing like Wardzinki mean? Well, Adam’s style, if his butterfly guard is anything to judge him by is pretty straightforward. Namely, he likes to do simple things and go really deep. He seems to literally know every possible variation of some foundational stuff like the butterfly guard, or the knee slice pass, for example. That said, he then modifies things to suit him and takes things to a whole different level. His techniques are impossible to counter, even when you know they’re coming. The secret to his success is probably right there, in his modification of some of the basics of BJJ. It is also the focus of his “Polish Power Passing” BJJ DVD.

Adam’s fascination with the basics becomes apparent in this instructional as well. From the first moment of the Adam Wardzinski DVD review, the knee slice came into focus. As I went through the DVD, I realized that Adam uses the knee slice to set up an incredibly complex and effective passing system. He virtually leaves no stone unturned and has solution base on the choice of pass you decide to use, rather than the guard your opponent plays. This is a very unique take on passing, given that most people have different passes for different guards.

Keep in mind that Adam is a highly technical and very smart grappler. He uses leverage to gain mechanical advantage and is tactics are based on precision. he does not jump around or do any kind of unnecessary movement. The knee slice-based system he developed works by combining pressure with pinpoint positioning to gain a crucial advantage every time. The most important thing about his system is that it has been tried and tested against some of the best in the world. And it works.

With all of that out of the way, let’s get into the actual Adam Wardzinski DVD review. “Polish Power Passing” is a BJJ DVD instructional that has four volumes. It is impeccably organized and easy to follow. Basically, Adam begins with the ins and outs of the knee slice pass. The entire first volume gravitates around the knee slice and everything associated with it. Then, Wardzinski goes into passing, but the remaining three volumes focus on different guards rather than the passes. He has sections on all key and some of the most annoying guards in Jiu-Jitsu. And he uses the same principles form the first volume to deal with them all.

This kind of progression is new, even to someone like me who has seen countless BJJ DVD instructions. However, the system works perfectly and the production of the DVD is also impeccable. The camera work is particularly precise, offering multiple angels on each passing sequence. All in all, this four-part instructional is a great tool for anyone, regardless level, or favorite way of passing, However, those that liek to use the knee slice will benefit the most out of it for sure! Check out the play-by-play Adam Wardzinski DVD review below.

#1. Intro To The Knee Slice Pass

Kicking off our Adam Wardzinski DVD Review of The Polish Power Passing is the knee slide. Adma goes over a short introduction before moving on to the basics of this fundamental pass. he really spares no detail here, as he dissects and explains the knee slide throughout the entire first volume.

The first half of this first part addresses multiple aspects of the knee slide pass. Wardiznski covers both the mechanics and dynamics of the pass, dumbing it down during the process. he also offers plenty of variations on the basic. His take on knee sliding over the calf is really groundbreaking, even though he only makes slight changes to what we’re used to doing. There are also directional changes and all the ways in which you can integrate them into your game.

The second half of Volume 1 is all about mount concepts. You might wonder how they fare in a guard passing DVD? Well, Adam loves complete sequences as opposed to just techniques. As such, he uses his passing to establish dominant grips and positions for later on. That means that when he passes the guard, eh ahs direct mount attacks or back control transitions. Some knee slide recovery concepts complete this volume.

#2. Slicing Through The De La Riva

In the second portion of the Polish Power Passing DVD, Adam goes into the passes themselves. here, though, he focuses on the different guards you might encounter. Still, there’s no major philosophy here. Instead, he just demonstrates how you can modify the principles and techniques from volume 1 to beat any guard. Simple and powerful!

The guard that gets a lot of attention here is the Reverse De la Riva. This guard is the one that people most commonly use to try and counter the knee slide. As they do, Wardzinski offers a whole host of different passing options, from leg drags to smash passes. And they all start from that original knee slide position. My personal favorite from this volume is the cross step, which is a simple but completely unstoppable way of beating the RDLR.

Completing the volume a are a few backstep options that tie in really well with all the rest. They mostly work against the half guard but combine well with other passes too. Or leg locks, if that’s what you’re after.

To be completely fair, this part does not only cover the Z-Guard. There’s a lot more Reverse De la Riva passing here as well. Namely, Adam has one more RDLR passing sequence he likes to share – the long step. Given that it all starts from the knee slide, this really gives the system a complete look, as it combines perfectly with back steps a well. All in all, the three chapters on long stepping past the RDLR really leave this guard powerless.

As far as the Z-Guard is concerned, this was probably my favorite part when doing the Adam Wardzinski DVD review. Why? It offers some great options, from real basics to advanced sinning passes. The leg stretch pass is by far my go-to, but the spin around the pass and subsequent deep half passes are also worth your attention. There’s also a weave pass sneaked in there that is going to leave plenty of opponents wondering what’s going on.

Honorable mention to the smash pass vs. pants grip, that really solves one of the most annoying puzzles of Gi BJJ.

Finally, some real pressure passing. Or should I say the real Polish Power Passing? Adam saved the best for last, as he focuses on smash and stack passing in this final volume. It all begins with yet another smash pass variation, this time heading into an attractive cartwheel pass. Another thing that really made my day when doing the Adam Wardzinski DVD review was the portion on tripod passing. Tripod passing is not only a great form of pressure passing, but it also provides you with lots of mobility. Options here include passing with pressure or opening up the back.

Another key part in this volume of “Polish Power Passing” is the one chapter o dealing with the lasso guard. Pretty much everyone that does Gi BJJ hates this guard, and Wardzinski seems to have solved it once and for all. He not only shows you how to pass it but also how to anticipate and counter it very early. The folding pass against the lasso is a real masterpiece, that is impossible to defend against.

Wrapping up this incredible guard passing experience area some spine breaking stack passes. And they all start from the knee slide position. Variations include leg drags, jump overs, smash passing, and many more stack variations.

If you like to not only pass the guard but also have direct routes to mount or back control than Polish Power Passing is the DVD instructional for you. As usual, doing an Adam Wardzinski DVD review was a real joy. However, this one was even more interesting, as he went into an area different than his signature butterfly guard. Not many people focus on the knee slide today, and Adam’s take on it is going to bring it right back into contention.