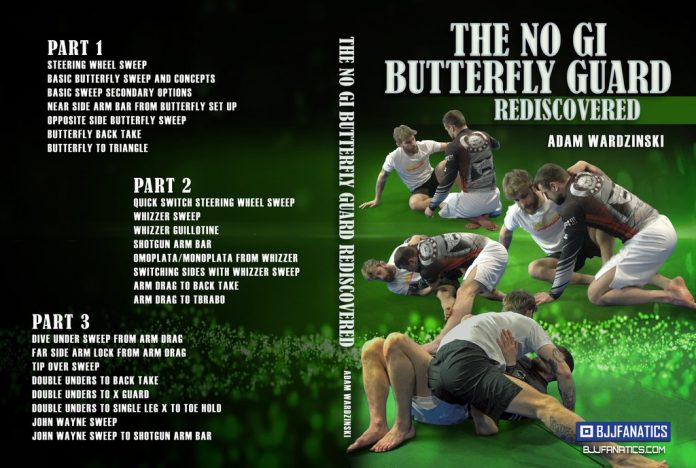 At first, it was Renzo Gracie. Then, it was Marcelo Garcia and Fernando Terere. Today, it is Adam Wardzinski. These are all high-level Brazilian Jiu-Jitsu black belts are famous for playing the butterfly guard. Undoubtedly, the butterfly guard is one of the most effective and versatile positions in Jiu-Jitsu. It seems simple at first glance but it is actually one of the more complex open guards in the sport. There are plenty of instructionals out there covering the ins and outs of the butterfly guard, but none are more complete than the latest addition to that collection. The No-Gi Butterfly Guard Rediscovered instructional is an Adam Wardzinski BJJ DVD that covers this guard from a completely different perspective.

Adam Wardzinski has emerged as one of the most promising black belts of today. the Polish grappler is a real wizard when it comes to playing guard. His immense success with the butterfly guard, in particular, has led to him shooting a much anticipated BJJ instructional on the subject. As awesome as that instructional was, it was a GI BJJ instructional, which is not what most people were after. Luckily, Adams was not done, and now we have the second edition in his Butterfly Guard Rediscovered series – the No-Gi version. It is safe to say that this Adam Wardzinski BJJ DVD is going to have much better reception than his previous one.

There’s no denying that Adam is one of the best in the world when it comes to launching people in the air with the butterfly guard. he is not only a master of the position defensively but can also cause all sorts of trouble, he has sweeps, he has submissions, he has back takes… And, on top of everything, he’s just as good in No-Gi as he is with the Gi. And the best part about it is that he doesn’t even have to work to get there, which makes it notoriously difficult to prevent him from entering the position in the first place.

Just recently, I had the opportunity of speaking to a black belt competitor who went up against Adam in competition. His first Gi Butterfly guard DVD was already out by that time and everyone knew what Adam’s favorite position is. Even after very thorough research, though, the black belt in question still ended up losing against Adam. He said that he knew what Wardzinski is looking for, and even had counters ready, but nothing worked. Adam’s butterfly guard is just that good. Furthermore, he puts his butterfly guard clinic on everyone, Gi or No-Gi.

In fact, Adam also qualified for this fall’s ADCC as well. During the trials, he used the butterfly guard to come on top of a bracket that held over 50 black belt killers. The most impressive part is that this was his first ever No-Gi competition at black belt level! Adam’s crazy butterfly guard system works, and it is taking the BJJ world by storm! Adam trusts his prowess with it so much, that he issued the No-Gi Butterfly guard Rediscovered Adam Wardzinski BJJ DVD during his prime!

One thing that is great about an Adam Wardzinski BJJ DVD is that it works for anyone. White or black belt, male or female, young athlete or old recreational practitioner, everyone will find lots of useful instructions inside. On top of it all, Adam is an even better teacher than he is a competitor, if that is at all possible. There’s a clear line of instructions throughout this Adam Wardzinski BJJ DVD, which is not something most modern black belts can boast with. Moreover, he somehow manages to balance technical advice with conceptual teaching better than anyone I’ve seen.

Adam’s “No-Gi Butterfly Guard Rediscovered” BJJ DVD instructional has three parts, each on a separate DVD. They are all pristine, both content-wise and from a technical standpoint. Sound and camera work is impeccable as is the overall design of the DVD. As far as content goes, each part of the instructional covers a specific subject. For example, overall concepts and some sweeps are the focus of the first volume. The second volume goes up a gear, covering advanced sweeps and submission entries. The final part goes into some Adam Wadzinski specials and brings everything together. All in all, this instructional is simple, to the point and offers nothing but moves that work at the highest possible levels.

Kicking off this brand new Adam Wardzinski BJJ DVD are some key butterfly guard basics. True to his style, Adam starts slow and at the very beginning. He explains everything very slowly and methodically the first thing he covers is a basic sweep – the steering wheel sweep. While many people might think that he should show concepts before a specific technique, there method to his “madness”. The steering wheel sweep perfectly points to the key areas of the butterfly guard. Adam then spends a lot of time talking about them as he covers the complete conceptual layout of his butterfly guard sweeping game.

After a thorough coverage of Adam’s concepts, he goes on to demonstrate the basic butterfly sweep. He also covers secondary options form that basic sweep. these include different sweep directions and key follow-ups. Some of these follow-ups are further sweeping options, while others lead to the back. As an introduction to the second volume, Adam also goes over an armbar and triangle choke entry from the butterfly guard.

In the second portion of the “No-Gi Butterfly Guard Rediscovered” Adam Wardzinski BJJ DVD, the level goes up a notch. Adam’s style is to use a small number of techniques but covers every possible variation. With that in mind, it is clear why the steering wheel sweep is once again the opening chapter. this time, however, it works in a much quicker fashion, since it’s set up in a quick-switch style. This greatly increases the success of this fundamental sweeping technique.

Another thing that Adam likes to use and that is different from most other butterfly guard players is the Whizzer. Similar to Jean Jacques Machado, Adam has a whole system based on the overlook/Whizzer position. It starts with a sweep and goes on to cover guillotine, armbar and Omoplata variations. In fact, there is a great link-up between the Omoplata and aMonoplata, as well as some never-before-seen guillotine choke details. Moreover, there are further attacks with just one simple strategy – switching sides when in Whizzer control.

Completing the second part of this Adam Wadzinski BJJ DVD is a section on arm drags. The arm drag is another huge part of the butterfly guard, and Adam uses it to perfection, An arm drag setup for back control and a Brabo entry complete the volume. However, arm drags continue in the final part of this instructional as well.

The real tressure is in this final part of the No-Gi Butterfly Guard Rediscovered DVD instructional. Her, Adam goes over some of his more advanced concepts and techniques. Similarly to before, he stays on track with the techniques that wrapped the previous volume up. In this case, those are arm drags.

A dive under sweep off of an arm drag opens the DVD, and it is clear how advanced things are going to be in it. The sweep is effective, but it does require a certain level of understanding of the butterfly guard. A far side arm lock ties in perfectly here too, as Adama demonstrates.

As the final volume progresses, Adam changes to a more “traditional” style of control – double underhooks. His take, however, is different, as he leaves no space whatsoever for possible counterattacks. He does, however, use double unders to get to the X-guard, back control or single leg X guard for further attacks. Wrapping up this incredible butterfly guard DVD instructional is a section on the John Wayne sweep.

So far, this might be my favorite Adam Wardzinski BJJ DVD ever! Given that Adam has been a black belt for just under three years, he doesn’t have too many DVDs out. Yet. He does, however, have a more than stellar pedigree when it comes to high-level competition. The “No-Gi Butterfly Guard  Revisited” is just his third BJJ instructional ever. We already saw how great that one is. The other two are his first an second DVD’s, one on the Gi butterfly guard and the second covering guard passing.

We already covered both of these in separate in-depth reviews. The very first Adam Wardzinski BJJ DVD was the “Butterfly Guard Re-discovered“. It is a four-part Gi BJJ instructional that pretty much covers everything there is about the butterfly guard. At least when it comes to the Gi. As such it is the perfect introduction to the brand new No-Gi Butterfly Guard Rediscovered DVD.

Completing the collection is the instructional Adma put together in between the butterfly guard ones. Given Adam’s high level of success in Gi and No-Gi competition, it is clear that he is not just a one trick pony. On the contrary, the young black belt is a very well rounded grappler. The “Polish Power Passing” DVD is a great testament to that. It is a huge four-part DVD instructional that covers smash passing from Adam’s very effective perspective. All in all, this is a three-part collection that’s worth having and one that’s certainly going to grow in the future!

IF you’re looking for the ultimate resource on the butterfly guard, this is the DVD to get. If you ask me, this should be the first one you get anyway, even before the Adam Wardzinski BJJ DVD on the butterfly guard in the Gi. The No-Gi Butterfly Guard Rediscovered instructional has it all, and you can easily build on it with it’s Gi counterpart. Check it out and become as unstoppable as Adam whenever you find yourself in a bottom position.