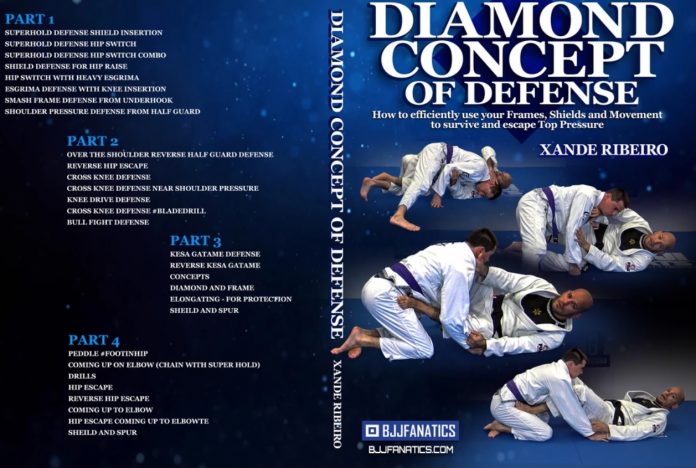 There’s something special about the old-school generation of BJJ grats. Actually, they might feel old school to us, but they’re certainly not behaving like they’re old. People like the Ribeiro brothers, Marcelo Garcia, Megaton and others are still going strong, despite their age. They’re not only avid competitors but restless as teacher s too. Xande Ribeiro, the charismatic younger brother of Saulо Ribeiro is certainly a great example. Just when everyone thought he is getting old, he destroyed legends at the last ADCC getting the bronze. He now offers a different type of DVD, one that covers a unique and highly efficient defense system. ‘The Diamond Concept Of Defense” is a groundbreaking BJJ inсtructional that’ll change the game forever!

It is those black belt tips and trick that are a product of years o training that always make the difference. Whether it is rolling with colored belts, or competing against fresh black belts, experienced grapplers will always have an edge. It doesn’t have lots to do with technique but rather with the overall approach to grappling. As such, Xande Riberio has one of the calmest and yet most aggressive grappling styles in existence. Now, one key aspect of it, the “Diamond Concept Of Defense” finally sees the light of day as he shares his decades of knowledge with the BJJ world.

The University Of Jiu-Jitsu

Alexandre Xande Riberio was born in 1981 in Manaus, Brazil. He began training Jiu-Jitsu fairly early, at the age of 10. However, it became obvious right away that Xande was not just another kid training BJJ. In fact, there’s a stunning statistic for Cande’s early years. During his first 7 years of training BJJ, Xnade Riberio only lost 2 matches in the competition! When we factor in that his entire record is 160 wins and only 40 losses, you can see that this is a different class of grappler that we’re talking about! 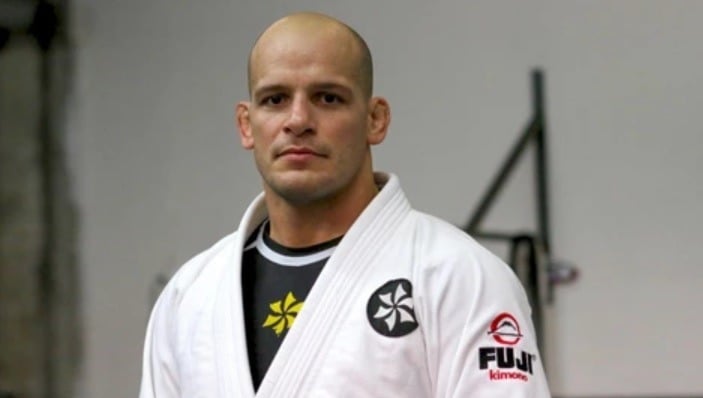 At the very beginning, Xande trained with the Monteiro Brothers before moving to Rio. There, he aligned himself with the legendary Royler Gracie. A the time, he was following into the footsteps of his older brother Saulo, already a well-established competitor. In 2001, Xande Ribeiro got his black belt from Royler and Saulo. Since then, the super heavyweight has won just about everything there is. He has 7 World titles in the Gi, a double No-Gi title, two ADCC titles and 4 Pans championships to name just a few of his major accomplishments! Unfortunately, he withdrew from the 2019 ADCC due to an injury.

That said, the brothers also run their highly successful Ribeiro JIu-Jitsu academy. They are also behind one of the best old-school instructional series so far, The University Of Jiu-Jitsu. This is something

most of us have seen and learned from. Now, however, Cande takes it a whole step further. As much as the University of Jiu-jitsu was basic, his new instructional is downright magical! The Diamond Concept OF Defense is one of those invisible Jiu-JItsu instructionals that’ll teach you unbeatable tactics that are deeply rooted in the bare basics of BJJ.

The “Diamond Concept OF Defense” is a Xande Ribeiro DVD that has four-volume to it. Each volume covers a different aspect of the system, all in a very precise order. Moreover, there are highly innovative concepts in there, that are all guaranteed to work. Why? Because they’re all about the fundamentals, and because it is Xande Riebiere teaching them. That’s why. IN fact, this entire DVD set is one that’ll revolutionize the way you see JIu-Jitsu. And particularly defense. Her,e you’ll learn the ins and outs of positional, defense, transitional defense, and even detailed submission defense. And it all works from a position zero of sorts that his the “Diamond Concept Of Defense”.

The first part of this instructional coves the “Superhold defense” concept which is basically a supercharged guard retention system. Part two goes into some common guard defenses, and ways to easily remain in control. Disc three is where the Diamond concept appears first after the previous two parts set the stage. Finally, in the last volume, Xnade goes deep, offering not only a complete escape system but also ways to train and drill everything he teaches. Of course, we wouldn’t expect anything less from a man of his grappling experience.

When it comes to the Superhold concept, you’re bound to be taken by surprise. I know I was, and I think that I still can’t recover. This is one of those ”facepalm” moments when you think “How come I’ve never thought of this”? Well, Xande not only has but he also has a complete system that he can effectively teach.

The Superhold concept is basically a foolproof way of making sure your hips never get pinned. It works from a knee shield and rests mainly in the hip switch motion we all love to do. Let’s remember that Xande Ribeiro is notorious for his guard passing skills. Conversely, this is also precisely what makes him so great at preventing passes. Thre’s some Esgrima pass defense thrown in there that I think nobody has thought of before. It is all very simple elegant and extremely easy to implement. A real much-welcomed bonus is a chapter on dealing with shoulder pressure.

This is a volume that most people that pick this up will find to be the most useful. Here, Xande Ribeiro covers tactics that help you deal with half guard, and particularly the knee slide passes. Whether an opponent chooses to knee drive across or slice straight through the middle, the “Diamond Concept Of Defense” offers solutions. Moreover, there are options for everything, from the near side to far side passes, both with or without pressure. The best part is that they all work off of the same position and the same basic concept.

A real treat is the blade drill, something that’s essential when it comes to defending the cross knee pass. In the ultimate chapter of this volume. Ribeiro also covers a Torrean pass defense, one which actually doesn’t require you to move at all. Real grappling sorcery!

3 – The Diamond Concept Of Defense

Her’s where things really heat up in this Xande Riberio DVD. Namely, in volume three, the Diamond Concept OF Defense finally takes shape. The reason Xande Ribeiro waited so long, si that this ties in with ball the above concepts, like Superholds and knee cut defenses. It all begins with Kesa Gatame and the reverse Kesa Gatame. The switch between these positions is often really difficult to deal with. Well, the Diamond concept take care of that, once and for all. In fact, according to it, you’\re not just safe from attacks, but also become uncontrollable to your opponent, and all the while you’re only making minor adjustments!

Out of all the volumes in this DVD, this one is the most concept originated one. This is also the one you really need to focus on and understand completely. There’s lots of talk here about frames and diamonds, as well as other principles. A great example is a concept of elongating for protection. Another great one, which I find particularly useful is the spur shield.

In the fourth and final volume of the Diamond Concept Of Defense, everything Xande Ribeiro demonstrated so far starts to click together. This is actually the volume where the entire Diamond game comes together. First up are a few more concepts to help you solidify your defensive position even more. Next up, it is time to chain together the Diamond and the Superhold in order to break out of literally any BJJ bad spot.

Also, a really important part of this DVD and the Ribeiro Jiu-Jitsu philosophy, in general, are drills. Here you get to learn real basics like hip escapes and elbow props. However, now they’ll make much more sense since they’re now a part of the larger “Diamond Concept Of Defense”. What’s best is that you can use them to keep getting better at the concept, even if you find yourself without a partner.

Let’s be completely honest, we never expect anything less than a real gem of a DVD when it comes toa a Xande Riberio DVD. Given that he always goes 100 %, whether it is fighting or te4aching, we got just that. And then some! The Diamond Concept Of Defense is revolutionary, easy to implement and insanely effective! It doesn’t matter who is trying to pass you, if you drill it long enough you’ll probably be able to stop Xande himself! Well, okay, not Xande, or Saulo, but certainly everyone else.