Floyd said at one point that he could beat both brothers on the same night, and shortly after that Jake appeared in front of his face trying to arrange their meeting in the ring as well. 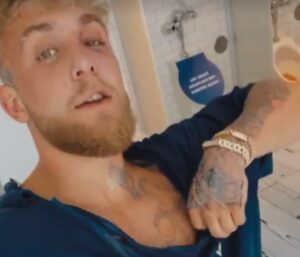 After a few exchanged words, Jake stole Mayweather’s hat, and the boxing legend lost his temper completely the same second. Floyd chased the famous YouTuber in front of dozens of gathered journalists, and according to several portals whose representatives witnessed unpleasant scenes, he allegedly managed to give him a few blows.

The enraged Mayweather was barely dragged away from the younger Paul, and at one point he could even be heard threatening the social media star with the words, “I’ll kill you when I catch you!”.

“I stole his hat because he steals people’s money with his boring fights,” Paul wrote in a tweet.

In one of the posts that surfaced on his Instagram Story, it was also evident that Jake had earned a bruise under his eye. But Paul claims it’s not the result of Mayweather’s punches.

“Honestly, I had three easy fights as a professional so I wished for a little bit of real action. One of Floyd’s 30 security guards hit me in the eye,” Jake explained on Twitter.