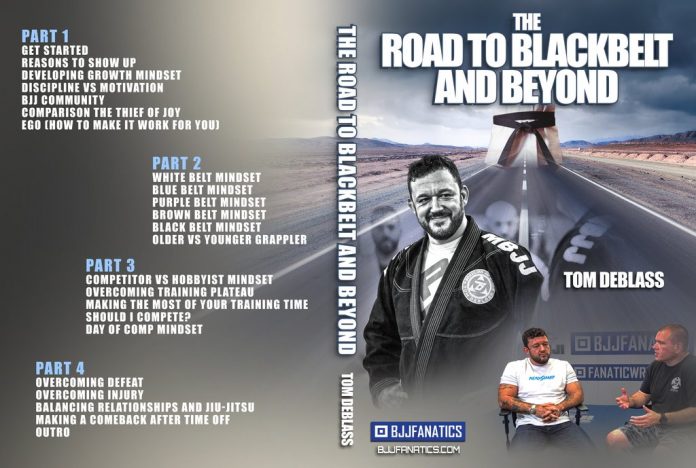 I doubt there’s a person out there that doesn’t like Tom DeBlass. Whether you like his legacy, his MMA career, his BJJ achievements or his amazing teaching style, you’ve just got to be a fan of the guy. So far, he also has one of the biggest DVD collections available today. To be honest I’ve lost the count of how many BJJ DVDs he has out. Today, I have a great pleasure to write a Tom DeBlass DVD Review about his latest, and very unusual instructional: “The Road To Black Belt and Beyond”. Why is it unusual? Read on and discover all the details for yourself!

ON SALE HERE:
Tom DeBlass – The Road to Black Belt and Beyond 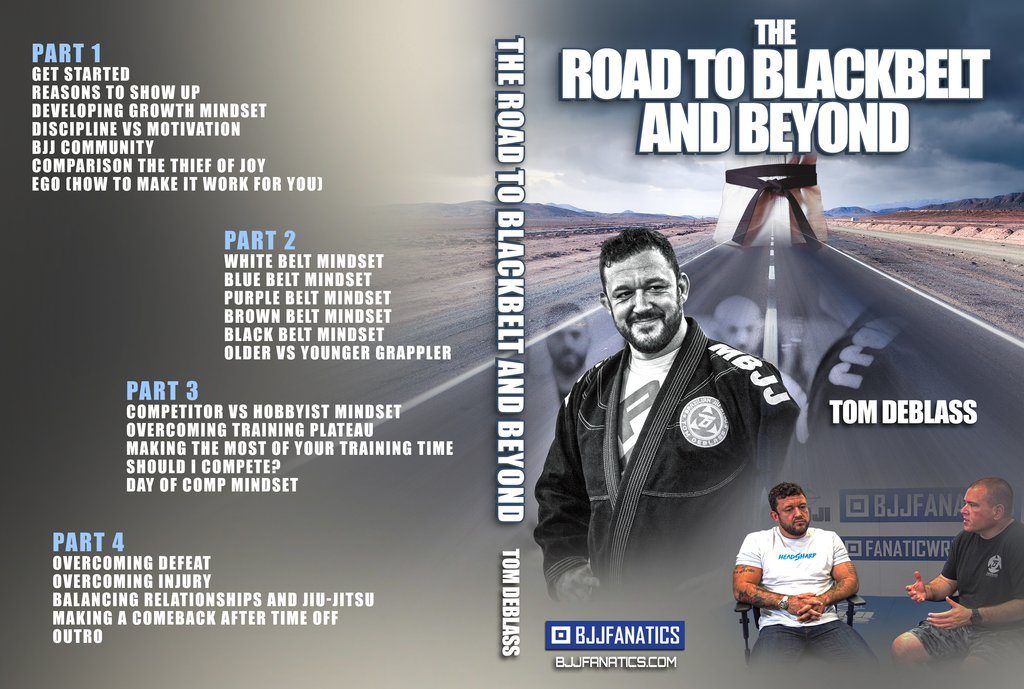 If there’s one thing any grappler without a black belt wants is to get their black belt. The process, as we know, is anything but easy. Some people, I included, enjoy the painfully long process to get there. Others, on the other hand, are looking for a quicker way to get the black belt. And that’s perfectly okay. As long as the belt is legitimately deserved, it doesn’t matter how fast you got it. Well, “The Road to Black Belt And Beyond” Tom DeBlass instructional is something truly different to everything you’ve seen before. I usually avoid titles like this but seeing as it is a DeBlass release and I wanted to do the Tom DeBlass DVD review, I picked it up. As a brown belt, I can tell you this has taught me things I never thought about in all the years of doing BJJ.

One Of The Best In the Business

Tom DeBlas is a black belt under Ricardo Almeida of the Renzo Gracie lineage. He is a world champion that also had a rich MMA career, particularly in the UFC (9-2 pro record). There’s no need to do many introductions to Tom DeBlass if we’re being honest. He is currently heading the very successful Ocean County BJJ academy and is the man behind Gordon Ryan and Gary Tonnon. He is also really active on social media, always encouraging people to really embrace the BJJ lifestyle. But, on top of everything, he is an amazing teacher that has extremely deep knowledge of grappling.

To date, Tom has covered just about every aspect of grappling in his instructionals. He has a bunch of technical DVDs, both in Gi and No-Gi as well as a nutrition and physical training one. Well, as this Tom DeBlass DVD review is about to reveal, this one is something completely different. This is an instructional that is much more than just a DVD. It also includes a complimentary E-book that further covers the subject Tom talks about in the videos. “The Road To Black Belt” is a crazy release that’ll really change the mental approach you have to BJJ. Will it get you your black belt in record time? That’s down to you. What this instructional is going to do is help you progress without a doubt and regardless of your level.

Tom DeBlass DVD Review: The Road To Black Belt and Beyond

So, what exactly is “The Road To Black Belt And Beyond” instructional? It is a four-part DVD instructional that covers the mindset of training and competing in BJJ as well as all the aspects of the BJJ lifestyle. It also includes an E-book that you’ll read in one breath, as it contains some real secrets of the sport inside. Given that Tom has a lifetime of experience in grappling and fighting, all of the advice is pure gold and should be heard by everyone in combat sports.

In short, the first DVD covers some of the general reasons why people join BJJ. However, DeBlass really expands on it, offering a lot more helpful insight. The second DVD is something everyone will love, as it covers the BJJ mindset, belt by belt. Volume three answers literally every answer you might have in regard to whether or not you should compete in BJJ and how to approach it. The final volume covers some of the issues everyone in grappling faces and awesome strategies to overcome them all. Then, there’s the E-book, which contains more information on every subject Tom touches upon in the video portion.

The opening volume of this instructional is all about covering the mental side of Brazilian Jiu-Jitsu. To make thing clear, this DVD set is more of a podcast style one than a technical instructional. Better said, this is a philosophy instructional and it is a first of it’s kind. Tom starts covering how to get started in BJJ and what it actually means in regard to your life. He also covers the reasons to keep showing up which is just as inspirational as it is important to know. He puts things in such a perspective that you’ll scratch your head and ask yourself how come you’ve never thought of things that way.

Furthermore, there’s a key portion in there on developing the growth mindset, something that proves key to your long term success in Brazilian Jiu-Jitsu. Here he touches on subjects like discipline, motivation and the BJJ community and how they all come together to form the BJJ lifestyle. There’s also some information there on the “biggest enemy of grapplers’ – ego, that’s really eye-opening.

This was my favorite part of the instructional when I did this Tom DeBlass DVD review. This portion has six chapters, and each of them covers the Jiu-Jitsu mindset. In each of them, the mindset Tom talks about refers to a certain belt color. He starts off with the white belt mindset and shares some very important information. This is definitely a portion that’ll really help beginners and their integration into BJJ.

Furthermore, he offers some crazy blue and purple belt experiences that are bang on target. It is not that we don’t know about this stuff, it is that we haven’t thought of it in such a way. To that extent, the ‘Road To Black Belt And Beyond” DVD is just as important to people training as it is to instructors. It really helps you understand how people at every belt think, as well as how you should direct them to think and act.

And, all of you brown and black belts out there that think you’re too advanced to learn from such an instructional, think again. Tom covers how you should be thinking as an advanced student of the art, and even as a teacher. Finally, remember I said there were six chapters here? The final one refers to the older grapplers mindset versus the younger ones. And it is nothing short of spectacular!

One of the most common questions in Brazilian Jiu-Jitsu is whether you should compete or just train recreationally. It is a question that even the top competitors of the world have asked themselves. That said, when you decide to compete, just how much is enough? Tom has all the answers in this portion of his “Road To Black Belt And Beyond Instructional”.

Speaking of mindsets, Tom goes over the competitor vs. hobbyist mindset first. This is a very important part of Jiu-Jitsu that no one has bothered to explain so far. Moreover, DeBlass also covers how to overcome a training plateau, which is something literally everyone struggles with. Furthermore, he makes everyday life easier by offering a great way to make the most out of your training time. This was one of the volumes I kept going back to during this Tom DeBlass DVD review.

This final portion really had me listening like never before during the Tom DeBlass DVD review. Even after 8 years of regular BJJ training, I still found extremely important information here. Subjects in this portion include stuff like overcoming defeat and dealing with the inevitable injuries that grapplers surely face during their journey. There’s also some incredible advice on balancing your BJ Life with your relationships. Given that Tom is a happily married father of two that has one of the most successful BJJ gyms in the world, this is precious advice!

Wrapping the DVD portion of the instructional up is a chapter that covers coming back to training after a long lay off. Let’s just say that every blue belt that has quit and who gets their hands on this DVD, will come running back after seeing it. 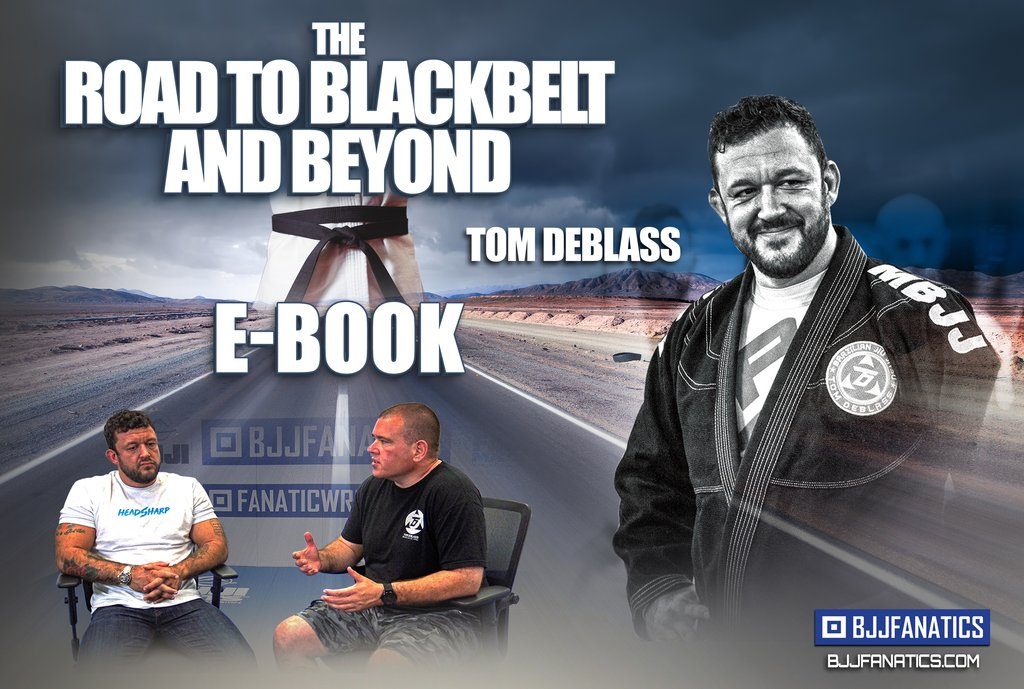 There’s really not much to say on the subject of “The Road To Black Belt And Beyond” E-Book. It just covers every chapter that Tom goes over in the video portion. The sequence of information is the same as in the DVDs. However, the information shared in the E-book is much more extensive than what he talks about in the DVDs. Here, you’ll really get to take a peek into Tom’s mindset and philosophy of BJJ. Let’s just say that this is bound to be one of the top books on the subjects of BJJ that was ever released!

doing a Tom DeBlass DVD review is always fun, but it has never left me speechless before. Let’s just say that I had to go over this time and time again before putting this Tom DeBlass DVD review together. There’s so much invaluable information in “The Road To Black Belt And Beyond” that it’ll completely change your attitude towards BJJ. And believe me, it doesn’t matter how long you’ve been training for or what color of belt you have. Get this DVD + E-book combo and make sure you progress in the Gentle art correctly so that one day, you might come close to where Tom is today.

ON SALE HERE:
Tom DeBlass – The Road to Black Belt and Beyond