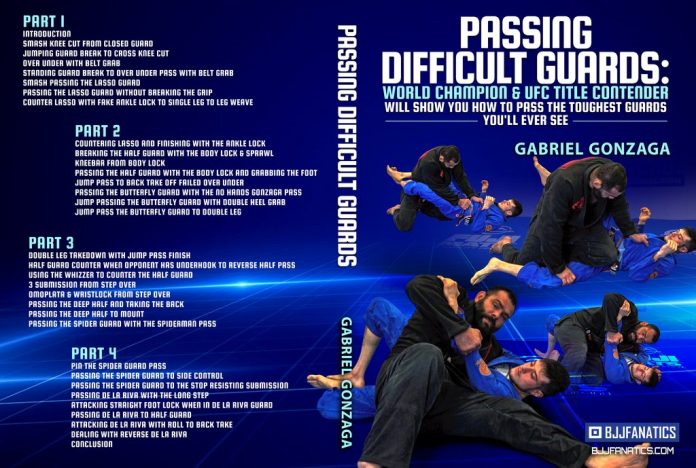 In the past, I was not really keen on looking at MMA fighters’ DVDs. however, today, the quality of instructionals is through the roof, and certain fighters really do deserve our attention. I really try to weed out the ones that are worth watching, particularly when it comes to grappling, though. When you think of BJJ guys in MAM you immediately got Demian Maia, Kron Gracie, Mackenzie Dern, etc. Well, there’s one of the old school that we tend to forget about. That’s Gabriel Gonzaga, A BJJ black belt for more than two decades now. “Passing Difficult Guards” is my very first Gabriel Gonzaga DVD Review and I certainly hope he’ll release many more instructions!

So, learning BJJ from a giant guy can either be unbelievably good or just as horrible. Gabriel Gonzaga is, luckily, one of those guys who knows his stuff. It’s not just about using weight to smash anyone that ends up in bottom position. He has an extremely technical style of grappling. He is also one of the most legitimate black belts among MMA fighters. I’ve never seen a DVD by him previously, but I was enticed to do this particular Gabriel Gonzaga DVD review. I can tell you that I was left surprised, and in a very positive manner. This instructional is dubbed “Passing Difficult Guards” and it provides precisely that!

You might remember Gabriel Gonzaga as the man who knocked out Mirko Cro Cop with his signature left high kick. Well, he is also one of the best grapplers to ever stape in the octagon. In fact, he is one of the rare guys that always trains both in the Gi and No-Gi, even when getting ready for an MMA fight.

Gonzaga was born in Rio De Janeiro in 1979, which makes him one of the oldest MMA fighters currently active at 40 years of age. Apart from being a high-level black belt in BJJ and a UFC heavyweight champion, he was also a professional boxer. He discovered BJ Jat 14, training with Wander Braga. Gonzaga got his black belt in 2000 and is currently a holder of a 4th degree BJJ black belt. He was also never even close to being submitted while fighting MMA. On top of it, he has a BJJ world title to his name as well, at the 2006 Mundials in addition to many other grappling accolades (Copa Podio, ADCC, etc.)

Gonzaga’s style of BJJ is one that’s more specific to lighter guys though. That comes with the two-decade-long experience he has in the art. He is highly technical and does a lot of things differently. This means he has solutions to some of the most pressing issues of BJJ, both current and old.

All in all, Gonzaga has an undefeated pro boxing record, a crazy rich BJJ background and a 17-12 pro-MMA record against the world’s top heavyweights. Now, he also has an extremely high-level BJ DVD instructional named “Passing Difficult Guards”. It is a Gi instructional that contains four volumes, all of which I cover in detail in this Gabriel Gonzaga DVD review.

So, what do you expect from this DVD? To be honest, before going over this instructional for the Gabriel Gonzaga DVD review I thought I was in for one of that generic guard passing DVDs of suspicious quality. Boy, was I wrong! Gonzaga is hands down one of the best guys I’ve seen instructing in a BJJ DVD! Unexpectedly, this turned out to be a Gi DVD which is also not something you usually see with MMA fighters. Then again, he is a 4th degree BJJ black belt.

This DVD instructional has four volumes in total. Each of them is just over an hour long and covers many different guards passes. That said, this is not one of those modern DVDs containing flowcharts and a bunch of principles and philosophies. This is more akin to the old school DVDs filled with techniques that differ from chapter to chapter. However, the reason why this approach works is the subject matter. Gonzaga really does cover passing difficult guards here. In fact, eh offers unstoppable options against all the hardest guards in Brazilian Jiu-jitsu, from the deep half to the spider and De La Riva guards.

There’s a short introduction in which Gonzaga talks about guard passing. his philosophy I simple – there’s no unpassable guard. Right after the introduction, he goes into passing, opening with the closed guard. he begins with a knee cut smash that’s bound to open up anyone’s guard. Still, he adds even more options, my favorite being the jumping guard break.

Going forward, he covers the over under pass, although from a different aspect to the one we’re used to. He likes body locking a lot and has some crazy options that lead from the closed guard directly to the over-under. The lasso guard is next, with the only pass you’ll ever need to deal with it! It is a smash pass that puts immense pressure on your opponent, and in particular, their lasso grip. And, In case of unbreakable grips, there’s also an option for passing the lasso without breaking the grip.

Part two of the “Passing Difficult Guards” DVD picks up right where number 1 left off- passing the lasso guard. Here, though is where this Gabriel Gonzaga DVD review really got my attention. He adds leg looks to his passing making the passes that much more effective! An ankle locks off the lasso pass is the perfect way of making everyone think twice about using it ever again against you!

A body lock solution against the half guard is next, opening up a new chapter in this instructional. From there on, he offers a Bernardo Faria style knee bar, only much more brutal! Trust me this move works! A few more half guard passes follow, along with a back take off an unsuccessful over under pass. Wrapping up is a portion on butterfly guard passing, which contains some much-needed information, given the guard’s popularity nowadays.

In the third portion of this BJJ DVD instructional, things take a turn towards some more advanced guards. These are guards that present universal problems to grapplers of all levels. They involve mostly the deep half guard, before moving on to even more complicated guards. As far a the deep half goes, most of DVD #3 contains crazy effective passing information. From straight forward passing, to wrist locking and Omoplatas along the way, to passing to the back, everything is in here.

The final portion is an introduction into the next volume, covering an easy and brutal spider guard pass called the “Spiderman pass.” Before that, there are also a few additional half guard passes, covering the Whizzer and some submission options.

This Gabriel Gonzaga DVD review was getting better with every passing volume. As expected, the final one was the cherry on top. The very popular De La Riva, RDLR and spider guards are the main subject here. Or, to be more specific, passing them is.

The first portion of this volume goes over spider guard passes. I bet you never thought about pinning the spider guard in order to pass it. Well, Gonzaga has a pin pass that’ll make all your spider guard headaches disappear. A bunch of other passes culminating with a crazy submission one follow suit. As far as the De La Riva goes, there’s a lot more attacking with ankle locks and rolling back takes than complicated multi-stage passes. That is some old school high-level BJJ right there, without unnecessary complications.

Whatever your passing style is, you’ll benefit from the Passing Difficult Guard BJJ instructional. And, one thing I realized during this Gabriel Gonzaga DVD review is that all of the moves work perfectly in No-Gi as well. Well, at least those covering guards that work in both, like the half guard and closed guard. All in all, it is one of the best DVD’s of the year, and you shouldn’t skip it!