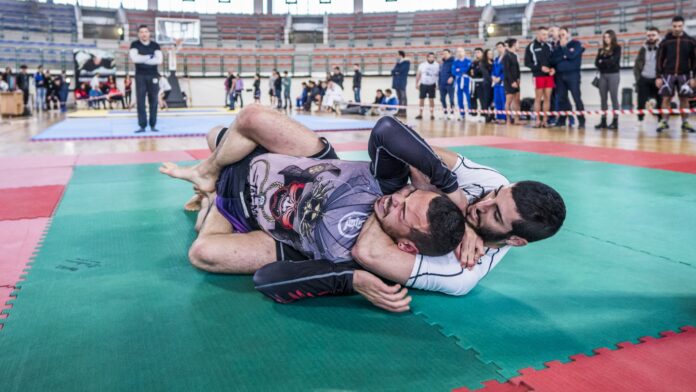 What is your favorite choke? I guess we’ll get plenty of different answers to this question, but the bottom line is that everyone in BJJ does have a go-to choke. yes, even you armbar enthusiasts and leg lock addicts have your own “rainy days” choke. That said, let me ask one more question. Is the choke you’re using a blood choke or an air choke? If you haven’t thought about it, this is the time to give it some attention. While these are not the only types of Jiu Jitsu chokes they are the two most utilized, and the question is, which one is better?

Jiu Jitsu chokes are some of the most fun things to do in rolling. They are the ultimate weapon – there’s no way anyone can withstand a properly placed strangle. There are no thought guys (and girls) when it comes to chokes most people tap out. A few stubborn ones might choose to take nap instead of tapping, but at the end of the day, chokes work. However, we often take chokes for granted and try to go through the motions without really understanding what we are doing. Is it blood or an air choke? What are the mechanics that differentiate the two? Lastly, which is a more efficient choke to go for?

When it comes to attacking the neck, there are four different categories of moves that you can do. That said, not all of them fall within the choke category. Neck cranks are obviously not chokes or strangle, but they are an important piece of the puzzle. Chest compression is another thing that you can do whenever you’re attacking the neck. Crunching people up so that their chest can’t expand will slowly lead to them running out of air, which by definition, could be categorized as a coke. There is no direct pressure on any of the neck’s structure’s though, so the jury is still out on this one.

Blood and air chokes are the final two pieces of the puzzle. We’ll discuss them in detail later on, but for now, it is enough to know they are direct neck attacks. They look to put pressure on specific structures of the neck, resulting in blocage of oxygen. There are different pathways that make this possible, hence the two very different categories of blood and air chokes.

The truth of the matter is the whenever you’re attacking the neck,. you’re most likely using all four of these different categories of moves. Given that usually, one of them is more prominent than the other,s people often categorize their attacks accordingly. In reality, even the best blood choke has elements of air chokes, chest compressions, and neck cranks. the same goes for each and every one of the categories of neck attacks. This is an important thing to keep in mind whenever you’re setting Jiu Jitsu chokes up. 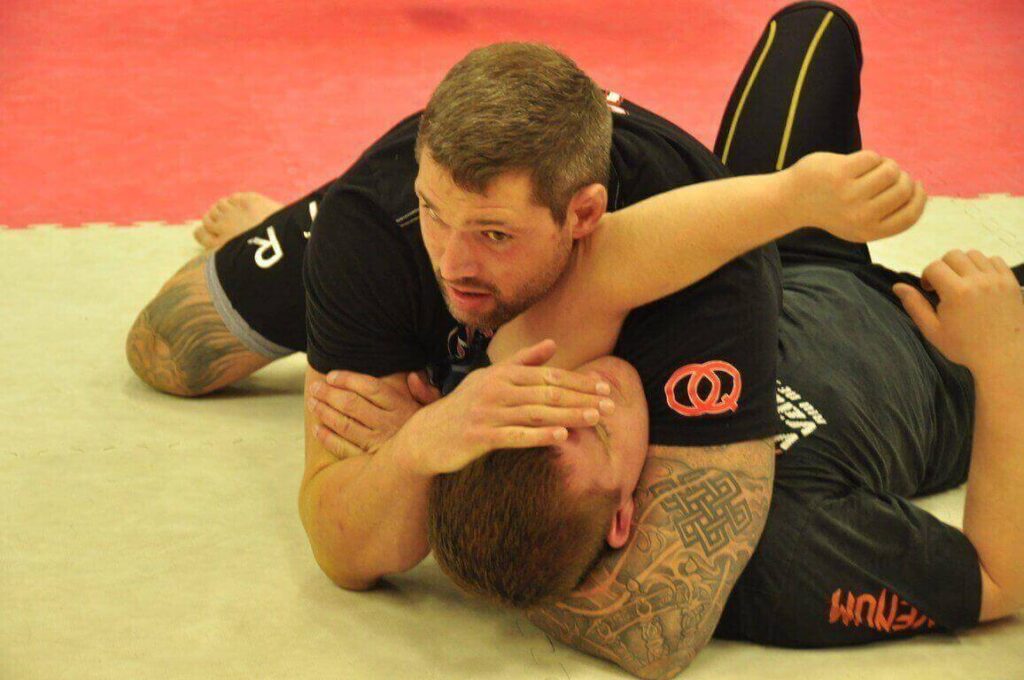 Blood vs. Air Chokes in BJJ

Let’s break down the mechanics of blood and air Jiu Jitsu chokes before moving to confront them and try and pick out a winner.

Blood chokes work by constricting the blood flow to the brain by way of direct pressure on the carotid arteries. There is no way to completely block the arteries off, and there’s also no way to completely block blood flow to the brain, given that the carotids are not the only arteries supplying it. When the level of oxygen in the brain drops beneath a certain level, it will shut down as a safety mechanism. These are also better known as strangles.

Air chokes work in a more direct and somewhat painful way. Basically, you need to block the trachea, as the main pathway of air towards the lungs. The most efficient way is to push on the larynx, causing the trachea entry to close, thus making people choke, literally.

Now that mechanisms are out of the way, let’s look at a few examples of each, as well as some in-between chokes that might just turn out to be the best possible option

Ezekiel Chokes are an example of how air Jiu Jitsu hcokes can work with a very high degree of success. While they can work as blood choke s as well, it is the air choke version that really gets people to panic, whether it is done from the mount, from the back, or even in No-Gi. 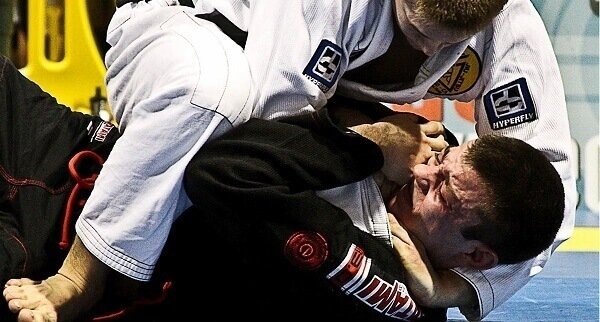 Guillotines are the obvious representative of air chokes. However, it is the arm-in guillotine and variations of the low elbow (like the 10 finger guillotine) that are truly air chokes. The front headlock positioning ensures that all four categories of neck attack elements are present, although forcing the trachea opening closed and pressuring the windpipe itself are the main reasons for people tapping out.

The Short Choke is something you do from back control when you can’t thread the arm deep enough for a Rear Naked Choke or collar chokes. Placing the forearm across the neck will do the trick, and the usual way of finishing is by going for a palm-to-palm grip over the shoulder. Very painful but also very effective – one of Marcelo Garcia’s favorites.

A Gogoplata is probably the lowest-percentage choke you’ll get, but that’s down to the difficulty of setting it up. In the situation of a Gogoplata, you use the top of your foot to constrict the trachea, causing the person on top to choke.

The Bow And Arrow Choke is dubbed the most devastating and effective choke in BJJ. It is done from the back when you use the collars of the opponent’s own Gi against them. It is powerful and it uses the Gi on one side of the neck, and the forearm/wrist on the other to block off the arteries.

Rear naked choke – A gold standard among strangles. It works by applying direct pressure on the arteries on both sides with your arm (biceps on one, forearm on the other). The configuration of the grip creates a wedge which makes it notoriously difficult to get out of – one of the main reasons why it is so effective.

A Cross Collar Choke is one of the classics in BJJ. It works when you cross your hands, four fingers on the inside of the collar on each side of the opponent’s Gi jacket. These are the handles that will allow your wrists to compress the arteries. Works both from the top and bottom positions. 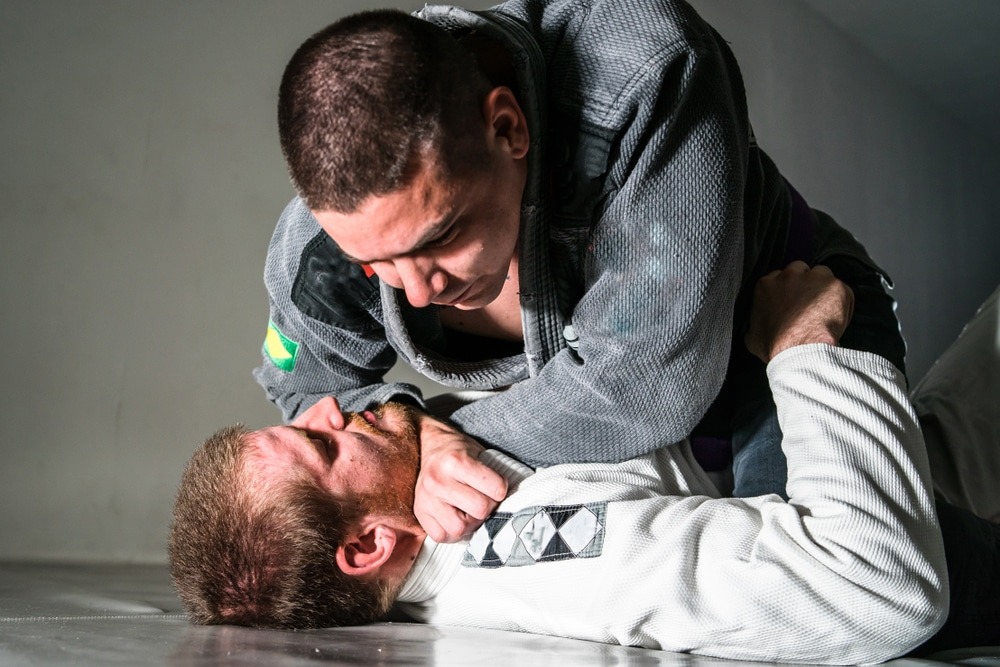 Triangle Chokes are Jiu Jitsu chokes done with the legs or arms and have a common thing in the fact that they utilize the shoulder of the opponent to block off the artery on one side. The other artery is blocked by a leg or an arm, depending on the variation. These strangles can be set up from virtually anywhere.

These are the chokes that you can never really tell if they were a choke or crank, as the common expression goes. However, the truth is that all four neck attack elements are present during these types f attacks which actually makes them really powerful and reliable. The representatives of this category are Darce chokes, Anaconda choke variations, and all the neckties.

Blood chokes are highly reliable in terms of outcome – you get them right and they will render anyone unconscious in 20-30 seconds. That said, getting everything in place can be difficult, especially when going against seasoned opponents that know how to defend. For this type of Jiu Jitsu chokes to work, you need access to both sides of the neck, which can be difficult to obtain.

Air chokes, on the other hand, will take significantly longer to actually render someone unconscious. It will take over a minute for them to start feeling the effects of a lack of oxygen – similar to holding their breath in. However, the paradox is that you get way faster taps with air chokes, due to the pain factor of compressing the windpipe. Also, finishing them only requires access to the front of the neck, which is way easier than getting access to both sides of the neck.

In terms of how quick you get taps and accessibility, air chokes get the nod. However, blood chokes are way more reliable and safer to use in a training environment. Conversely,m they are the better option in a self-defense scenario as well, given how quick they render someone unconscious.

The Dangerous Side Of Jiu Jitsu Chokes

IN terms of blood vs. air Jiu Jitsu chokes, the bottom line is that they both carry dangers when done all the way. That is why we have taps and a gentleman’s agreement of how far we go when training BJJ.

Air cheeks can be really dangerous in terms of the pressure you put on the trachea and larynx. Crushing the trachea can cause severe complications and even lead to a lethal outscome. This has to be something that is clearly stated when learning how to do air chokes.

On the other hand, blood chokes can be harmless for most people even if they go to sleep. The real danger lies in holding on to the choke for too long, which is pretty much hard to fathom in a Jiu Jitsu training or competition environment. However, there’s the hidden danger of putting the vascular system under unneeded stress when putting someone to sleep in cases where people are not aware they have some vascular insufficiencies. that can also be fatal and has to be considered.

The bottom line is that both types of Jiu Jitsu chokes can be dangerous, and potentially lethal. Knowing how long it takes for them to work, why people tap, the correct mechanics, and the gentleman’s way of attacking in BJJ is crucial to being able to practice them in a safe environment.

All in all, I find it hard to choose a winner between blood and air chokes. Both have ap lace in BJJ and I tend to use them both. to be honest, the hybrid chokes like the Darce ara actually my favorites. they provide the option to hunt for air or blood chokes from the same position, meaning you get the best of both worlds. What’s your preferred way of choking people out in BJJ?