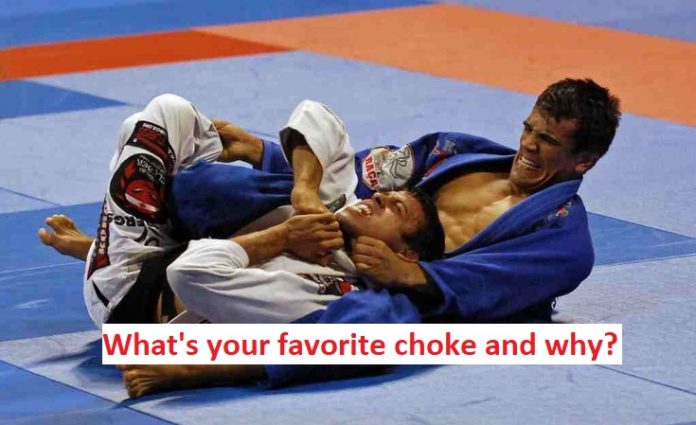 Although chokeholds are not specific to Brazilian Jiu-Jitsu, they have become so much associated with it, that they are considered to be hallmarks of the art. The Rear Naked Choke was perfected by BJJ to such detail, that it bears the name “Lion killer’. Ok, you can’t really kill a lion with it or any wild feline, but it does make a point. BJJ chokes are powerful against any kind of opposition and can be applied to anyone, given the right amount of training.

From another aspect, BJJ chokes are considered to be the ultimate submission holds. Yes, joint locks are painful and might cause injury, but a choke can be lethal. There’s no “I could’ve endured it’ talk with chokes. A properly applied choke leads to two outcomes, none of which leaves any doubt. One is to tap and acknowledge that the opponent got you. The other is to play hard-ass and go through the tunnel and into dreamland. The choice is yours, but do not forget, getting choked out (or tapping to a choke) means that you could’ve died. Such is the power of BJJ’s chokes.

Since BJJ is an art of control above anything else, it is natural that chokeholds are highly technical affairs. When a choke is applied, it is not just about squeezing tight and holding for dear life. Proper positioning is essential, but it is beyond the scope of this particular article. Let’s consider that you’re in the perfect position to apply a choke. What it is that you’re actually looking for?

BJJ chokes go one of two ways to render an opponent unconscious. Most chokes are “blood chokes”, cutting oxygen off by pressuring the blood vessels in the neck. A smaller group of chokes is one of the so-called ‘air chokes”, restricting airflow through the windpipe via direct pressure.

When a blood choke is applied, there’s bilateral pressure on the neck. First in the “line of fire” are the jugular veins. They transport blood from the brain back to the heart. Once they’re compressed, there’s the retention of blood in the head, seen on the face as engorgement. Next, the pressure affects the carotid arteries, vessels that transport blood to the brain. Blood is the only way to transport oxygen to the brain, which is essential for function. Once oxygen is prevented from reaching the brain, consciousness is one of the first sacrifices the body makes in order to try and survive. That is why BJJ chokes result in quick pass-outs.  Although blood chokes do not compress the carotid arteries more than 90 %, it takes only 7-10 seconds to go out. Holding on to the choke for longer than a minute has lethal consequences. 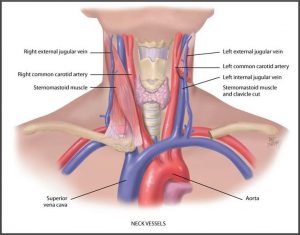 Air chokes are “simpler” and a lot less comfortable than blood chokes.  They put pressure on Adam’s apple, compressing the windpipe. Since they block air instead of blood, it takes longer to choke someone out.

For the sake of clear categorizations, we’re going to divide BJJ chokes according to different systems. These systems are discernable according to body position and points of pressure. Both variables are included because we grouped BJJ chokes into systems that contain more than one move and can be interchanged in a complex game plan based on choking.

Arm triangle chokes are chokes that utilize both a limb from the one applying the choke, and the one being choked. Usually, one side of the neck is under pressure from a part of the arm of the choker. The other side gets pressured by the arm and shoulder of the person on the receiving end.

The arm triangle choke (Kata Gatame) is a great example. It’s done from side control with one arm being placed around the opponent’s neck from the side. the key point is trapping the near side arm of the opponent in the loop in order to obtain bilateral pressure. The choke is tight and very effective.

Lots of chokes from the front headlock position fall into this category as well. The D’arce choke, the Anaconda, and neckties work together in a very effective system that is hard to get out of.

Probably the most recognizable amongst chokes is the Rear Naked Choke. As far as BJJ chokes are concerned, this is the highest percentage choke in training and competitions. A lot of this choke’s success is down to the fact that it is done from the back. Considered the ultimate dominant position, the back is notoriously hard to get out of.

The Rear Naked Choke is applied when one arm is placed around the neck from behind. A key point is placing the chin into the crook of the elbow, so that pressure is distributed equally on both sides. The other arm is placed in a figure 4 configuration ending up behind the opponent’s head. It takes almost no strength to apply huge pressure that takes only seconds to put someone out.

The Rear Naked Chokes system does have a few variations, including an air choke one. When an opponent fights the grips with great success, it’s a good idea to switch to the forearm choke. In this variation, the forearm is placed across the neck, while both palms are firmly clasped over the opponent’s shoulder. Pressure is applied to the windpipe, disrupting airflow.

The leg triangle chokes system is an entertaining one, seeing as the chokes are performed using the legs instead of arms. The classic triangle choke is done from the bottom, by placing one leg through the armpit of an opponent and the other over the opposite shoulder. Pressure stems from the leg over the shoulder on one side, and the trapped arm on the other. The principle is the same as in arm triangles, with the notable difference of using the legs instead of arms.

Lots of variations are available, like the Inverted Triangle, The Reverse Triangle, and even an Arm Triangle Choke.

A system specific to GI Jiu-Jitsu, lapel chokes are highly effective but require the use of a GI. In particular, the lapels of the Gi are used to entangle the neck of an opponent ending up with a blood choke. There are plenty of variations, available from almost every position in BJJ. Some can be done by wrapping one’s own lapel around their neck, while others require the lapel of the person performing the choke. Some, like the Brabo choke, fall under the arm triangle category, where the pressure on one side is replaced by a lapel. The best example of a highly effective lapel choke is the bow and arrow choke.

In regard to air chokes, the Guillotine choke is by far the most effective one. Also, a highly variable choke is applied mostly from the front headlock position. It involves placing the arm around an opponent’s neck from the front, keeping their head in your armpit. Depending on the variation, hands are clamped together on the side of the neck, or trapping one arm. In most instances, pressure is placed on Adam’s apple, resulting in reduced airflow. Apart from being able to put someone out, Guillotine chokes are very uncomfortable and offer a great degree of control.

All BJJ chokes are far from covered in this article. There’s great variety among chokes in Jiu-Jitsu. The North-South Choke, The Buggy Choke, Gogoplata, Paper Cutter choke…the list is endless. However, most of these cheeks can be placed in one of the above systems, whether positionally, anatomically or structurally.

Guillotine Choke – Basics, Secrets, and Variations to make it perfect Submission
Unorthodox Gi Chokes From Every BJJ Position
Catch Wrestling vs BJJ and Which Art Has Better Submissions
Peruvian Necktie – A Tight Choke And A Brutal Neck Crank
The Arm Triangle Choke Encyclopedia For Grapplers
Japanese Necktie – The Tightest Choke in BJJ
LOOP CHOKE – Surprise Your Opponents From Everywhere
Clock Choke Magic To Deal With Turtled Up Opponents