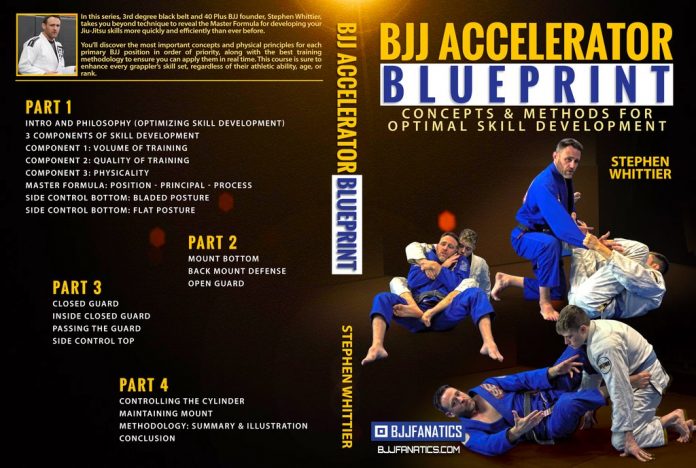 Do you want to learn Brazilian Jiu-JItsu as fast as possible? Well, you’ll need two things in order to do that. First, you’ll have to turn up to every possible class. Secondly, you need the correct guide to understanding what BJJ is all about. If you really want to progress fast, you do not need to learn technique upon technique, You need to understand Jiu-Jitsu and the foundational principles behind it.  The”BJJ Accelerator Blueprint” Stephen Whittier DVD is an instructional that’s aimed particularly at that.

In all honesty, I’m not a big fan of the “learn BJJ in a fraction of the time” type of DVD instructionals. Very often, they tend to be a waste of time, and, not to mention, money. On top of that, I’ve spent almost a decade in the sport, so I’m not really looking for shortcuts. That said, there are some BJJ DVD instructionals out there that can actually help you understand the sport much better. Whether you use them to progress through Jiu-Jitsu, or simply to understand certain concepts, you need to know which work and which are flukes. The Stephen Whittier DVD is one of the few that actually has something to teach people. The fact alone that it’ll help you learn means it’ll help you progress. At which speed, however, is actually all down to you.

The 40 Plus BJJ Formula

Stephen Whittier is a Brazilian Jiu-Jitsu black belt that is one of those instructors that really knows what he’ talking about. After all, he is a Roberto Maia 3rd-degree Brazilian Jiu-Jitsu black belt and a long time professional performance coach. He is one of the smartest people in the game, and one that likes to make others think instead of just copy moves. That is what the “BJJ Accelerator Blueprint” Stephen Whittier DVD is all about.

Stephen is the man behind 40 plus BJJ the help older grapplers work to their maximal potential. However, it is much more than just a system for grapplers above 40. It covers tactics and concepts that help bring the BJ Jgame closer to anyone, regardless of age. While it is tailor-made for older grapplers, it doesn’t mean anyone can benefit from it.

Whittier uses an extremely simple method to solve any grappling situation in BJJ. For that, he likes to rely a lot on basic grappling philosophy and a very clear methodology. The reason his students progress lightning fast through the art isbecau7se they understand how Jiu-Jitsu works, rather than just try to execute as many techniques as possible.

As the owner of Nexus Martial Arts & Fitness in Massachusetts, Stephen is the man behind lots of professional BJJ and MMA fighters, both from a conditioning and tactical perspective. he is also the East Coast regional director for SBG.

The “BJJ Accelerator Blueprint” Instructional is a resource containing concepts and methods for optimal skill development. This Stephen Whittier DVD is a unique product. Given that Stephen is an SBG guy, you can see how keen he would be on a conceptual approach. What Whittier has managed to do, though, is put this approach on a digital format that makes a lot of sense.

The instructional contains four volumes, with Stephen going over different subjects in each of them. The second and third volume addresses specific BJJ positions and situations and are as close to a “regular” BJJ DVD as possible. The first volume is the introductory part, where Stephen discusses skill development and some crucial concepts. In the final volume, he goes over his methodology, illustrating how everything works and how to utilize everything he taught in previous volumes.

In the opening volume of this Stephen Whittier DVD, we get to learn all about Stephen’s take on grappling. As an older grappler, he really likes to rely on brains rather than brawn. this is the most fundamental of all of his concepts. The rest of his system is all about realizing this one most important goal of his.

After a short intro on skill development, Stephen goes straight into the three pillars of his system., these are the concepts that will help you figure Jiu-Jitsu out. The three components of his skill development system are training volume, quality of training and physicality. Following suit is his master formula again involving three steps. Everything is organized in a simple and easy to remember fashion. Pus, Stephen goes over practical examples during his detailed explanations.

Before the volume concludes, there are a couple of sections addressing posture from the bottom side control position.

DVD 2 – The Art of Escaping

If there’s one thing that grapplers over 40, particularly those with a higher rank are good at, it is escaping. Every time you think you have them, they’ll wiggle out of your tightest attack like it was never there. And Whittier is at the top of that bunch.

Unsurprisingly, the “BJJ Accelerator Blueprint” Stephen Whittier DVD has a lot to say about escapes. The way the second volume is organized is in three chapters. The first addresses the bottom of the mount, the second is all about the back mount and the final one is an open guard masterclass. Each of them runs at nearly half an hour, without any interruptions whatsoever. All of the above components and concepts are now seen in action, as Stephen take us through his methodical Houdini game. After this DVD, you’ll never look at these positions as scary anymore.

The third volume of the DVD instructional is dedicated to the closed guard. It covers all aspects of it, from the bottom game to passing. The portion that focuses on how to act when inside the closed guard is arguably the bet on the subject ever. So far we know Stephen’s methods work by applying general concepts to specific positions. In terms of neutralizing and opening the closed guard, there’s hardly a better approach than Whittier’s master formula of position, principal, and process. The same holds true for passing and sweeping from the closed guard.

The final chapter is about controlling the top of side control, bringing things full circle. Once again, some crazy pressure concept and inescapable pins will give you different options from the top side.

The final volume of this instructional is actually the most uniquely original one. The theory (and practice) of controlling the cylinder is something that’s painfully simple, yet nobody thought to put it like that before.

The real value is in the explanations and illustrations of the methodology. Here, Stephen goes over every little detail that makes things click. He then does a summary of everything covered so far. He begins with the concepts and goes through every position from the previous DVDs. The illustrations that help put things into perspective are definitely a unique trait of this instructional.

As modern Jiu-Jitsu keeps developing, the conceptual approach is slowly but surely taking over from the technical approach. However, not every coach knows how to explain concepts and principles the way Stephen does. Having an affiliation with SBG certainly helps, as they’re all about concepts in that Academy. However, Whittier’s own way of organizing things with components, formulas, and principles is definitely a new take on BJJ. It is, however, one that will truly accelerate your progress through the sport! An instructional well worth owning.