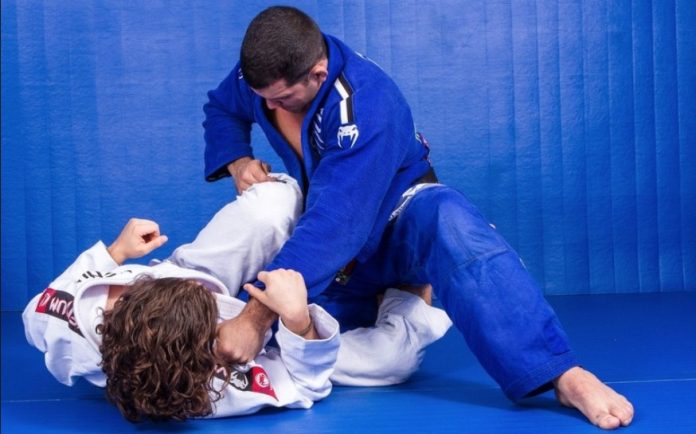 The Half Guard is a very diverse position in Brazilian Jiu-Jitsu. It can be effective from both the bottom and the top position. However, the bottom aspect has the advantage, in my opinion. It allows for both more control and more attacking options. No wonder that the bottom half guard is the favorite position of many of the highest level grapplers. People like Caio Terra, Eddie Bravo, Ryan Hall and Bernardo Faria, to mention a few, have built great careers on a half guard game.

As efficient as the half guard is for the bottom person, it is twice as frustrating for the top one. Passing the guard of a great half guard player can be a tough thing to manage. Even top pressure passers, like Rodolfo Vieira have encountered difficulties in passing the half guard. So many variations are at the disposal to the bottom player, that getting through the half guard may seem an impossible task. Luckily, there are certain strategies that can be employed to neutralize even the most dangerous of half guards.

Understanding The Half Guard

Before thinking about passing, we have to understand the half guard and its mechanics. A good half guard player is going to look for a few very important principles of the game, in order to be successful.

First, they’re going to be looking to stay on their side. This keeps their back off the ground and opens up more offensive angles. It also shortens the distance allowing for easier defensive maneuvers. Secondly, they will look to build a strong structure. This means that the elbow of their bottom hand is always kept close to the body. Isolating this arm provides a great lever, shifting advantage towards the passer.

Next, whenever you’re passing the half guard, be prepared for a battle of underhooks. The top arm of your opponent is always going to look for an underhook. Despite some great options available from there, the deeper the underhook is, the bigger the trouble for you will be. So stay away from the underhook, and, even better, get one of your own!

Keep in mind that your opponent is going to be looking to move actively all the time he/she is in the guard. This allows them to manipulate space until they set up a sweep ora submission. It also prevents the top person from smashing them, pinning their back to the ground. Be wary of distance as well. The closer you are to their upper body, the more options the bottom person has.

As previously mentioned, the winner of the underhook battle is going to have the upper hand. It is the key to passing the half guard. Once you obtain an underhook, you can look to employ a pass. Your opponent, on the other hand, must remove the underhook before looking to start a game of their own.

The key to getting the underhook first is recognizing your opponent’s attempts at one. Closing the space they need for an underhook is going to keep you safe while you get one of your own. Afte that, you can dictate the direction of the match thanks to your superior positioning.

A good way to ensure that your opponent can’t counter you is to tie up their legs. By pinning the legs together you can ensure that they have no chance of using a knee shield. From there, the crossface is a great way to keep your opponent from escaping until you get into position for a pass. A good crossface pressure is going to limit even the best half guard player. Make sure you spend time learning how to be extremely heavy from the corssface.

One more thing to look for is that bottom arm we mentioned. getting the opponents bottom arm away from the body is not only going to provide you more control, it’ll make the crossface easier to get.

Turning The Pressure On

A great approach to battling a proficient half guard player is tiring them out. This can be easily achieved by making them do things that they do not want to, but absolutely have to in order to maintain the position. This often results in mistakes or openings that will allow you to impose your own game.

Putting pressure on your opponents is a great way of causing discomfort. Pressure includes not only correct weight distribution but also proper angles and movement. Pressure is nothing but dead weight without direction. While an opponent might be able to deal with dead weight, dealing with a specifically directed force is a whole different problem.

In terms of pressure, even if it doesn’t result in a mistake it’ll achieve two important things. One is discomfort, while the other is the opportunity to free your leg. Getting your knee free from the opponent’s thighs is crucial for passing the half guard.

It’s All In The Hips

So now that you have an underhook, you’ve flattened your opponent and have pressure on, it’s time to finish passing. The best way is to use your hips. The structure you’ve built so far is going to allow you superiority in the position anyway.

As a rule of thumb, the hips have to stay close to your opponent at all times. This decreases the opponent’s options to sweep because your center of gravity is low. It also kills the space between you, taking away his leverage. Keeping your hips low is going to maintain the pressure on your opponent during the pass. This all but guarantees that the pinned and under pressure opponent is going to have no chance but to let you pass.