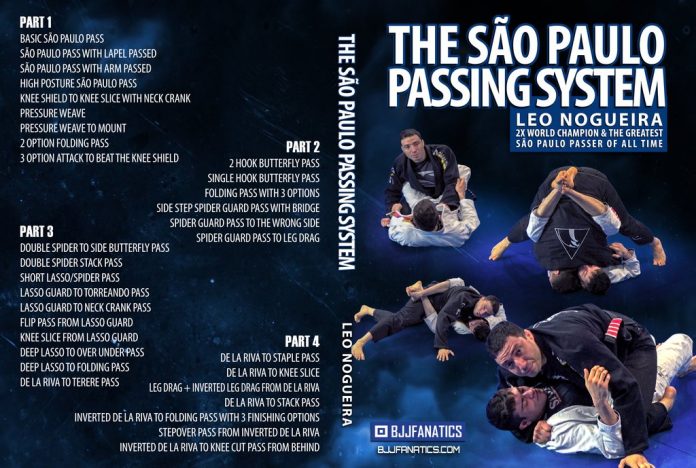 The closed guard is no longer a position that creates nearly as many struggles as it did when BJJ first appeared. Well, not for those that have a few ways of passing it, anyway. The truth is that the options to get out of the closed guard are numerous and they do go beyond standing opening and the basic knee opening. Even if you get your posture broken, and you’re trapped on top of your opponent, you can still pass. In fact, you can pass better. How? Well, the “Sao Paolo Passing System” Leo Nogueira DVD is the complete blueprint on one possible way. Well, more than one, really.

A Leo Nogueira DVD on the Sao Paolo Passing System. A world champion and highly renowned black belt demonstrating the most devastating way to pass the closed guard. Of course, you’re interested. I went over this DVD several times and I’m still hooked to watching it! It is a real treasure if you ask me. Information on the Sao Paolo pass is scarcer than you might imagine.. believe me. Ever since I got a serious knee injury, this turned into my best option of passing the closed guard. And, I have done my research very thoroughly. Leo Nogueira’s instructional is by far the best possible resource on this passing system. Plus, there are more passes that you can connect to the Sao Paolo fro an unstoppable top game!

How to Pass Everyone’s Guard with Leo Nogueira

Leo Nogueira is a Fabio Gurgel black belt and Alliance team, member. Interestingly, the 31-year-old is originally from Sao Paolo, Brazil. The heavyweight started training at 16 and became a world champion as early as a blue belt. Soon after that, he changed camps, choosing Alliance as his base of operations. It turned out to be the right choice as he won a bunch roe World, European and Pan titles. He got his black belt in 2009 after becoming the brown belt IBJJF world champion.  With notable wins over the likes of Buchecha, Keenan Cornelius and Xhande Ribeiro, Nogueira established himself as one of the top heavyweights out there.

The one thing people recognize Leo Nogueira for is the Sao Paolo Passing system. He is not the inventor of the Sao Paolo pass, but rather the man to take it to new heights in modern BJJ. The Sao Paolo, or Tozi pass came to us courtesy of Roberto Tozi somewhere in the early 2000s. It broke all the rules of conventional closed guard passing and still worked like a charm. I mean, when Roger Gracie integrates a move in his game, that alone is enough of a testament to its efficiency, isn’t it?

Given that Tozi himself was a heavyweight, it is only natural that another heavyweight would have tremendous success with his passings system. Enter Leo Nogueira, whose keen mind and endless hours on the mats transformed the Sao Paolo into the most powerful guard pass of today. And there’s now a Leo Nogueira DVD out there, explaining it in great detail, over four volumes filled with high-level grappling information!

This Leo Nogueira DVD is organized like most BJJ DVD instructionals of today. It has four volumes, follows a clear progression and delivers a bunch of never-before-seen information. The one thing that makes it special is the choice of subject. Even if people tried to cover the Sao Paolo Passing system before, no one is more versed with it that Nogueira. Leo is a master competitor, but he is also an amazing Jiu-Jitsu instructor as well. You can tell that he has years of experience with the Sao Paolo pass simply form the depth of his understanding of the technique.

The DVD starts with an introductory course to the Sao Paolo. From the basic Tozi pass to some modern-day Nogueira innovations, it’s all in volume one. The second volume widens the scope, looking into using the Sao Paolo system to pass other guards. Some of those that feature are the butterfly, spider, and lasso guards. Speaking of the lasso guard, There’s an entire volume (the third one) dedicated to dealing with this pesky open guard. Nogueria ends with a volume on De la Riva and leg drag passes that use Sao Paolo passing principles.

Kicking things off is a section on the Sao Paolo Passing system basics. In fact, at this point, it is more of an explanation of the pass itself than the whole system. The most basic variation of the Sao Paolo is, after all, the position zero of this Leo Nogueira DVD. Speaking of basics, there are many more variations here, then you’ve seen anywhere before. From passing with the lapel in hand to passing with a high posture, it is all in there.

The second position of the first volume focus on how you should move once you set the pass up. This is where most people mess things up, so make sure you pay close attention. Weave pressure is integral, and no one can explain it better than Leo Nogueira. Options include passing with a neck crank, pressure weaving t  mount, folding and much more!

In the second volume, this Leo Nogueira DVD opens up, literally. Instead of focusing on the closed guard, Nogueira witches focus to open guards. If you’ve ever seen Roger Gracie fight, you know that he likes to use the Sao Paolo passing system against the butterfly guard. That’s exactly where Leo starts. he offers great ways of rendering the butterfly guard useless and passing with ease. There’s a folding pass thrown into the mix that really makes it impossible for anyone to retain the butterfly guard.

A large portion of this part is also dedicated to passing the spider guard. For anyone regularly training in the Gi, the spider guard is one of the major nuisances during rolling. Well, it turns out there’s a Sao Paolo solution to the problem. in fact, there are several, in the form of passing to different sides, or even a crazy one with a bridge.

Volume three turns the attention to the biggest nightmare of Gi Jiu-Jitsu – lapel guards. In particular, this is the portion on passing eth lasso guard, which most practitioners out there will find more than useful. This is also the largest part of this Leo Nogueira DVD containing almost a dozen different chapters. Passing starts from the spider guard but soon moves on to different ways of dealing with the lasso.

The way Leo Nogueira passes the lasso guard depends on the guard variation. He includes options to dismantle the basic lasso, the deep lasso, and even the short lasso. In terms of passing, everything from torreando and knee slice all the way to flip passes are included. While these are not Sao Paolo passes per se, they’re still a part of the Sao Paolo passing system. As such, they offer a versatile and innovative way past the lasso guard.

Finally, we have a volume that turns to the De la Riva guard and all accompanying variations. Here Nogueira offers different passing variations, starting with the staple pass. This is one of the best passes in BJJ, and it is dreadfully underused. That said, it ties in perfectly with the Sao Paolo Passing system. Moreover, there are leg drag variations, like the inverted leg drag that will blow your mind!

A few more passes, in the shape of folding, passes, backsteps and even a stack pass asl omake an appearance here. They’re a clear demonstration that this Leo Noguera DVD is anything but one dimensional. Moreover, they offer neat ways of taking the Sao Paolo much further than it can go on its own!

All in all, the Sao Paolo PAssing system is finally no longer a riddle. Thanks to this Leo Nogueira DVD, we now know the secrets behind this devastating pass. but this is more than just a simple guard passing DVD. It is a blueprint for connecting every aspect of your top game into a foolproof gameplan!