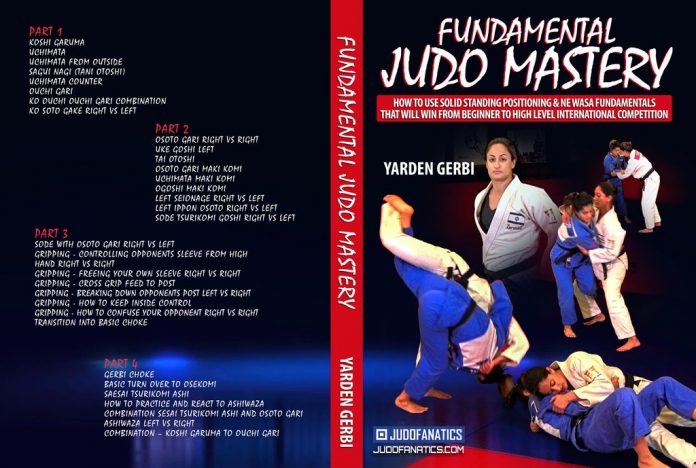 Yarden Gerbi is an Israeli Judoka who is one of the best grapplers in the world today. She is a highly regarded black belt and World Champion, as well as an Olympic medalist. She is also one of the best when it comes to teaching Judo. Now retired from international Judo competition, Gerby certainly has some time on her hands. And, we’re grateful that that time brought about the ‘Fundamental Judo Mastery” Yarden Gerbi DVD. It is basically a blueprint to beat anyone, In Judo or BJJ, regardless of level and with absolute certainty!

In this day and age of countless DVD instructionals, both grappling, striking, MMA and any other, those with by female martial artist are really rare. I couldn’t think as to why this is, given that most times they’re actually much better instructors than their male counterparts. So, when I came across a DVD with a female instructor, moreover a World Champion and Olympic medalist. This Yarden Gerbi DVD is a great refresher in the world of digital grappling instructionals. Picking up the Fundamental Judo Mastery DVD set is a no-brainer for a whole host of reasons. Read on to discover what some of them are.

Who Is Yarden Gerbi?

Let’s take a peek into the career of the amazing Yarden Gerbi before we go any further with her DVD. For one, she is a 29-year-old Judoka, that was born in Kfar Saba, Israel. She had an impressive Judo career, conquering pretty much everything a Judoka would hope for. By the age of 24, she was already five times national champion of Israel. On top of that, she won the 2013 World Judo Championship in the 63kg division. Furthermore, Gerbi got a bronze medal for Israel in the 2016 Rio Olympics, just before announcing her retirement from international competition.

Gerbi started practicing Judo at the early age of 6. From the first moment, her coach was Shani Hershko, who was also the national women’s Judo coach. She started dominating the Judo scene around 2007 when she won her first Israeli National Championship. Success and medals at tournaments like the Belo Horizonte World Cup, Baku World Cup, and European Judo Championships soon followed. It was not until 2013 though, that she really hit a stride, winning the world title in Rio. three years later, once again in Rio, she won the bronze medal in the Olympics to crown a very rich and impressive Judo career.

Gerbi is known as an aggressive and attacking Judoka. She is also an innovator and is probably most famous for her Gerbi choke. If you haven’t seen it so far, it is a modification of the Peruvian Necktie to an extent. What Yarden did is modify this highly effective choke to fit Judo needs. SHe introduced lapels into the mix, making the choke that much tighter and more difficult to escape. And yes, this choke features in the “Fundamental Judo Mastery” Yarden Gerbi DVD.

To be honest, learning from a lady grappler is a preference for me whenever possible. As a smaller framed grappler, I find that technique is the only way to get the upper hand on larger and stronger opponents. Well, there’s nobody better at pure technique than female grapplers. it is not just smaller grapplers though, that need to learn from female grapplers. Everyone is going to benefit from becoming more technical, and, as Yarder Gerbi can demonstrate, the ladies are in prime position to teach us that.

This Yarden Gerbi DVD set has four total volumes, filled with integral Judo information. The first and second volume focuses on the most effective throws and sweeps Judo has to offer. It is not just a demonstration of techniques though, but also of ways to outsmart an opponent and set them all up perfectly. Volume three goes deeper into the realm of Judo grip fighting than any other I’ve seen so far. Moreover, every little tip and trick is completely transferrable to BJJ as well, so pay attention to this one. Finally, volume four of the ‘Fundamental Judo Mastery” instructional goes over some neat sweeping tactics, along with the famous Gerbi choke.

Just like the name of this Yarden Gerbi DVD suggests, the opening volume is all about the fundamentals of Judo. However, she doesn’t teach you how to break fall or hold someone in a Kesa Gatame position. Instead, Gerbi focuses on the most effective Judo throws that are simple and basic by nature. Conversely, they’re also the highest-percentage throws in the entire sport. As such, they have a perfect carryover to BJJ and are even useful for MMA.

The subjects covered in this first volume start with the hardest Judo throw you can master – the Uchi Mata. Yes, it is a fundamental throw, but it requires a lot of precision and technical knowledge. luckily Gerbi knows all about it, and more importantly, she knows how to teach it. Almost half of the first volume is all about the Uchi Mata. And that includes an awesome Uchi Mata counter. It is also the best way to learn everything about the throw, outside of getting a private with Yarden.

Other subjects include the Tani Otoshi (a favorite of mine). There’s also great info on the Kouchi and Ouchi Gari, plus a great combination of them both.

In the second volume of “Fundamental Judo mastery” Yarden continues to explore the basic throws of the sport. here, moves like the Uki Goshi and Tai Otoshi are among the opening chapters. There’s also a real Osoto Gari masterclass in here. As simple as that sweep might be, it is also crazy effective and is particularly useful to BJJ grapplers.

Also in this volume, Gerbi introduces some tactical work. In Judo, it is very important how you position yourself in relation to your opponent. She covers the basics of same and opposite side stances and grips for executing various throws. Furthermore, moves like the Ippon Seio Nage and Sode Tsurikomi also feature, bringing in crazy amounts of variety to the throwing game. The ever-present Uchi Mata also features again, this time from the Maki Komi perspective. With volume two of the Yarden Gerbi DVD, we put a wrap on throwing techniques and move to different fundamental aspects of Judo.

I was stoked about this volume of the “Fundamental Judo Mastery” Yarden Gerbi DVD instructional more than any other! Suffice to say, I was not disappointed. That said, this DVD is all about grip fighting. If you think grips are important in BJJ, you should see the difference they make in Judo. Basically, the first one to get superior grips gets the chance to send the other person flying.

First of all, gripping is divided into two categories in this volume. The first is according to stance, meaning you get right vs. right and left vs. right. next up ti is the position, meaning sleeve and collar grips, either high or low. From there on, Gerbi teaches how to control opponents as well as how to free yourself from a dangerous grip. But it doesn’t stop there. There’s crucial information on how to actually use the grips once you get them. That includes braking posture and even ways of confusing your opponent by switching grips. A basic choke entry off of successful grip fighting completes this volume.

Volume 4 – The Art Of Sweeps

The opening sequence of this final portion of the Yarden Gerbi DVD is going to be particularly of interest to Jiu-Jitsu folks. It contains the insider details on the Gerbi choke. Let me put it in simple terms – this choke is brutal, effective, easy to get, and works every single time! Gerbi herself has used it to win countless Judo matches at the highest levels.

Apart from the Gerbi choke which takes up the first chapter, this volume is the ultimate Ashi Waza or sweeping guide. From basic turnovers to deadly sweep combinations, this is the perfect DVD for people that don’t like shooting for takedowns or going for upper body throws. Moreover, it contains a blueprint on how to practice all the sweeps in order to master them in record time!

“Fundamental Judo Mastery” is much more than just a Judo DVD. It contains crazy amounts of grappling information applicable to just about any grappling martial art. Moreover, this being A Yarden Gerbi DVD,  you’re getting information from a World Champion and Judo Olympian. Plus, it’s all as technical as hell. What more could you want?

BJJ World - 0
Techniques beats strength is something you'll hear or read in just about any Brazilian Jiu-Jitsu academy around the world. Let me tell you how...