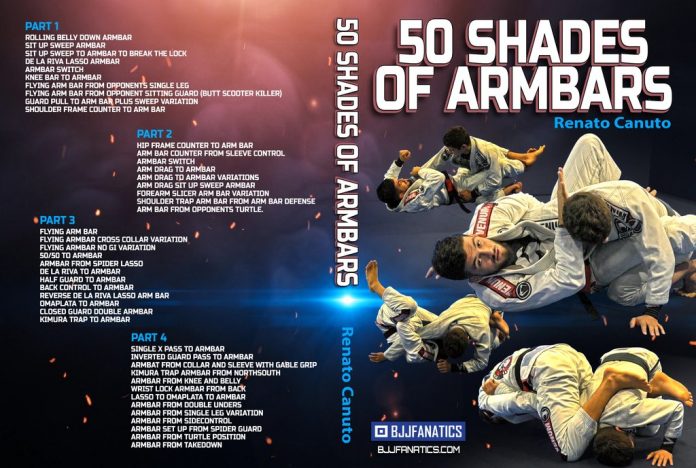 How many armbar variations do you know? Can you hit the armbar with laser-like precision from everywhere, or do you just go for one well-practiced finish? Renato Canuto is the man that knows pretty much all there is to know about one of the three most classical BJJ submissions in existence. The armbar, or straight armlock submission, is a trusted tool of grapplers of all kinds. Small or large, female or male, old or young, flexible or stiff, whatever the case is, the armbar is a good fit for anyone. Plus it can be tailored to all belt levels since it’s among the first submissions you learn. Below is a comprehensive Renato Canuto DVD Review, dissecting his latest “50 Shades Of Armbar” instructional. Enjoy!

Renato Canuto and armbars. These are the only three words I need to be convinced about a video instructional. yet, it is understandable that some people might need more. So we’re here to oblige. The armbar is a submission you can use at all belt levels, learning all the hidden details along the way until you reach a black belt. This is exactly where the latest armbar related video instructional enters the frame.

Renato Canuto is a grappling magician who doesn’t shy away from submissions. His impressive 56% ratio of armbar submissions over all others clearly points to what his favorite way to win is. Now, it is time to learn a few of his secrets and improve your own armbar game. His latest DVD is a great resource for both the beginner and advanced student alike. There are 4 information-filled volumes that are going to cover every aspect of the armbar submission for BJJ. Check out the detailed Renato Canuto DVD review to learn more about his “50 shades Of Armbar” instructional.

A White To Black Belt Submission

The armbar, or Juji Gatame or straight armlock is one of the oldest submissions moves in the history of martial arts. Furthermore, along with the rear-naked choke and the triangle choke, it is a member of the Holy Trinity of BJJ submissions. As such, the armbar is the perfect submission for both specialists and position fighters. An armbar has its place in the arsenal of everyone, from sub-only grapplers to IBJJF experts. Whether you’re hunting for it, or just take it when it comes, you need this Renato Canuto DVD to take your armbar game to the next level. Or several levels up, for that matter.

The armbar is a timeless classic because it works just as good at the black belt level, as it does when you first give it a try. Normally, there’s a mountain of details between the two, but still, the mechanics remain unchanged. For an armbar, you need to hug your opponent’s arm between your legs with your calves over their face and chest. The break comes at the level of the elbow joint. The position allows your hips to press the elbow in a direction opposite of its natural bend. Since our legs are many times stronger than our arms, this means you apply unstoppable force when you have ti right.

A great advantage of the armbar is also the fact you can do it from anywhere. While with other submissions this is mostly the case figuratively, with the armbar it is literal. Renato Canuto hits them from the mount, the guard, side control, flying in form the feet, from the back and plenty of other positions. As our Renato Canuto DVD review will show, he has a great system that makes arm baring people easy and logical.

A black belt since 2016, Canuto is a real warrior, amassing an impressive win record at the highest level in just a couple of years. The son of esteemed black belt Valdir ‘Tio Chico” Canuto, Renato was no stranger to BJJ from a really early age. The impressive 22-year-old actually began his grappling exploits with Judo. Renato stepped on the mats to compete as early as a month in his BJJ training. A child at the time, Renato showcased incredible talent even then, committing completely to Jiu-Jitsu.

Today, Renato coaches at the Drysdale’s Academy in Vegas, as part of the Zenith family. Competing actively for most of his teenage and adult life, Renato got his first world title as a brown belt. Since then, he has added a bunch of impressive titles to his name, the likes of IBJJF World No-Gi champion, Kasai Champion, UAEJJF American champion and a bunch of others.

The lightweight has an impressive 41 wins at black belt, most of which are via his favorite lock – the armbar. Along with a very unique style of grappling, thanks to years of work with Drysdale, Leo Vieira, his father and Rodrigo Cavaca, Canuto is now one of the most fearsome grapplers at the moment. The “50 shades of armbar” instructional lands at the perfect time and we have the first Renato Canuto DVD review ready and waiting!

Doing this Renato Canuto DVD review was a real pleasure. First and foremost, I am a fan of his grappling style. Next up, I do enjoy hitting an armbar or tow, to say the least. While I do not consider my self a proficient armbar hunter, I do place a lot of trust in the submission. Especially now, after going through the “50 shades of armbar” DVD instructional with a fine-tooth comb.

What do you get with this incredible DVD? The answer is more than 40 high-level armbar setups and finishes from the position you never even thought of. And you’ll learn them all from an armbar virtuoso in Renato Canuto. One thing is for certain – you’ll hardly use an armbar again if you follow his instructions.

If you expect a carefully put together system explaining how armbars work, you might be in the wrong place. Yes, you’ll get the 101 on armbars but far from a philosophical DVD. This one is old school, by an armbar specialist for all armbar enthusiasts. Renato Canuto starts his instructional with a bang in the form of a belly-down armbar with a smooth-rolling setup. From there on its armbar bonanza.

What follows suit in the first volume are armbar setups from the bottom. The sit-up sweep to armbar transition is one that nobody really expects. The best part is that Renato offers a way to defeat any defense your opponent tries to put in place. The De la Riva armbar is also pure gold since it uses a lapel to set things up. My favorite from this first volume is the armbar setup fro ma kneebar. I actually had to cut the Renato Canuto DVD review short to give this one a try, before getting back to it. And it’s a real crowd-pleaser, to say the least.

And, if you thought you’d have to wait for flying armbars until later on, you were wrong. Right off the bat, you get a few top-notch setups. What’s best is that they start off single leg attacks by your opponent, making them the perfect unexpected counter.

The second DVD goes into counter-attack territory. Here, Renato demonstrates a few great ways to counter different positions with armbars. There are options to counter sleeve grips, hip frames, and a very very cool switch armbar. As the volume progresses, Renato goes into the arm drag as a means of getting armbars.

What really makes this DVD stand out from others is that it offers a direct submission option of the armbar itself. And they’re nothing like ordinary subs. For example, one is a really wicked forearm slicer that’ll destroy your opposition. In terms of innovative concepts, Renato takes the armbar a lot further than any other grappler. He, for example, likes to use a shoulder-trap system to make armbars inevitable.

As you’d expect, Renato progressively gets into crazier and crazier territories. Flying armbars are the mark of volume # 3 and there’s no holding back. Here, the flying armbar setups are all about offense, though. There are three in total, with the second one, a flying armbar from the cross collar grips standing out in particular.

There’s also a really sneaky armbar from the 50/50 guard that finally cleared up how to set an arm submission from there. The craziness then takes a sharp turn though. This change of pace and techniques made this Renato Canuto DVD review a real pleasure and refreshment, to be honest. There are amazing setup details for hitting armbars from guard positions like a half guard and the De La Riva. There are also great tips fro lapel guard players from the likes of the reverse De La Riva lasso guard.

Finally, Renato throws the kitchen sink at us. Armbars from literally everywhere. Passing a guard? There’s an armbar. have someone’s back? Armbar again. Perhaps you have a wrist lock or Kimura battle going on? Leave it and do an armbar. this is pretty much how Renato grapplers, actually. Whichever position you find yourself into, there’s, you guessed it, an armbar! The knee on belly armbar is particularly vicious, with insane details on both the knee on belly and the submission. There’s even an armbar from a takedown in there.

Renato has found a way to insert an armbar setup in virtually every BJJ position you can think of. The final volume contains more info than the others, as it seems Renato was running out of space and had lots more to teach! R