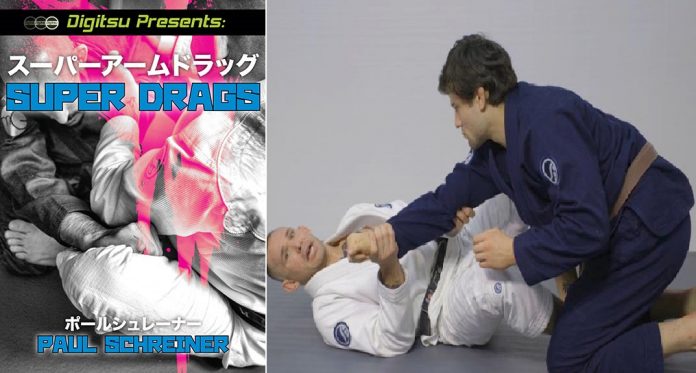 We always talk how the best way of being highly efficient in BJJ is to use staple moves that are proven to work. In fact, we go as far to look into the staples of other arts when we look to borrow certain moves or techniques. One such example is the Arm Drag. You can hardly see aa wrestling match that goes without it, and there’s a great reason behind it. Arm Drags work, whether you’re a high school wrestler or a UFC champ. Moreover, they also work perfectly for BJJ. But what if I told you that BJJ can actually take this wrestling staple and take it to a completely new level of efficiency? All it takes is a look at the brand new Paul Schreiner Super Drags DVD. Check out the detailed review.

Training BJJ in the Gi? Go for an arm drag. Grappling in No-Gi? Hit an arm drag again. Stuc kat the bottom of the guard? Arm drag yourself to a better position. Looking for an effective way to attack form the feet? You guessed it – go for an arm drag. However you look at it, the arm drag is hugely effective in Jiu-Jitsu. However, instead of just sticking to the old wrestling classic, why not take this concept and build on it? One of the best black belt teacher out there Paul Schreiner certainly did. Now, he is ready to share it all with you in his two-part Super Drags DVD instructional.

The Power Of Drags

Wrestling or Jiu-Jitsu, arm drags work! However, you can’t just rely on the one straight forward arm drag we ll love to use. Well, okay, you can, but why limit yourself? Why not turn the arm drag into a concept-based system that is going to work Gi and No-Gi, standing and on the ground? That’s exactly what Paul Schreiner did. The Claudio Franca black belt is one of the ratest minds in Jiu-Jitsu today. he has been a black belt since 2007 and one of the greatest innovators in the game. 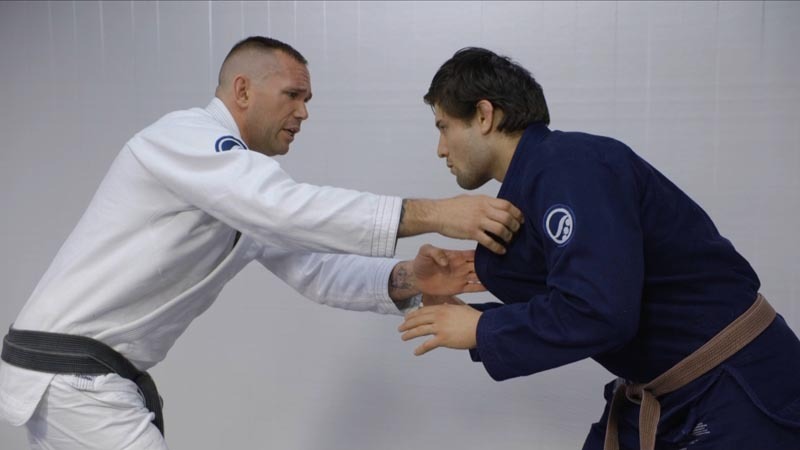 Dealing with huge injuries, mostly to his knees, he never turned to toe the competitor he couldn’ve been. However, he got all his energy into teaching instead, and has come up with some of the best grappling concepts of today! In fact, he has a game that’s so well rounded that he can talk in detail about every imaginable BJJ position.

Of course, with such a cerebral approach to the Gentle Art, you’d expect Paul to explore arm drags. After all, they work like crazy in just about any combat sport setting there is. Well, Pauls take on am drags is different to most. In fact, the Super Drags DVD is downright revolutionary. Paul managed to harness the power of arm drags and even multiply it. As you’ll see from his instructional, Paul has entire guard systems, as well as some crazy counties and sequences built around the Arm Drag.

As far as DVDs that will change your approach to Jiu-Jitsu go, this one ranks along with the best of them. It is conceptual, it is technical it is well rounded and fir for anyone. Plus you have Paul Schreiner doing all the teaching for over two hours. What more could you want from a BJJ instructional?

What you get in this DVD is a couple of hours of premium instructions on anything arm drag related. There are two volumes, each containing in excess of 20 chapters. The chapter is further organized into sections that cover specific drag types or complete sequences. The super drags DVD actually has it all – drags,  chokes, arm locks, sweeps, transitions. they’re all highly organized and all based on the arm drag. What’s better is that it all works perfectly for grapplers of any level. Why? Because of it si concept-based rather than just a collection of unrelated techniques.

This is exactly why I value Paul Schreiner DVDs so highly. He is on the people that are actually experts at teaching Jiu-Jitsu. As much as you might think teaching is easy, it is not. Not every great competitor is also a great teacher. With Paul, there’s no doubt that he is one of the best ever. He is easy to follow, speaks clearly, is comprehensive and has a wealth of knowledge. IF you’ve never seen any of his other instructionals, you might want to re-visit them after checking out the Super Drags DVD.

Contrary to what you may expect, the first volume of the Super Drags DVD does not start standing. Instead, paul Schreinercovers the seated guard and how you can use arm drags from there. First up are key principles – arms control, braking balance and executing the basic arm drag. From there on, he talks about the endpoint of most BJJ arm drags – back control. Paule goes deep into controlling the back and finishing, instead of just showing you how to arm drag yourself to the position.

The next section covers one of the most innovative uses of arm drags – the double drag. As far as double drags go, you suddenly have double the attacking options. Paul’ system covers Omoplatas, arm locks, back take and even getting to the Single leg X guard.

A collar tie drag follows befoe another section covering a mini system. This time it is the 2-on1, the arm drag’s next-door neighbor. Schernier’s take on it is to use it to get to the back or mount positions. A really important part of the instructional ls the one on how to deal with arm drag counters and how to use the re-drag.

Volume two is where things to the next level. here, Paul Schreiner covers some more complex and intricate methods of suing drags in Jiu-Jitsu. The collar drag, which is actually one of the best possible Gi guards you can play is a major one. Paul starts with grip fighting and moves on to cover transitions first. From there on it is all about the finishes, which come in the form of Omoplatas loop chokes and some crazy effective sweeps. the Margarida sweep si one to keep an eye out for.

Just when you think it is all done and dusted, it is time for the actual centerpiece – the super drag. After all, this is the Super Drags DVD. This is Paul’s brainchild and is essentially a supercharged arm drag. here, you get to learn it all – standing, seated, same and opposite side drags, getting the crucifix and much more. In fact, the crucifix plays such a large part of the system that there’s an entire section with half a dozen submissions from there.

Finally, there are a few drills to ensure that you keep your arm drag game crisp and smooth.

A Paul Schreiner instructional is always a real treat. However, with this one, you get an insight into how to use one of the most powerful grappling positions in a brand new and ultra-effective way. Super drags is one for the future, that’s for sure, as there’s no one using this stuff at the moment. This is the perfect time for you to pick it up and start surprising opponents and training partners alike. 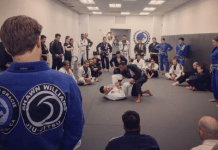