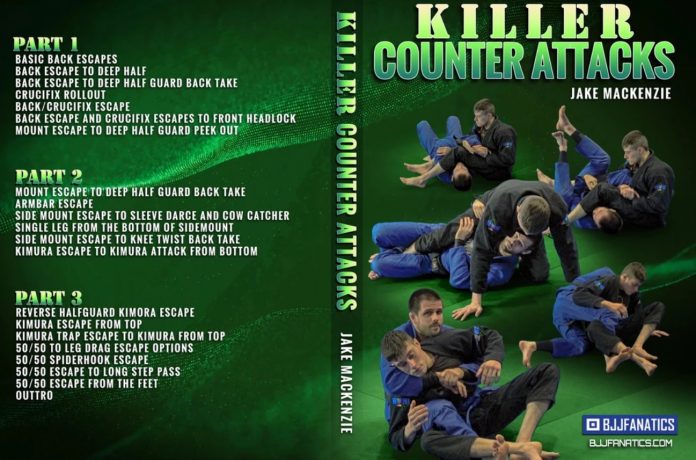 The defense is the best offense! OR was it that attacking means you do not have to defend? Well, things are not always so clear cut. Yeah, you might want to be an attacking grappler, but at one point in time, you’ll surely find yourself in a bad spot. Same goes for people who are overly defensive. Okay, you stopped a submission. But then what? This is exactly the question that Jake Mackenzie answers with his latest BJJ instructional. The Killer Counter Attacks DVD is a three-part set that covers everything you need to know about counterattacking in BJJ. Plus, Jake is one of the most technical black belts around!

In Jiu-Jitsu, everything seems easy at the beginning. You learn techniques to attack and techniques to defend stuff. However, as you get more and more into it, you see that things are not so black and white. Whenever you manage to mount a strong defense, and even get out of a bad spot, the question remains of what to do next? Do you disengage and start all over again, or do you look to turn the tables immediately? Jake Mackenzie certainly favors the latter, and his Killer Counter Attacks DVD shows you exactly how!

Jake Mackenzie And The Art Of Counters

The subject of counter attacks is not one that many BJJ instructionals cover. In fact, there are only several that are worth looking into. This Jake Mackenzie instructional is one of them. In fact, I’d go as far as to claim it is the best one so far. Why? There are several reasons, to be honest. First, Jake cover counter-attacks from pretty much every bad spot in BJJ. Furthermore, he also covers transitional counters, which is something nobody really pays attention to in Jiu-Jitsu DVDs. Finally, he offers you ways of not only defending and countering but setting counters up immediately. As far as I am concerned, this is the ultimate defensive strategy you can use in BJJ.

Jake Mackenzie is a black belt under the always entertaining Roberto “Cyborg” Abreu. Actually, the multip[le time Brazilian Nationals Gi and No-Gi champion is one of Cyborg’s first black belts. The Canadian born grappler is notorious for his half guard work (no surprise there). Mackenzie is also a highly technical and tactical fighter, with a very well-rounded game. Apart from Cyborg, he has trained with Marcio Feitosa before teaming up with Cyborg.

As one of the most distinct half guard masters of modern times, Jake’s knowledge of counter attacks is extremely versatile. After all, the half guard is a position that can turn bad quite quickly, unless you’re ready for everything. AS you can see from the KIller Counter Attacks DVD, Jake certainly is! There’s a reason why his guard is so wicked, and it is not only because of the time he spent polishing it in Brazil. It is also down to the approach he has to “bad” positions. With a sound counter-attacking game, you’ll soon find out that there are no bad positions in BJJ!

So far I’ve seen a few Jake Mackenzie DVD instructionals, they are all mostly on the subject of the guard, whether it is half, deep half or the closed guard. They’re all Gi DVDs and are a great resource to learn from. However, this Killer Counter Attacks DVD is something else. Even by Mackenzie’s standards, this instructional is really high-level. It will teach you to approach defense from a very different, and very efficient angle. To be honest, I’ve been looking at counter-attacks as the main method of defense for quite a while now. Apart from asking other more experienced grapplers, there was not much on the subject as could help. Until this instructional came along.

The Killer Counter Attacks DVD is a three-part Gi instructional that covers just about every way that you can surprise your opponents when they least expect it. For example, the first volume covers dealing with back control. However, instead of just getting out, you get to learn how to launch attacks of your own as you escape. Furthermore, the second and third volume also covers some of the most important positions in BJJ. Part two is all about the mount, side control, and submission escapes, while the final volume covers the dreaded / guard. All in all, this is a great instructional that is easy to follow and is applicable straight away, without you having to spend months figuring it out.

This instructional starts off with the one position everyone has trouble with. I don’t care if you’re a one stripe white belt or a black belt with a  year experience. Come up a back mount specialist and you’ll struggle to get out. And the main reason is exactly that – getting out. The more you look to get out, more attacks open up for your opponent. Jake Mackenzie is going to help you to put a stop to it in no time.

Starting right off the bat, jake covers some key concepts of how to address the back mount. They do differ from what you’re used to, but it all makes sense later on. For example, one spot that’s actually pretty easy to get to is the deep half guard. Form there on, you can start attacking with ease. Mackenzie offers several different ways in which you can make this transition. Moreover, he shares ways of using the deep half to actually get a back take of your own. Cool, right?

What I particularly enjoyed about the first volume of the Killer Counters DVD was the portion on crucifix defenses. This is one of the toughest positions to escape in the entire sport. Well, there are easy ways to literally roll out of it and straight into front headlock attacks. A mount escape is a final thing in this volume, serving as an introduction to part two.

The second portion looks into countering other common bad spots in BJJ. The mount is the first thing Jake Mackenzie covers, offering a great way to get to the deep half. OF course, you also get further options from there, like back attacks. There’s also a really cool mounted armbar escapes that’ll become your go-to.

The largest portion of part 2 addresses escaping side control, and all threats that come with it. Still, since this is a Killer Counters DVD, you do not get to just escape side control. The first sequence leads straight into a sleeve D’arce choke or cowcatcher. The choice is down to you. A single leg entry is the second option Jake shares, before teaching a crazy knee twist back attack to round it all off.

The final chapter of this volume is a sick Kimura escape that ends in a Kimura for you. Mind-blowing, I know!

As we get to part three of the Killer Counter Attacks DVD by Jake Mackenzie, we get into some really entertaining and useful stuff. A few more Kimura solutions are first, covering stuff like top position Kimuras and even the Kimura trap.

The real hit of this entire DVD, at least according to me, though, is the one addressing the 50/50 guard. If you get stuck in this guard without having answers you’re either going to stay there indefinitely or tap to a footlock of some sort. Well, Jake has different solutions that range from a lag drag to the back all the way to spider hook escapes and dealing with the 50/50 form the feet. Suffice to say, they all work and are extremely efficient. A short outro on connecting things and keeping a counter-attacking mindset concludes the DVD.

Jake Mackenzie is easy to follow, knows his stuff and has the pedigree to back it all up. He may not be the most famous black belt out there, but he is certainly an efficient competitor. The Killer Counter Attacks DVD is one in a hundred that actually provides viable and easy to implement options for anyone’s game. However, if you are a competitor, this DVD is simply a must-have.