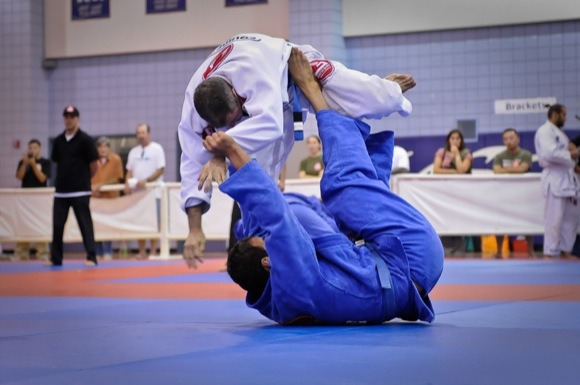 Sweeps are not a simple thing to get in Brazilian Jiu-Jitsu. We often take them for granted, but they do pose a real challenge to execute on people that have grappling experience. Apart from lots and lots of techniques, there are also lots of conceptual ways to approach sweeps. The trick is, all of these conceptual ways, although different, are effective and applicable. Throw in the possible directions of sweeping and you have quite the problem to solve. Unless you try and focus on the concept that a sweep should send the other person flying through the air with their entire body. In that case, all you need are overhead Jiu-Jitsu sweeps.

Sweeping people can be fun when you get the hang of it. However, sending them flying is way better, even if you have no idea what you were doing. Those times when you sweep someone by lifting them up and throwing them crashing to the ground always tend to cause smiles, and shouts of “niceeee” and “osss” from the sides, and even the recipient of the sweep. I guess it is that hidden WWE fan we all have inside that comes to the surface when something like that happens or when we see Dragon Sleeper Hold Submission in BJJ. Jokes aside, overhead Jiu-Jitsu sweeps area powerful weapon to have. In fact, they might just be the most powerful sweeps in the entire grappling game. 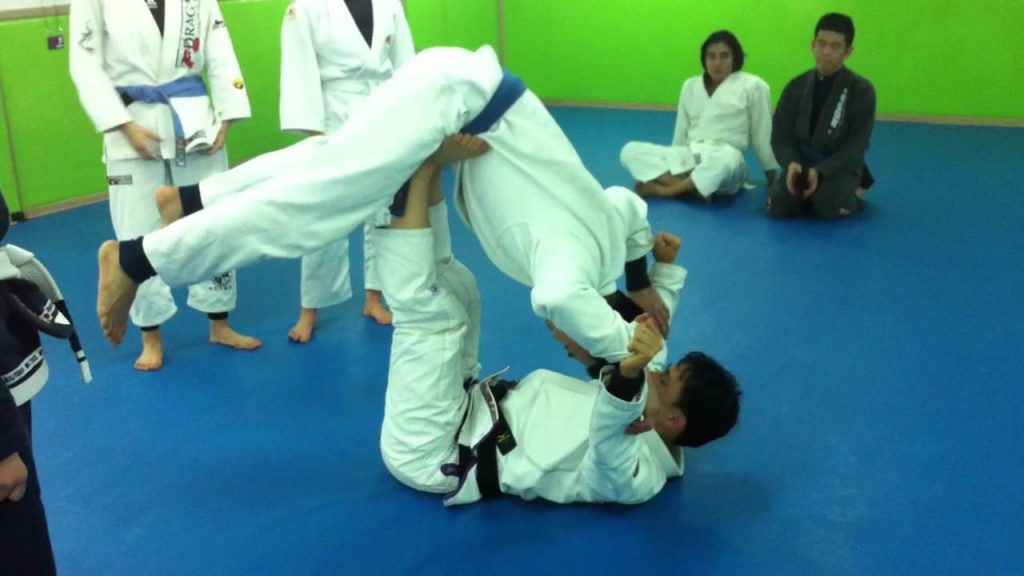 All it takes to be able to throw someone around in the air like pizza dough is a little understanding of physics. First of all, you have to know where most folk’s center of gravity is. The answer is about an inch or two below their navel.  So, what do you do with this information? Throw in one more physics principle, one that we all know and love in BJJ – the lever and fulcrum. You need to insert a fulcrum in the opponent’s center of gravity. You then use the lever principle to lift them off. That’s it.

Well, that’s it, in theory. When it comes to executing it, you’ll be hard-pressed to lift someone off the ground with your arms, turn them around in the air (again, like pizza dough) and send them flying. Unless you’re really, really strong. What this means is that we need to consider the strength of the fulcrum as well. In our case, it would mean using the strongest possible body part that we have – the legs.

Now you have the winning formula for overhead Jiu-Jitsu sweeps. Place your legs under the opponent’s navel (approximately at belt level) and you have the perfectly placed fulcrum to lift people up and start sending them flying in every direction you desire.

The Power Of Overhead Jiu-Jitsu Sweeps

One reason why overhead Jiu-Jitsu sweeps are so powerful is then an opponent can’t really stop them. They might grip your legs, or your lapel, look to counter or move, but that can only take effect once they hit the ground. While they’re projected in the air, if you’ve done everything right, they’ll be helpless. Moreover, there’s the element of surprise. Some of the overhead sweeps allow you to hold an opponent in the air for some time, meaning they won’t know when you’ll send them crashing down. Others happen so fast that they have no time to react anyway. So, the power of these Jiu-Jitsu sweeps is in the combination of the element of surprise and the feeling of helplessness that always comes with being lifted off the ground.

Technical examples of overhead Jiu-Jitsu sweeps are numerous. Below, we’ll take a look at several of them that work with a high percentage of success. As you’ll notice, the principle is the same with all of them, it is just the finer aspects of setting them up that make them different.

Probably the original overhead sweep in BJJ, although that might not be the case. The name of the sweep is from a standout competitor form the early 90s, Roberto “Roleta” Magalhães, who literally dismantled every opponent he met with this sweep. The sweep works when an opponent decides to stand up while in your closed guard.

All you need for this sweep is holding on to both sleeves or wrists. The moment an opponent stands, simply open the guard, placing your knees in the hips of the opponent. As per our breakdown of overhead Jiu-Jitsu sweeps from before, this is the fulcrum point. The sleeve grips ensure their posture is broken, plus takes away their ability to post. They also serve another key purpose – acceleration. The motion is to first take your arms (and your partner’s as well) over your head and bring them in a circular motion towards their knees. This will pull the opponent forward and into the “weightless” position, which allows you to send them flying over. You end up in mount, of course, with 6 points to your name.

In a very sneaky manner, Nicholas Meragali likes to set up an overhead sweep from the leg lasso. However, in an even sneakier turn of events, he doesn’t use the guard at all until he sets the sweep up. His starting point is with two sleeve grips, or a sleeve and collar grip. Whether an opponent stands in his closed guard, or he transitions form an open guard does not matter.

One leg goes on the hip, creating that all-important fulcrum point. The other is loose, waiting for the right time to go over the arm (lasso guard) and in between the legs, like a butterfly hook. This leg has the role of pulling an opponent forward so that the other leg can lift without the need for strength. Moreover, the lasso configuration traps the arm so there’s no way of basing for the person that goes flying.

The Tomoe Nage is a key throw in Judo but also happens to be perfect for BJJ as well. While many think of it as a throw, it does fall under the jiu-jitsu sweeps category in certain situations. A great example is the guard pull. If you pull guard and go straight to a Tomoe Nage, it’ll be considered a throw. However, if you manage to stay in guard a few seconds, and then pull it off it will be considered a sweep. This is for information purposes only, as both a throw and a sweep land you 2 points, and will give you top position, most likely mount.

For the guard pull, you need to place one leg in the hip of an opponent, usually by holding on to a collar and sleeve grip. The leg goes on the hip that’s on the side where you have sleeve/arm control. With this sweep, it is all about breaking posture. If you manage to break the posture while pulling, you’ll be able to lift an opponent up off of the same move. If not, simply stay in the position, re-adjust a bit and introduce your other leg to the hip, instead f going to closed guard.

The X guard is actually a position that has you halfway through an overhead Jiu-Jitsu sweep anyway. The thing is, most people like to do technical stand-ups or transition into leg locks from there and forget about this option.

Since you’re already under an opponent’s center of gravity you don’t need to adjust a lot. All you need to think about is taking away their post, which is one arm. Any grip will do, as long as you control the same side arm.  For the sweep just place the opponent’s arm in between their legs, get your knees to your chest and extend your legs upwards. The X guard has you in a fulcrum position and the extension will give you the lift. It is smooth sailing from there on into one of the best Jiu-Jitsu sweeps ever.

This sweep works a bit differently than the others but uses the same principles of fulcrum and leverage. The difference is in that you set your opponent’s body to run across (normal) to yours, rather than being parallel, like in the cases of other guards. In other words, you want your opponent stretched out across your hips, like a log.

All you need to get this from your favorite half guard variation is to have a cross grip and pull the arm of the opponent all the way to the other side of your body. It is similar to the X guard, with the exception of taking the arm as far away as possible to the other side, rather than between the opponent’s legs. The fulcrum is the leg that is inside the half guard. Lifting the knees to your chest will give you all the leverage you need to take even much heavier opponents over your head with ease.

Being on top in BJJ is always more beneficial than being on you back. If you come to think about it, you can only get points for coming to the top (sweep) or for top positions. That means you need to be able to sweep anyone from anywhere if you want to come to a dominant position. Overhead Jiu-Jitsu sweeps are not just a high percentage way of achieving that but also look very cool while you’re doing it.