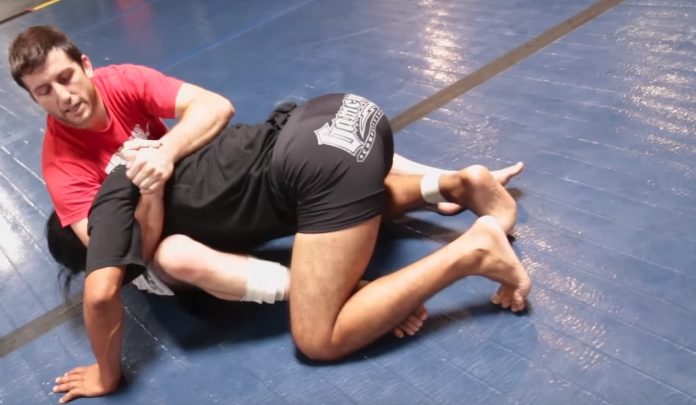 Wouldn’t it be wonderful if you had a BJJ sweep that you can rely on 100 % of the time? Yet, Brazilian Jiu-Jitsu has so far taught you that there are no techniques that work flawlessly at every attempt. Well, we’re here to break that rule and change your perspective. Today it is going to be a BJJ sweep, but tomorrow you may be the one to figure out another technique that’s unmistakably effective. All it takes is to keep an open mind and analyze everything deeply. Eddie Bravo is one of the people who truly dissects BJJ to its very core. One of those analyses gave birth to the 100 % sweep, which is as effective a the name suggests.

While 10th PLanet Jiu-Jitsu moves are notorious for their unorthodox names, these techniques seems to break that pattern. If there was a move that Eddie named simply and effectively it is the 100 % BJJ sweep. This sweep is so effective it works from multiple positions and is extremely easy to master. Furthermore, the positions it leads into are all high point positions that offer plenty of follow up submissions. All in all, this is a sweep that everyone needs and today we’ll do our best to break it down for you. And yes, it is just as effective with the Gi as it is in a rashguard and a pair of shorts.

One of Eddie Bravo’s top black belt instructors, Brandon McCaghren opens up the door to some of 10th Planet’s most important systems. His “Rubber Guard: The Meathook” DVD set is an amazing gateway into 10th PLanet Jiu-Jitsu, explained at the highest level possible!

The 100% BJJ sweep is one of the simplest moves you’ll ever learn in BJJ. Yet, if you do not have a wrestling background, it’ll come as somewhat of a surprise to you. The reason a lot of Gi based academies pass this BJJ sweep by is that of legality issues. While it is not a neck crank by itself, the sweep can end in a nasty neck crank. However, if you do not want to get into trouble, all you need to do is modify how you grip after you complete the sweep. Problem solved.

The basic position for hitting the 100% is the closed guard. The basic position that the 100% BJJ sweep leads into is side control. However, there are plenty of variations on the above. As you’ll discover further in this article, you can also hit the sweep from open guards like the butterfly guard or the half guard. You can also choose one of a multitude of positions to finish in – back control, truck, twister, mount, etc.

For the very basic 100 % sweep setup, you stat in a closed guard with one goal in mind – breaking the opponent’s posture. You need to control their posture completely if you’ll have any hope of getting the 100%. From there you should push the head of the opponent to one side of your body, similar to when you’re attacking with a guillotine. The next step is to thread your arm under the armpit of the opponent’s arm on the side where their head is. What you’re going for is a gable grip behind their shoulder. It is now safe to open the closed guard, and use the leg on the same side you’re controlling to push off the mats and sweep your opponent.

From A Guillotine Attempt

A great way to set up the 100 % BJJ sweep si with an arm-in Guillotine. Actually, the sweep doubles as a backup move to a potentially failed guillotine. Whenever you end up stuck into an arm-in guillotine you always have the 100% sweep ready to go. It is preferable that you’re in closed guard in order for a successful transition. However, even the butterfly guard is going to do the trick, as long as you control the posture.

The main thing is to maintain control over the head. This comes easy as there’s not much distance that your arm needs to travel to get the 100% grip. The side you should establish the grips on is the side where the opponent’s head is. That means you’ll need to get the choking arm out of a Guillotine position and thread it under the opponent’s armpit. This is not hard to accomplish when they’re defending the choke. Once you get the gable grip it’s smooth sailing to the end, just like before.

Taking the back is going to require a bit more maneuvering than the “regular” 100% BJJ sweep. Once you start hitting 100%, people are going to begin countering it. The thing is that they won’t be able to counter the sweep, but they’ll try to escape the final position. Since you can’t neck crank people under IBJJF rules, this means that you won’t be able to secure mount or side control as easily as in No-Gi.

What you need to do after you end up on top is to keep the grips. This is imperative if you want to establish a good position. When you end up on top and an opponent tries to turn away from you into the turtle position, the grips going to help you prevent them. As the opponent turns, use your top leg to hook their hip on the top side. From there, you’ll use a chair sit motion, sitting back over your opposite leg’s shin to pull the opponent into back control. Then you can insert the second hook and change your upper body control to a seatbelt. Or, you can see how to get the truck position instead.

The truck is a position that’s somewhat easier to acquire than the back. The first part of the transition is the same as with the back take. You’ll want to control the opponent with the initial grip and get a top hook in. However, instead of going for a back take, you’ll switch things up a bit. The goal here is to use the grip to pull the opponent’s hips on top of yours. At the same time, you want to release the grip and place grip on their near side toes. Your legs should go into a lockdown configuration on the opposite side leg (the side where you placed the hook).

The only trouble with this position is again due to rules. Under IBJJF rules with the Gi, most of the submissions available from this position are only legal at the brown belt level. Even then, some are not allowed at all, so you might end up using the truck position as just a checkpoint between the100% BJJ sweep and back control.

From Top Half Guard

There’s one setup that we also need to mention that is not exactly a sweep. While it does provide insight into how you can set up the 100 % BJJ sweep from half guard, it starts from the top. When you find yourself in top half guard and the opponent gets an underhook in, they’re begging for the 100%. Simply place the grip on their far arm, the one that’s posting on the ground. Once you wrap it up you’ll want to do something that’s frowned upon in BJJ – get on your back.

The thing is that once you get down, you won’t stay there. There are no sweep points if you do not stay on your back for longer than 2 seconds. And all you’re doing with the 100% from the top is essentially rolling on the ground. You’ll end up in top half guard but now, you’ll have complete control of the upper body so you can go directly into the mount. It is essentially a way to pass by using a sweep.

Since BJJ is all about evolution and experimentation, some people managed to figure out how to stall the 100% BJJ sweep. Once you topple them over they’ll bridge in order to try and keep you on the ground. However, unless they break the grip they’ll have a hard time establishing a top position. That said, some people are going to be able to break free due to your tweaked mechanical positioning. This is where the 2.0 version of the 100% sweep comes into play – the 200% sweep.

For the 200% BJJ sweep, there’s nothing that’s essentially new in the sweep other than your grip configuration. Instead of going for a gable grip, this time you’ll aim to thread your first arm even deeper under the armpit. The goal is to slap a figure four grip this time, just like with a rear naked choke. This is going to allow you to control the opponent with both a pulling and a pushing motion. All counters are now rendered ineffective you can go into any of the options we presented above. Or, even something of your own choosing.

Tornado Guard Sweeps And Submissions For Gi and No-Gi