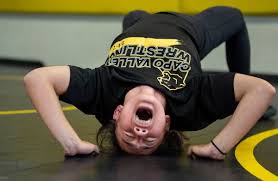 Whenever you see wrestlers train, you notice several different things. First, that training session s are grueling. Second, these girls and guys have a real heart. And third, what’s that crazy neck bridge thing they’\re doing that seems like it will snap their necks like a twig? Speaking of neck bridges, have you ever tried doing one? Just the regular, basic, neck bridge? It can be scary as hell when you first give it a shot. And then, you see all these wrestlers perform crazy windmill like moves while holding a neck bridge. Of course, you have to ask yourself how does the neck bridge relates to BJJ and should I learn how to do it properly?

The easy answer to this question is yes. Actually it is more of a categorically, absolutely YES! However, don’t just goof trying to figure out neck bridging by yourself. That is an almost certain recipe for disaster. There are levels and progressions to learning how to do neck bridges. And, if you don’t have access to a wrestling coach, try asking a wrestler. One is most certainly easy to spot on the mats of your BJJ academy.

It would be really irresponsible to head straight into one bridging and how it helps BJJ Jwihtout talking about safety first. So, whenever you’re trying to do anything neck related, be careful. Okay, that’s out of the way, now, let’s talk bridges! Nope, not so fast. Neck safety should be your number 1 concern in BJJ. I’m not overreacting, and I have the herniated discs to prove it.

Neck bridging is not a joke. Don’t’ take it lightly, as you can cause real damage to your spine by not even doing BJJ. The movement is huge and will give you a lot of advantages when rolling, but you need to learn how to do it right. It is not like the BJJ bridge where you can just start exploding after a few attempts.

The muscles that get stronger with neck bridging are the cervical muscles of your neck. They help stabilize your head and spine as well as move them in specific directions. These muscles connect to specific parts of the vertebrae. One potential injury risk is the muscles pulling ton the vertebrae during poorly execute neck bridges, resulting in herniated discs. While the exercise is designed to strengthen the neck muscles both isometrically and dynamically, it may cause more harm than good if you do not know how to do it. Neck damage in grappling is usually cumulative, so bad neck bridges won’t necessarily end up with an injury straight away.

The consequences of herniated discs can be dire, ranging from an uncomfortable tingly feeling due toa pinched nerve, to full nerve damage and muscle atrophy. Not really worth it, so stay safe when neck bridging and look to strengthen your neck, not injure it.

In BJJ, bridging is actually an extension of hip escaping. Think of it as a hip escape done with the hips as far off of the ground as possible. The wrestling neck bridge, on the other hand, is a very different thing. Once again, it is intended to keep the hips (and shoulders) off the ground, but also offers a pivot point that shoulder bridges do not. As such, it is tailor-made for the craziness of a Jiu-Jitsu roll.

How exactly does neck bridging help in Jiu-Jitsu? Having a strong and mobile neck allows you to use your head as an extra post. Your head becomes the fifth extremity you can use to help you in any aspect of BJJ. While sweeps and escapes are the most common things that benefit from neck bridging, training the neck like this can actually help you in many other areas. Both when you’re passing the guard or trying to keep a top position via pressure, head placement plays a huge role. Even when you’re keeping a tight head trap from back control, you need neck engagement. And the neck bridge makes you stronger in each and every one of these areas.

The best way to approach training neck bridging is to start frontally, that mans place your forehead on the ground and lift your but up, downward dog style. From here, you should use your hands to help you balance and take some pressure off until you’re strong enough and comfortable. Then you move on to dynamic movements in each direction. Only then, can you switch things and lie on your back to do a “proper” neck bridge. Once again, help yourself with your arms before you get to work only the neck. Remember not to rush complex moves here like going in a circle or jumping over. Step by step.

Apart from the potential for creating injuries, neck bridging has the potential for aggravating existing ones. That means that if you have a neck injury, you should probably look into the pros and cons of bridging before you go straight into it. Or, even better consider alternative ways of strengthening your neck.

The pros of neck bridging are that it strengthens your neck in a 360-degree fashion, which few other exercises can do, Moreover, it is highly sport-specific, meaning you actually get your muscles stronger in exactly the way you’ll be using them most of the time. As strange as ti may sound, strengthening your neck with neck bridges can actually decrease the potential of a BJJ-related injury when done right.

ON the cons side, neck bridges require time and patience to master. Also, every progression increases the risk of something going extremely wrong. Some people’s necks just aren’t built to take such a strain, so that makes neck bridging a movement that won’t fit every type of grappler out there. The compressive force on the vertebrae is also huge, and will eventually result in cumulative damage, though.

Finally, if you want an alternative, you could always place your head on a bench for example, and just hold statically to strengthen your neck safely. Also, you can experiment with different neck harnesses nad even elastic bands in order to lessen the compressive load on your vertebrae.

Do your neck bridging responsibly and sparingly. The neck bridge can help you build 360-degree strength like nothing else., However, you can’t just rely on this motion at all times in Jiu-Jitsu. If you use the neck bridge smartly, and the strength that you gain from it strategically, you’ll definitely add to your BJJ arsenal.