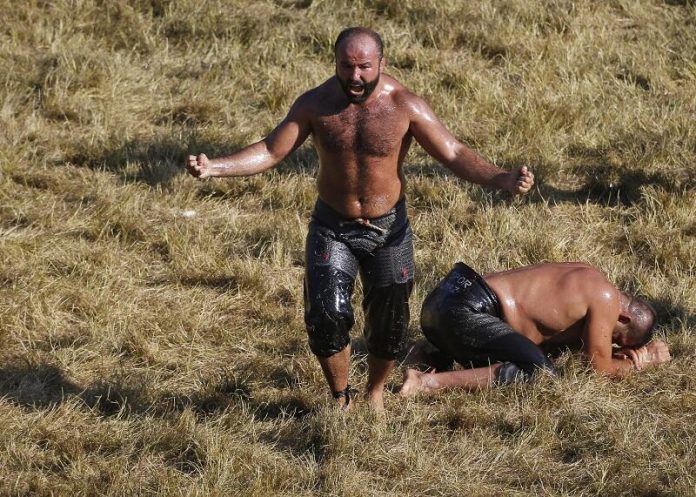 Do you know what was common for Asia, Europe, and Africa for more than 5 centuries? They all had areas that were under the control of the Turkish Empire, also known as the Ottoman Empire.  An Empire can by no means sustain itself for centuries if it is not run efficiently and adaptibility. One main characteristic of the Ottoman Empire was creating a blend of cultures.  They brought their own culture over to the places under their rule, but also adopted select parts of local culture. As the superpower they were they brought various benefits to governing countries in cultural terms. The age-old tradition of Oil Wrestling is one such cultural aspect that has managed to linger even a couple of centuries after the Empire was gone.

Origins And Rules Of Oil Wrestling 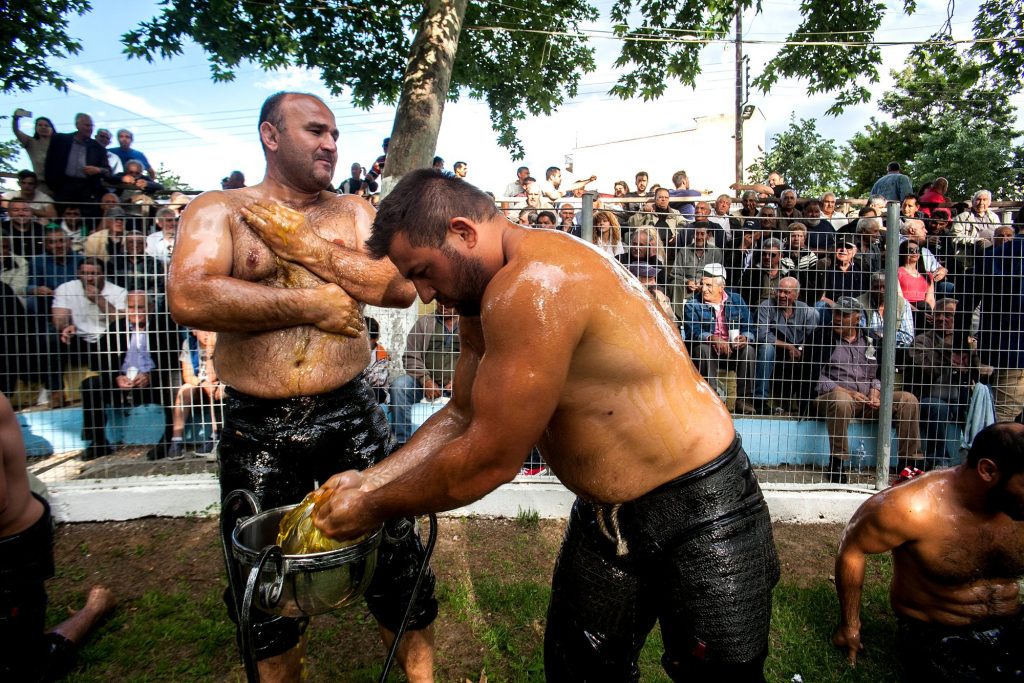 Oil wrestling can be traced back to the Perisan Empire, when wrestling was used for combat rather than a sport. This tradition spread across all Islamic countries along with other aspects of Islamic culture. In Turkey, the legend says that a couple of soldiers wrestled for fun while resting from a march. They were so evenly matched that none could beat the other. Seeing their prowess, their commander decided to award a pair of leather pants to the winner. Both soldiers wrestled deep into the night and died as a result. The place where they were buried later became a spot for wrestling tournaments and a tradition was born.

The precise reason for applying oil remains vague to this day. Some claim that it has religious roots while others point to olive oil’s protective properties against mosquitos. Whatever the reason, it became an everyday occurrence for people in the Mediterranean and it carried over to wrestling.

The oil wrestling season in Turkey lasts 8 months out of the year. It is a national sport that involves lots of teams and travels to local tournaments, all leading up to a final event known as Kirkpinar. Wrestlers are naked, but for traditional leather pants called Kispet. The Kispet isn’t just a garment though, as wrestlers reach inside them to get a better grip.

The categories of competition are 13 in total and, wrestlers are matched against one another by judges, according to weight, age, and experience. A bout can last up to 30 minutes, followed by 7 minutes overtime when scoring is introduced. Sudden death is the last. Ways to win in regulation time include exposing the belly of the opponent to the sky, pinning them to the ground, surrender or a carrying pin (lifting and carrying and opponent for 5 steps).

The Republic of Macedonia, located at the heart of the Balkan Peninsula was under the reign of the Ottoman Empire longer than any of its neighbors. Five centuries of cultural mixing resulted in the creation of traditions that have remained in place to this day. Macedonia’s citizens are predominately Orthodox Christian, with Muslims coming in second. During the Turkish reign, much of the people switched religion, going both ways, which means that traditions today are upheld by both major religions in the country. 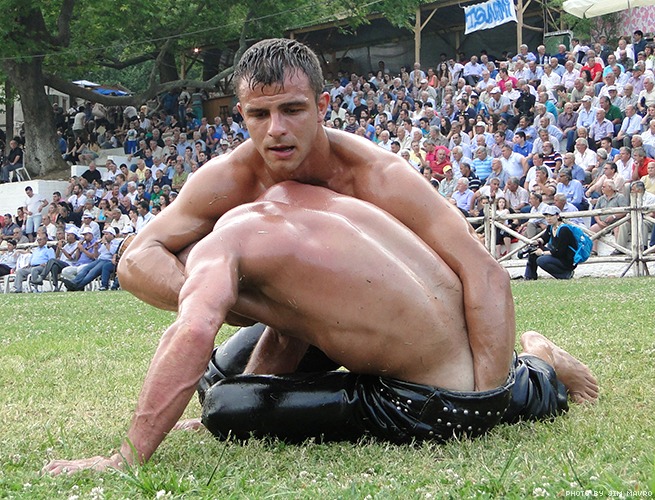 Music plays a huge part in traditional oil wrestling in Macedonia. Traditional bands of two drums and two pipes, or three drums and two pipes are an integral part of tournaments. Much like in Muay Thai, wrestlers come out with a dance demonstrating respect. Two wrestlers pass each other during the dance, brushing each other with different body parts each time. After a prayer to God, the match can begin.

In modern times, wrestling tournaments are held for various reasons, from celebrating circumcision or weddings to marking large national festivities. Traditionally, larger tournaments are held in the middle of the summer, meaning temperatures well above 100 °F. Matches last the usual 30 minutes, which is exhausting in the heat. A mixture of olive oil and water is used and the matches are held outside on large grassy surfaces.

In the Balkans, oil wrestlers are known as “pehlivans”. They represent well-respected members of the community, who demonstrate high moral values throughout their life. Pehlivans are renowned for their impeccable sportsmanlike behavior and respect they show each other. Large crowds gather to watch these events and there are cash prizes for the winners, as well as gifts from the crowd.

Pehlivans Across The Balkan Countries

While the Republic of Macedonia is by far the one most engaged in the oil wrestling tradition, other neighboring countries also take part. Bulgaria, Kosovo, Albania, and Greece all have remnants of the Ottoman culture kneaded throughout their own. Oil wrestling does have a role in their culture, albeit to a lesser extent compared to Macedonia and Turkey. 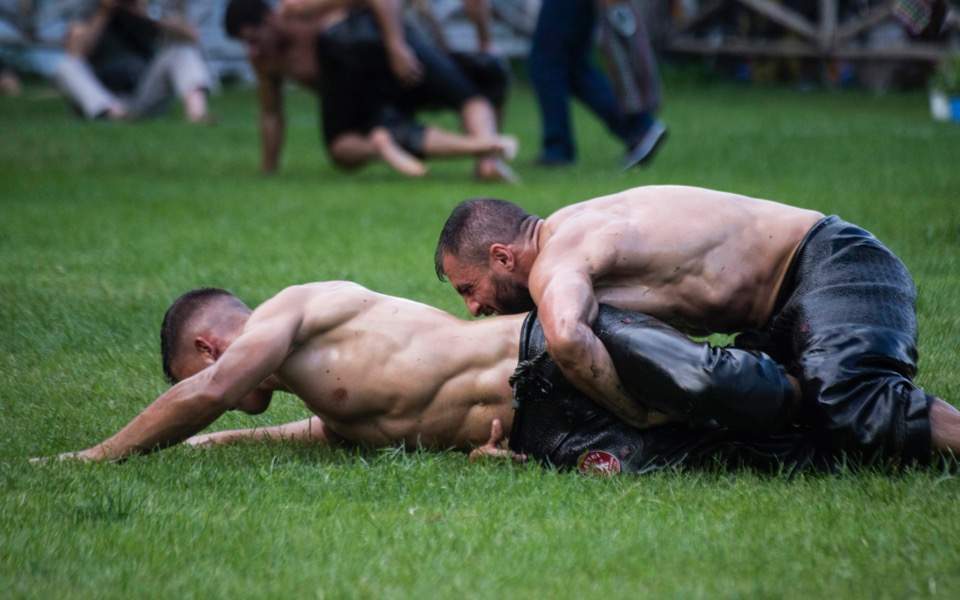 Oil wrestling tournaments organized at a regional level are a great way of maintaining the tradition. Very often, pehlivans from all aforementioned nations come together to prove their grappling dominance.  While the supremacy of oil wrestlers coming from Turkey is undisputed, the runner-up spot is often up for grabs. Lately, Macedonian pehlivans have had notable success, bringing home multiple medals from regional competition events. One standout Macedonian pehlivan, by the name of Boban Danov wrestled with one of the best pehlivans to come out of Turkey, Ertan Erkan a couple of years ago. The epic match went on for more than an hour, with the Turkish wrestler coming out on top.

Oil Wrestling is considered to be the only grappling martial art that is indigenous to the Balkan region. Add to that the traditional and cultural value and it is clear why this very entertaining sport is held in such high regard in this part of Europe.

ALthough Oil wrestling is originally from Turkey, the Balkans are the hotbed fo this interesting and unusual grappling style. This form of wrestling has stuck with the people of these regions and remains one of the best spots to see the traditional form of the oil wrestling of old. The Balkans remain a spot where you can witness oil wrestling in it’s rawest form, somewhat different from the more modern version that’s custom for turkey nowadays.