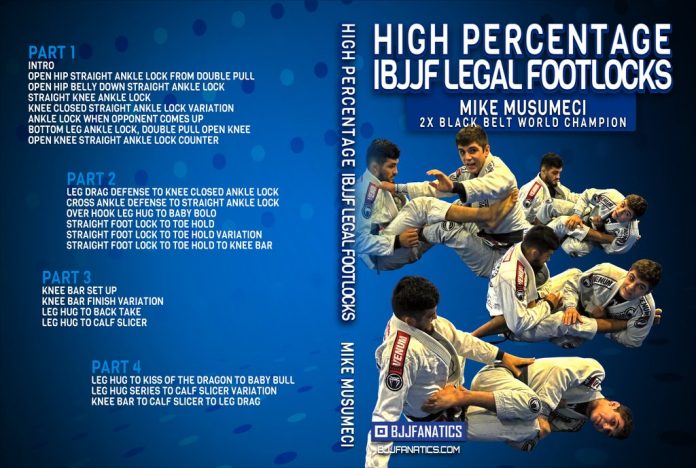 Brazilian Jiu-Jitsu instructionals on the subjects of leg locks are popping up left, right, and center these days. As BJJ attempts to catch up to other grappling martial arts like Sambo or Catch wrestling in the leg locking department, everyone seems to be recording instructionals. However, not everyone is actually fit to do so. there are even people that are blue belts and are coming out with BJJ leg locks videos, claiming they work. As far as proven resources, if you like leg locks, you can’t go wrong with Danaher’s or Craig Jones’ work. On the other hand, if you are an IBJJF competitor, you only have one legitimate option – the brand new Mikey Musumeci DVD named “High Percentage IBJJF Legal Footlocks”.

Mikey Musumeci is one of those grapplers that I’d let teach me everything. You know the old “if you want to really learn BJJ, learn from a small guy”. Well, they can hardly get smaller, or more technical, than Mikey Musumeci. Despite his size, his grappling game is on fire, as he has proven on multiple occasions against opponents of all sizes. Now, Musumeci offers his insight into the ultimate giant-killing moves that grappling martial arts have to offer – leg locks. However, he keeps things very precise, by focusing solely on those lower limb submissions that are legal under IBJJF rules. Despite this significantly shortening available arsenal, this Mikey Musumeci DVD has more than enough options to make you a Danaher Death Squad level leg locker in the IBJJF circuit.

As one of the smallest high-level grapplers of our time, Mikey Musumeci’s name usually comes in a pair. Very often he is connected to his sister, Tammi Musumeci who is also a high-profile grappler and black belt. Just recently, Mickey Musumeci delivered a DVD instructional on the subject of guard retention and back takes. Typical small guy stuff, right? Well, now he expands his giant-killing resources with a brand new Mikey Musumeci DVD.

Michael Musumeci is a Gilbert Burns and Jonas Gurgel black belt. He is one of the few grapplers that has a black belt from two outstanding professors. Musumeci, born in 1996 made a name for himself by becoming a champion in almost every level of the sport. His first competitive success came in the juvenile divisions, and he never looked back. He holds world titles at every belt level and is a 2-time black belt IBJJF world champion, on top of plenty of other titles.

Originally from New Jersey, the 22-year-old switched a few academies during his grappling reign. Now, he is a part of the Caio Terra Association, a real den for highly technical lighter-weight grapplers. he had a pretty public “bust-up” with Atos, where he trained before. He actually got his black belt at the age of 18, making him a real phenom in the world of BJJ. Now, after a very rich and still ongoing IBJJF career, he sheds light on a very “controversial” subject in BJJ. Leg locks under the IBJJF were never seen as a potent weapon, until recently, with a few exceptions. Now one of those exceptions has a brand new resource on the subject – the High Percentage IBJJF Legal Footlocks Mikey Musumeci DVD.

Mikey Musumeci is no stranger to using leg locks during tournaments of the highest caliber. Although people know him mostly due to his Berimbolo efforts, Musumeci is a very well-rounded grappler. You’d expect nothing else from someone who’s been competing under IBJJF rules since childhood. And that is exactly the person that you should turn to lift the veil of mystery of what’s legal under IBJJF rules. At least in the leg locks department.

To be honest, there’s actually not much left that we do not know about IBJJF rules on leg locks. What basically everybody can do is a straight footlock. In terms of submissions, kneebars and toe holds are the only other options available. However, they’re both locked until you reach the brown belt. Even then, the toehold is the only twisting submission you can get. The main trouble people with IBJJF rules are positions. The stuff that is actually illegal in certain leg configurations that allow you to attack leg locks in the first place.

This is exactly where this latest Mikey Musumeci DVD comes in. Through a decade of IBJJF experience, Musumeci found a way to make things work. First of all, you won’t get stuck in any of the “reaping” positions condemned by the IBJJF. Next, you’ll learn how to be extremely effective with all three main weapons from legal positions. Some of the positions are going to get you thinking because not even Danaher has them in his system. yet they work for Musumeci, so it means they’ll do great for you as well!

Who is this Musumeci DVD for? The answer is easy – almost everyone. Apart from kids and juvenile competitors, everyone else can use the information in the High Percentage IBJJF Legal Footlocks instructional. While competitors under the rank of the brown belt are somewhat limited, there are still a lot of options to build a very solid IBJJF friendly leg lock game.

The DVD contains 4 volumes, which is by now, somewhat of a mus for a serious BJJ video instructional. The production is top-notch, with no glitches in any technical department. Mikey Musumeci himself is an outstanding coach and teacher. The way he delivers information and has things organized progressively ensures everything is clear in every chapter. On the subject of chapters, this DVD is very Neil Melansonesque. Musumeci goes for quality over quantity in most of the volumes, offering an extreme amount of info organized in just a few chapters. According to me, this is the best way of delivering grappling information via video instructionals.

Of course, the “High Percentage IBJJF Legal Footlocks” Mikey Musumeci DVD starts with an introduction. By the way, it is just the introduction we needed – one covering leg lock rules instead of only techniques. Mikey also offers an insight into his system of highly effective positions for hunting leg locks. The perfect DVD for beginners and/or those just starting with leg locks.

The system Mikey has is extremely simple to grasp. He has three main positions for attacking ankle locks. The first is the open hip position, meaning you have no direct control over the opponent’s hip. This is where he demonstrates a great variation of the tripod ankle lock, as well as a bottom finishing option. Next, it the straight knee position, an innovative way of finishing ankle locks from an unusual position. The final option is the knee closed position, something more akin to the Ashi Garami we usually use. All are extremely efficient at delivering air-tight ankle locks on opponents of all skill levels.

Finally, there are a few additional useful options, like dealing with an opponent that comes up. There’s also a sneaky counter to ankle locks that you’ll surely find useful.

Chapter two is something blue and purple belts will find particularly useful. Especially purple belts. Here, Mikey Musumeci keeps exploring IBJJF legal ankle locks but also introduces his trademark baby bolo to the mix. And along with it, he gets into toe holds.

To holds are arguably the most efficient and potentially dangerous submission you can get under IBJJF rules. However, most people do not expect them from a Berimbolo. Or, better said, a baby bolo. First of all, this is the DVD where Musumeci first mentions the leg hug. As you’ll see further on, the leg hug is a great spot for launching all kinds of leg locking attacks. The leg hug leads to the baby bolo or directly into toe holds. On top of everything, there are crucial combinations of ankle locks and toe holds. All the ankle lock positions from the previous volume come back into play, along with the knee hug and toe holds. As you can see, Musumeci’s system gets progressively more complex, offering a lot of variety, all the while keeping things IBJJF legal.

The third volume of the  “High Percentage IBJJF Legal Footlocks” Mikey Musumeci DVD is the perfect BJJ instructional. It contains only four chapters, each covering a lot of in-depth facts about leg locks. In particular, this is the DVD where kneebars enter the frame. Here’s where things get into advanced territory.

Musumeci’s kneebar setup is certainly a unique one. It comes as no surprise, really, as smaller people need to find a way to leverage larger opponents a bit differently.  There’s a great setup to ensure you’ll get to the kneebar every time, and incredible details to ensure a tap. Finishing variations only provide additional submission options, even against stubborn opponents. Namely, Musumeci shows you how to transform the straight kneebar into a twisting submission.

The leg hug position is a big part of this DVD as well. It is the perfect avenue into leg locks. It also offers a great back-taking route, or the option to switch to the most brutal IBJJF legal leg lock – a calf slicer.

#4 The Leg Hug Series And More

The final chapter contains only three chapters. Do not panic, all three last an excess of 20 minutes, providing complete systems as opposed to just simple techniques. Unsurprisingly, the leg hug is the starting point once again. It’s a position you’ll soon learn to love, trust me. However, except advanced series in this final chapter of the “High Percentage IBJJF Legal Footlocks” Mikey Musumeci DVD.

The first chapter outlines how to get from the leg hug, via a kiss of the dragon, to “baby bull”. it is a flow, rather than a move, so it’s going to require some basic knowledge of BJJ movement patterns. There’s also a crazy effective calf slicer from the leg hug, which you can set up in a whole bunch of different ways. The final series is all about connecting the dots. What you get is a leg drag, that actually starts as a kneebar attack, which then goes in a calf slicer. Wicked stuff from the little grappling magician!