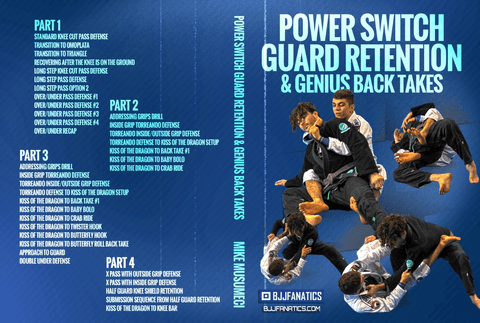 In the era of the flexible and complex Jiu-Jitsu guards, the smaller grapplers are the ones that get the chance to shine. Open guards in BJJ are now a work of art, with countless variations developing regularly. Guard retention is a big aspect of playing guard, especially when you’re the smaller person in a match or roll. If you see a featherweight black belt match today, you’ll most likely miss a lot if you even blink. The speed of the matches is at a whole new level, particularly in the lighter weight divisions. No wonder so many of the smaller built grapplers base their game on the guard so much. Michael Musumeci is one of the world’s top Jiu-Jitsu athletes and a multiple world champion at featherweight. he is also the author of a crazy good instructional on the subject of guard work. Time to check out the “Power Switch Guard Retention & Genius Back Takes” Mikey Musumeci DVD.

The primary goal of the guard position in Jiu-Jitsu is safety. The theory of guard is to arrive at a position that’ll keep you safe while opening up offensive options for you. The trouble with this approach is that BJJ is not a stagnant martial art. For every new guard variation that emerges, eventually so does an effective pass. This just leads to the further evolution of guards and the cycle keeps repeating. Today’s modern guard game has taken guard retention to a whole new level. This modern game works particularly well for smaller grapplers since the size is a real advantage here. It is much easier for a featherweight to get on their opponent’s back by means of elaborate rolls and inversions from open guard positions. This is precisely what you’ll learn in the “Power Switch Guard Retention & Genius Back Takes” Mikey Musumeci DVD.

If there’s one guy you’d like to learn the secrets of the guard from it is Mikey Musumeci. he has a legendary status in the BJJ community. The 22-year-old black belt world champion (twice) seems like he hasn’t even started to reach his full potential. He is actually the first American to get a world title at a black belt twice. Mikey’s game is a lot like the game of other small-framed competitors of today like Caio Terra and the Miyao brothers. However, each of them has their own take on working form the open guard, and nobody has dedicated more time and effort than Mikey Musumeci.

A couple of words on the impressive grappling background of Mikey Musumeci before we go on. The featherweight has won all there is to win in all blet divisions on his journey to the top. Starting at the juvenile blue belt level, his competitive record boasts world titles all the way to adult brown and black belt. 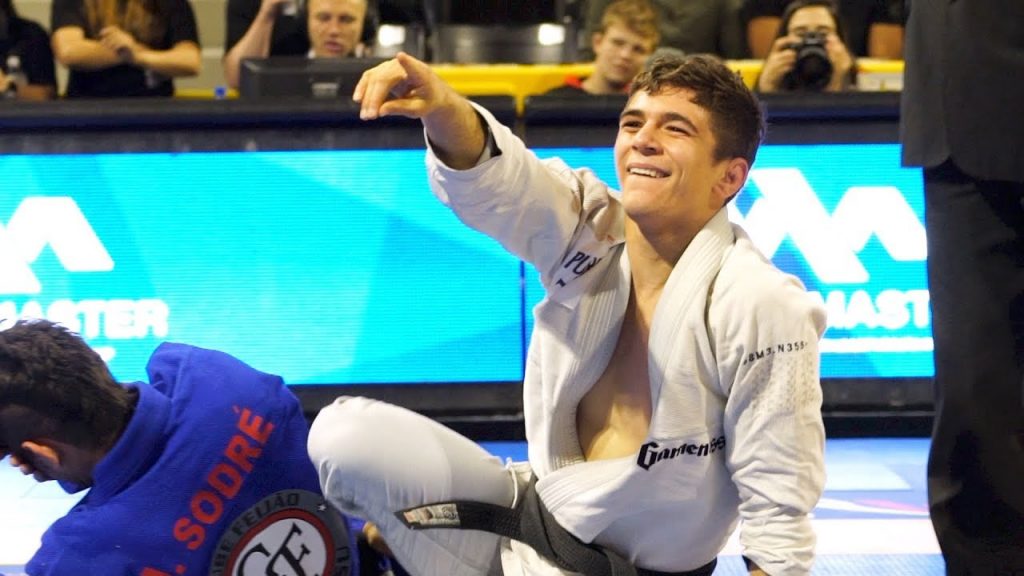 The most impressive thing about Mikey is that he has accomplished everything at such a young age. from 2012 onwards, he has a world title to his name, in either the IBJJF or UAJJF or both, at different belt levels. Currently, he is a part of the Caio Terra Association where he sharpens his skills with some of the best lighter weight grapplers in the world. Apparently, and luckily for us, he is now also issuing video instructionals on his favorite moves. You could hardly be a smaller grappler that doesn’t own such a gem of an instructional as this Mikey Musumeci DVD.

Mikey started training at the age of 4, under Fernando Cabeça. After changing a few more academies across the USA, Mikey ended up in a Mendes brothers seminar. He started training with them at every occasion possible, quickly adapting to their sophisticated guard game. As his family moved again and again, Mikey switched a lot of academies before earning his black belt from both Jonatas Gurgel and Gilbert Burns at the age of just 18.

Technically speaking, Mikey’s favorite moves are Berimbolos and all other associated inverted back takes from open guards. Considering all the time he spent with the Mendes brothers, this is hardly surprising. He is a huge fan of inverting, as a means of ensuring guard retention and opening up pathways to the back.

The “Power Switch Guard Retention & Genius Back Takes” Mikey Musumeci DVD is a 4 part instructional, lasting in excess of four hours. Throughout the DVD’s there are some common themes that Mikey goes over on multiple occasions. With that in mind, this review is not going to follow the disc-by-disc model but focuses on the technical aspects of this instructional instead. We’re going to go topic by topic, looking at all the moves that made Musumeci such a dominant world champion.

In terms of guard positions, this Mikey Musumeci DVD focuses on the Reverse De La Riva, De La Riva, and Knee Shield Half Guards. Completely understandable as Mikey is a big fan of inverting and spinning underneath to take the back. That said, the Reverse De La Riva is definitely his top pick. A unique aspect of his game is also the crab ride position. Mikey uses this old wrestling mainstay as a very effective guard position on its own. Musumeci can keep his opponent tangled in a crab ride until he sees fit o take the back and finish. Now, you can learn how to do it too!

In terms of guard retention, the “Power Switch Guard Retention & Genius Back Takes” Mikey Musumeci DVD covers all passes that might get you in trouble. The first thing that Mikey dissects is the knee cut pass and how you should defend it. This common pass causes a lot of problems for guard players, especially smaller ones. Mikey dedicates a lot of time and attention, particularly in the first DVD on how to prevent it.

Next up, he covers the best ways to deal with the long step and over-under passes. This is where Mikey spends quite a lot of time, offering multiple options. He has them ordered by number instead of coming up with new elaborate names. This makes remembering them that much easier.

The Torreando is up next and Musumeci goes into counters as well as retention concepts. The best thing about the Ttorreando defenses is the grip fighting. Mikey really dumbs down how to successfully negate your opponent’s grips. Not only that, but he demonstrates how to get your own grips so you can mount counter-attacks.

Finally, he goes over a couple of X pass defense strategies. Once again, grip fighting plays a huge role in the effectiveness of your guard game.

Kiss Of The Dragon

The kiss of the dragon is Mikey’s favorite way of getting to the back. In short, it involves you spinning between and under the opponent’s legs. This is done by inverting and is a great and easy way to end up in the crab-ride, and ultimately, back control. Musumeci is an expert at using this and doesn’t spare any details explaining it.

Apart from these recurring concepts, he also shares some really innovative moves. For example, he uses the kiss of the dragon to set up a twister hook and ultimately get the back. He likes to transition into butterfly hooks a lot, offering another dimension of attacks.

Of course, submissions are in no way underrepresented in this instructional. To begin with, Musumeci uses certain moves, like triangles and the Omoplata as direct counters to some passes. As his game gets more complicated, he likes to use the kiss of the dragon to set up finishes. One great example that you’ll see is a very sneaky kneebar setup from there. It became an instant favorite of mine right away!

Mikey also has one hell of a sequence of submission attacks from the half guard. In particular, he likes to use the knee shield to open up multiple threats on his opponent. The result of following this sequence is a 100% certain submission. The best part about it is that you’ll be completely safe in your guard while you’re attacking!