Let’s pay attention to the one choke, I think is crucial for any BJJ student to know. The guillotine is a classic Brazilian Jiu-Jitsu move, one that has a high percentage success rate. That said, there are also a bunch of variations to the guillotine, along with different positions to get it from. All this means that it is becoming difficult for students to know what works best, and which variety fits better under the given circumstances. The solution is pretty easy, as there’s one variation out there that easily tops all others. It is not hard to learn, it is applicable at all levels, and works with the Gi as well as without it. It is the Marcelotine, the signature submission of legendary Marcelo Garcia.

Marcelo Garcia is a very unique character. As a grappler, he is undoubtedly one of the best that ever graced the mats. As a teacher, he might even be better than he was a competitor. However, it is his take on certain BJJ techniques that makes him such a polarizing figure in the world of Jiu-Jitsu. Namely, Marcelo is quite notorious for claiming he simply doesn’t believe in certain techniques. For example, he doesn’t think that leg locks, Brabo chokes or Kimuras (to name a few) works in grappling. Despite a lot of evidence to the contrary, he decides to ignore there are moves in favor of focusing on others. His toolbox is by no means small and has a lot of sharp techniques in it. The Marcelotine is just one great example of that.

The Marcelotine is essentially a guillotine, done without the opponent’s arm. WHiel Marcelo also likes the arm-in guillotine, his take on the original move is groundbreaking. Just go back and watch his ADCC matches and you’ll see exactly what I’m talking about. The Marcelotine is the tightest guillotine variation I’ve ever felt, or done for that matter. IT works without using any strength, is available from almost everywhere and escaping it is virtually impossible. interested? 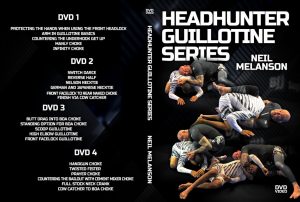 The modern version of Marcelo Garcia, at least in terms of innovation and technique effectiveness is Neil Melanson. The scary looking catch-wrestling machine is a big fan of attacking with guillotines. So much so, that has a complete instructional on it. “The Headhunter Guillotine Series” DVD set focuses on guillotines from everywhere. He also has a unique take on the Marcelotine, if you’d like to expand your choking knowledge!

The Moves That Work According To Marcelo Garcia

We named a few of the moves that Marcelo thinks are not really effective for BJJ. So, what are the moves that work? Well, if you look at Marcelo’s game, you’ll definitely notice a pattern. His clear favorites are the X guard, the single leg X, the Guillotine/Marcelotine, the rear naked choke, and the crucifix position. Not a bad bunch of moves, right?

There are a few common threads among all these positions. Marcelo obviously doesn’t like to rely on strength when he’s grappling. Actually, one reason he dislikes the Kimura is that it is a “strong man move”. While many might disagree, it does take a certain to-and-forth when you’re battling for a Kimura. Marcelo likes to be brutally efficient with as little effort as possible. Plus, he likes the high percentage stuff.

Both X guard variations, for example, allows him to be underneath his opponent and in between the legs. This means that he doesn’t have to bear any weight and can sweep with ease. Plus, they open up a path to his other favorite positions like back control. In an attacking sense, he likes positions that keep him out of the reach of his opponent and maximize control at the same time. With the crucifix and back control, he is constantly behind the opponent. With the Marcelotine, he is also behind the head, having a very high degree of control over the neck.

The Marcelotine Vs The Guillotine

The difference between the Marcelotine and all other guillotines is the grip. Actually, it is the placement of the arms after the grip. Consequently, the choking mechanic is also slightly different. The last aspect is the amount of control you have over your opponent.

For a Marcelotine, Garcia usually chooses the butterfly guard as his starting position. Marcelo likes to use head and arm control in order to get into position. He likes to pull himself up, trapping the head with a chin strap grip. So far, there’s nothing, unlike your usual guillotine setup. Once he has the chin strap, he goes for a ball in socket grip. This allows the bony part of his wrist, below the thumb, to apply immense pressure on the neck later on.

Which brings us to the fun part. Once everything is in place, it is time for the special finish. A regular guillotine would have you keep both your elbows back and crunch to the side. The Marcelotine, on the contrary, requires your”socket” arm (the one not around the neck) to go in a specific position. Once you have the grip in tightly, the goal is to get the elbow of the free arm and prop it up against the opponent’s shoulder. The closer you can get your elbow to their head the better. This will give you both the option to control with ease, and finish without any strength needed. The specific position of the elbow is why this move is also known as a high elbow guillotine.

The real value of the Marcelotine is not just in it’s choking prowess. Of course, that, paired with the crazy amount of control is a huge benefit. But what also makes this move perfect is the fact that it works just as well with the GI. Keeping your arm on the outside means you won’t get entangled in the Gi like with the arm-in guillotine. Also, the position of your elbow means your opponent can’t tug on your Gi to relieve the pressure. The perfect choke for any occasion.

As already covered, the Marcelotine is perfect for a bottom attack. Butterfly guard closed guard, half guard and a plethora of others all offer Marcelotine entries. Furthermore, even dealing with repeated passing attempts can be alleviated by getting the grips in.

Transitioning is also very easy with a Marcelotine in place. If you want the top position, or something is not quite there for a finish, you can always sweep. the control you have over the head as a result of the frame with your arms means all you need is to tilt and you’ll end up on top.  And, the best thing is, that you’ll still have a fully locked choke to go for.

The Marcelotine is actually really easy to get and finish from the top as well. You can get it whenever an opponent sits in guard in front of you. You can also hunt for it from top half guard side control or mount. OF course, there’s the turtle and getting to the choke via the front headlock. You could start looking for it even while you’re on your feet.

The Story of Marcelo Garcia

Is The Ashi Garami BJJ Guard Something Worth Exploring?