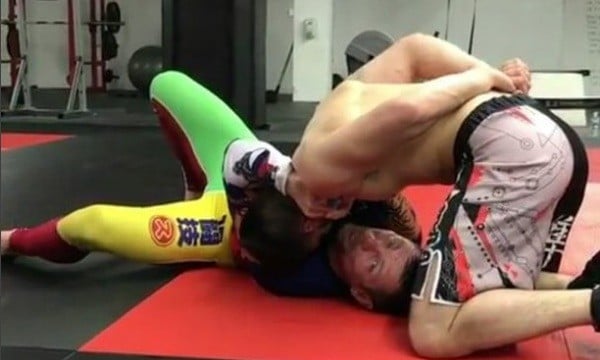 Don’t you just love it when people come up with creative ways to modify BJJ techniques? Especially when it is a move that everyone thought specific to Gi Jiu-Jitsu. There are a few examples of moves like this out there, but none is more legit than the baseball bat choke. When this brutal Gi choke made the jump to No-Gi people got really excited! However, something didn’t see to click for many, I included. There’s something very unnatural about the way you place your arms for the No-Gi baseball choke. It turns out the solutions is really easy, you just need to know where to look. Oh, and it works from both the bottom and top positions, just like its Gi counterpart!

Baseball Choke is So Powerful

One of the fastest-acting chokes in all grappling martial arts is the baseball bat choke. This lapel choke has probably put more people to sleep than any other BJJ choke. Well, apart from the Rear Naked Choke, perhaps. The beauty of the choke lies in its simplicity and its speed. getting the baseball bat choke up is not difficult, making it perfect for students of all levels. It also has the power to put people to sleep in an instant, especially from the bottom position. The only trouble with it was that you can’t do it in No-Gi. Well, you can. The No-Gi baseball choke is a legitimate and truly effective technique, not unlike the Gi version.

The way that I first learned about the baseball choke was as a counter to guard passes. I don’t even remember who showed it to me first, but it worked on everyone! At one point I’d just let people pass, in order to get the strangle. And, there was a good number of folks that ended in dreamland because of it. That’s how fast it works. the trouble was, I started over-relying on it, making my guard game in No-Gi worse than horrible. So, I made the mistake of abandoning the choke all together in favor of more “universal” techniques. A few years down the road, the No-Gi baseball choke became a thing, renewing my interest in an old submission. 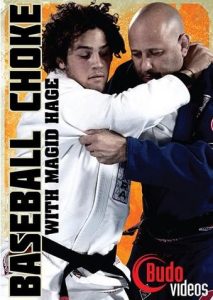 The creator of the baseball choke, Magid Hage has a very detailed DVD instructional on the subject. His talk of the baseball bat choke is with the Gi, but the details demonstrated in the “Baseball Choke” DVD set are nothing short of astonishing!

The baseball bat choke is an old choke, most likely with Judo origins. It works by allowing you to jam both forearms into the opponent’s neck. In an ideal scenario, it works by hitting both carotid arteries at once, leaving very little time for a tap. The reason you can do this is that you’re not squeezing, but using your whole body weight to tighten the choke. And this is all possible because of the grip you have on their lapel.

For the Gi baseball choke, you want one arm with four fingers in and the thumb out. it should go deep into the opponent’s collar on the far side of their neck. The other arm goes on the opposite side, with the thumb in. Ideally, both palms should touch at the back of the opponent’s head. This method of positioning the arms allows your elbows to go past each other, completely taking away all the space between them. Since the neck is trapped, the choke works instantly with brutal consequences.

You can see why people had difficulties with the No-Gi baseball choke at first. replicating the Gi grip in an effective manner seemed impossible for most. Along came a grappler by the name of Scott Sievewright. Scott found a way to modify the grip sot at it allows you the same tightness and range of motion in No-Gi.  First of all, forget about using palm-to-palm, finger-in, butterfly and other grips. All you need is an S-Grip and a shallow one at that. The trick is sneaking your choking arm under the palm of the other arm. From there, the key detail is the spin. This creates the angle you need to get your elbows past each other.

With the Gi, the baseball choke works form bot the top and bottom positions. From the top, the knee slice position is the usual setting point. ti allows you to pass directly into a submission, and gets you to north-south, meaning even if you miss, you still have a great position and points for the pass. From the bottom. people usually get it from the half guard/ze-guard/knee shield. However, in order to make it work, you have to allow your opponent to pass to side control.

The No-Gi baseball choke is actually really easy to get from top Side Control. All you need is to make sure you get the grip, without your opponent knowing. If you enter a grip fighting battle, they’ll probably do all they can to stop you from getting it. So be sneaky about it. Since you already have an arm under their head, you’re not too far from the ideal grip. Use your other hand to establish the grip and immediately put your forearm over their neck. Aim to put both elbows as close as possible.

The finish is actually much easier and works right there from the spot. There’s no need to go to north-south like with the Gi version. Once you have the forearm across, you’ll need to switch your hips to increase pressure and stabilize your position. For this, your hips need to be in a Kesa Gatame-like position, facing the opponent’s head. The tap (or nap) will come when you lie back, pulling their head towards their chest.

Baseball Chokes From The Bottom

The bottom setup is actually not much unlike the Gi one. Starting from teh knee shield half guard, the first step is getting the grip. When you put the grips on, your opponent is not going to do much about it in most cases. There are not many people that’ll expect you to use an efficient choke from this position. Once you get the grip, do not be too obvious when letting your opponent pass the guard.

Once they’re past your legs though, you need to make sure yo do two things. The first is to crunch up, so your head goes as close to theirs as possible. This will prevent them from using a forearm frame to create space. Next up is the turn. Make sure you turn away from your opponent in order to exert maximal pressure on the neck. In the rare case that they skip over in a desperate attempt to survive, simply follow them and finish with the No-Gi baseball choke from the top.