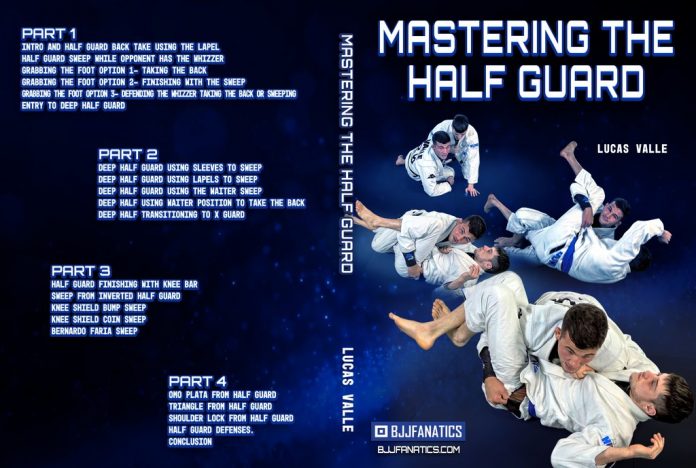 The question is not whether or not you play half guard in BJJ. The question is what kind of half guard you’re playing and how effective you are with it. Most people have the habit of choosing a half guard variation and sticking with it. This is a perfect strategy, particularly for competitors. However, people that manage to develop several different types of half guard that all tie in together, are pretty much unstoppable from the bottom. There are not many of those around, and becoming one is a great way of establishing yourself in the BJJ world. This Lucas Valle DVD Review is not just another half guard DVD review. But, then again, this is not just another half guard DVD instructional either.

ON SALE HERE:
Lucas Valle – Mastering The Half Guard (DVD/DIGITAL)

There’s not a person alive in Brazilan Jiu-Jitsu that doesn’t like the half guard. It is the ultimate backup position for everyone and the go-to spot for plenty of world champions. Whether it is half guard founder Gordo, Bernardo Faria and his deep half or Tom DeBlass’ butterfly half guard, the position works! Moreover, the half guard is pretty much a hybrid of open and closed guards, making it a truly unique position. Lucas Valle is one of the up and coming black belts that have a different take on the half guard than most others. His “Mastering The Half Guard” instructional is something different and we have the most comprehensive Lucas Valle DVD review right here!

Deep Into The Half Guard With Lucas Valle

Lucas Valle might not be a name that immediately makes you think of the half guard. In fact, plenty of people in the BJJ community might not know him yet. That’s perfectly okay, as he is a new black belt that is on a meteoric rise. As this Lucas Valle DVD review will show you, he is a real virtuoso when it comes to the half guard. Moreover, he has the rare ability to play different half guard types with the same efficiency. that makes him an extremely dangerous grappler from the bottom.

Lucas Valle is a grappler who grew up looking at Rickson Gracie fight tapes with his dad. No wonder that at 15 he got into the Gentle Art himself and never looked back. During the process, he discovered the power of the half guard. It is not something that is unknown to us, as it is one of the first “safety” positions people discover in grappling. However, Valle took it much further. He did what only a few other grapplers have ever succeeded at doing. – connect different half guard variations into a complete game.

The Lucas Valle half guard system is actually a very logical one. It consists of all the best half guard variations that are proven to work at the highest level. The real mastery is in the way that he connects them into a working gameplan. Another huge aspect to it is that all positions are low risk and high reward – just the way we like them. Moreover, you need absolutely no exceptional physical qualities to play the Lucas Vell half guard system. All you need is to pick “Mastering The Half Guard” up and follow the instructional. That’s it.

Finally, down to the Lucas Valle DVD review itself. This Brazilian Jiu-Jitsu DVD instructional is a highly specialized one. In terms of the type of instructional, it is a technical instructional for the most part, although there are some key concepts inside as well. The DVD set has four volumes and there’s a pristine organization to each. Technically speaking the video production is sublime, with a clear view and perfect angles that show the essentials of every move. Sound is also flawless,  with Valle speaking a clear and understandable English in a very easy-to-follow style. Each volume has about half a dozen chapters, each explained in a long, comprehensive and detailed manner.

The very first volume starts off with some basic half guard work. The instructional is with the gi so you get a lot of lapel options thrown in there. Most of the chapters focus on gripping and some basic sweeps. Volume number two is all about the deep half guard, and every crazy option you have from there. In volume three, Valle shifts focus towards the knee shield, offering some groundbreaking innovative stuff. Finally, a round of submission finishes and defenses round off the perfect half guard DVD instructional.

#1 Half Guard Back Attacks

From the very first time I watched this instructional in order to do Lucas Valle DVD review, I knew ti was different. First of all, the action starts from the very first second. Lucas doesn’t spend time talking about him or what he has accomplished in Jiu-Jitsu. Since everyone pretty much knows what the half guard is, he doesn’t go into that either. Instead, he begins in the half guard and gets down and dirty right off the get-go.

The first order of business is taking the back. However, instead of arm dragging, as most people do, Lucas likes to go for lapel setups. The very first chapter of this DVD contains one of the most effective half guard moves I’ve ever seen. Next up, there’s a section on foot grabs and how they lead to sweeps or back takes. The best part about this mini system is that it works perfectly in both gi and No-Gi. Another huge thing covered in this volume is how to deal with the Whizzer. Once again, both sweeps and back takes are available, from both lapel and foto grab setups.

The deep half guard position of the ‘mastering the Half Guard” Lucas Vella DVD actually starts in volume 1.the final chapter of the previous volume talks about entering into the deep half. In volume two, the action takes off from the same spot, going into some versatile and unexpected deep half guard attacks.

What you’re going to get from this deep half DVD are three things. first up, you get some crazy-effective sweep options. From sleeve grip sweeps, through lapel sweeps all the way to the mandatory waiter sweep, there’s everything in here. A second thing that Lucas demonstrates is how to transition to the back position. Instead of trying to hit back takes off the deep half he instead sets his up from the waiter sweep. That way, if the sweep fails, you always have the back take to fall back to.

The final thing that this DVD demonstrates is how to use the deep half to transition into a highly offensive guard game. The guard of choice is the X guard, which is one of the most attack-minded open guards out there.

The knee shield is the most common half guard position people use. It is also the position most people do wrong because of the lack of understanding of it. Well, as this Lucas Valle DVD review taught me, “Mastering The Half Guard” has a solution for this issue. The knee shield can work even against the best in the world if you know how to set it up. For example, there’s’ such an effective and unstoppable knee bar setup in this volume that it is going to make your head spin. Moreover, it opens up a whole host of other opportunities.

Lucas demonstrates a total of three sweeps form the knee shield position. Those are the bump sweep, coin sweep, and Bernardo Faria sweep. All of the work in a different direction and tie in perfectly with one another. Once you start going, you’re bound to get at least one of the working. Lucas spends a lot of time going over each sweep, that’s one reason why there are only three sweep options from the position. A second reason is that he likes to keep things simple and effective, removing everything that’s excess.

The one thing that stands out from the knee shield is one chapter on the inverted half guard. It is pretty much a Tornado guard variation, one that’s easier and ends up in a very high-percentage sweep.

The final portion is the real cherry on the cake in this DVD instructional. Here, Lucas offers his favorite high-percentage submission moves that can finish a fight in the blink of an eye. Once again, there are about half a dozen chapters in here, each focusing on a different submission option. The submissions include chokes and armlocks, which, if you factor in the kneebar from the previous volume, mean you have options of just about everything.

The submission bonanza starts with a half guard Omoplata that is a real game changer. In fact, there’s an additional shoulder lock option that ties in perfectly with the Omoplta. In terms of chokes, Lucas keeps things simple. he shows a 100% successful triangle choke. Once you spend enough time drilling this one, you’ll pretty much hit it all the time. It is that good. Wrapping things up is a portion on defenses from the half guard that’ll ensure you stay as safe as possible in any of the variation Valel show in this instructional. With that chapter, we conclude our Lucas Valle DVD review.

All in all Lucas Valle’s ‘mastering the Half guard” BJJ DVD instructional is a real breath of fresh air. It gives a different perspective to the half guard, one which many grapplers miss out on. In fact, most other instructionals seem to forget about it as well. Valle’s DVD teaches you how to connect together the most effective half guard variations in existence. Plus, it dedicates a lot of time to each and every one of them, offering groundbreaking sweeps and submissions! This Lucas Valle DVD review was one I particularly enjoyed doing.

ON SALE HERE:
Lucas Valle – Mastering The Half Guard (DVD/DIGITAL)