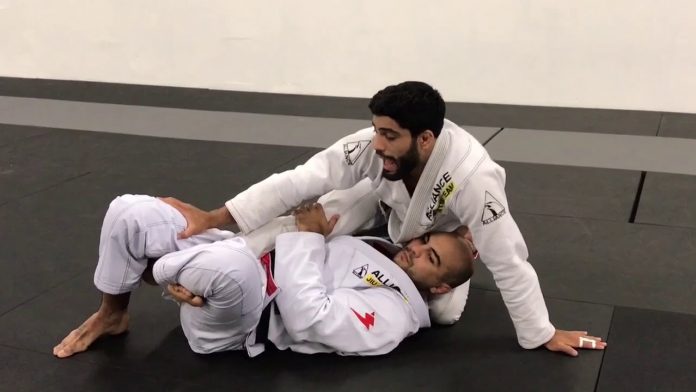 Deep Half Guard is one of BJJ’s most effective positions in every format of the sport. For starters, the half guard is very effective for controlling, sweeping or directly submitting anyone and it has been proven to work at every belt level, Gi or No-Gi. Once you get the good knowledge of the Half Guard it’s time for you to move to Deep Half Guard and find how effective it really is.

First of all! If you’re looking for the best possible deep half guard DVD instructional there is a great one from Bernardo Faria. It’s Called Faria Guard. He’s probably the only deep half guard player in the world that won simply everything with it. 5 times world champion etc… So, if you’re interested in Bernardo Faria’s DVD you can check it HERE

Furthermore, there are numerous variations to the position which ensures a dynamic transitional game. From the regular half guard, you can easily go into a knee shield, undertook half guard, lockdown or a number of others. One of the most technical and dangerous half guard variations, though, is the deep half guard.

The deep half guard is considered an advanced position in Jiu-Jitsu and for a good reason. When mastered, it can be used to easily deal with stronger, bigger and/or more experienced opponents. It is a position of high security that offers good control and plentiful attacking options. And, even if, for some reason, you decide to bail on it you have a myriad of transitions at your disposal. No wonder the deep half guard is the go-to position for many of the highest level grapplers!

Not unlike the 50/50 guard, the half guard was known as a stalling or a safety position until recently. As Brazilian Jiu-Jitsu evolved so did the position, claiming it’s placed in the hierarchy. Today, the deep half guard is one of the most technical and advanced guards available.

In the evolution of the BJJ half guard, the deep half guard emerged.  This version of the half guard is one of the most high-percentage and offensive guards you can play. Sweeps are extremely high percentage from the deep half guard, and you can even look for certain submissions. There are also a bunch of reliable entries from half guard variations as well as from other bottom positions. It is even attainable from “bad” positions where you’re focused only on defense

When building a strong deep half guard game, you must first understand the fundamental principles of the position. In true Jiu-Jitsu fashion, the in the position is on isolating one part of the opponent’s body. In grappling martial arts, any effective movement boils down to how many limbs your opponent hs to work with. If they have two or more limbs in play it is far more difficult to really affect them.  Deep half is essentially a method of isolation of one leg, followed by transitions into sweeps and/or back takes.

Regardless of level, the basic concepts must be mastered for an effective game. More experienced grapplers need the basics in order to mount attacks, while the inexperienced ones will never keep the position without strong fundamentals. Remember to control the full length of the leg lever, from the hip all the way to the ankle. Along the way, place a strong emphasis on knee control, as it prevents any turning of the leg.

Getting To The Deep Half Guard

A great thing about the deep half is that you can enter even from a completely defensive position (like when the opponent has your back). Effectively, the deep half guard can allow you to quickly turn the tables on any opponent, going from a very bad to a very good position.

As a basic rule, always look to perform a technique by doing the right steps, as opposed to waiting for a mistake. Acquiring some of the other guard positions in Jiu-Jitsu most often requires a certain error by your opponent. It might be a sleeve grip that you obtain, a De La Riva hook or no space in a closed guard situation.  Deep half guard, on the other hand, relies less on the opponent making an error.

When you enter deep half one of your arms is always at risk. Remember that all the sweeps in the world will are highly unlikely to get you out of a tight Kimura.  Watch out for sneaky chokes involving lapels and collars as well.  Deep half can be a vulnerable place if you do not understand it. However, it is by far one of the best places from which one can hit sweeps and back takes.

The entry can be 90% of the battle with the deep half guard in BJJ. Instead of relying on strength, count on a particular action from your partner. The “combat base” position, one of the most common in both gi and no-gi BJJ is the position of choice for the deep half.

In more opportunistic fashion, having someone on your back with hooks in can also lead to a deep half guard for you. With this easy entry, you’ll quickly turn the tables, not just escaping but sweep to the top position as well.

If you play this position then you really have to watch out for two main submissions. First, your opponent is going to try to step over your head and get a kneebar on your bottom leg. Secondly, your arm is in danger of being a Kimura if you’re not careful.

The best way to defend is with correct leg and arm position. Triangling your legs with your top one going over the bottom is going to cancel out any kneebar attempt. In terms of Kimura protection, look to hide your bottom arm behind the opponent’s knee. This provides both a great grip and a safe position at the same time.

Also important for defending against these attacks is positional awareness. In order to develop it,  grab a partner, and try to attack them while they play deep half guard. Understanding how attacks work is the best way to figuring out defenses and counters.

A Sweeping Game From Deep Under

From the deep half, always try to keep your body turned onto its side.  From there, you can control either your opponent’s hip or their thigh via your top arm. The legs can do a variety of things, triangle, butterfly hooking underneath and more.

The “hook sweep” from deep half guard is one of the easiest moves people have success with. The hook sweep is likely to be the sweep you use first, too. It’s really easy and becomes second nature once your feet and hands are in the right position. Rocking your opponent forward to get their weight to shift backward also works great. As soon as this is in place, the hook sweep is as good as done.

The “waiter sweep” is the most famous and utilized sweep from the deep half. Whenever your partner puts their foot on the ground, it’s right there. The move is really hard to defend, especially if you’re properly hiding your arm. This sweep works in competition at all levels, from white to black belt, Gi, and No-Gi. The evidence is out there!

Lapel sweeps are another really cool option you have from the deep half guard when rolling with the Gi. One, or both, of the lapels, can give you increased control over your opponent’s body, as well as an improved sweeping lever.

Top Concepts For Passing Even The Toughest Half Guard