If you’re looking to get an edge over anyone, Gi or No-Gi than there’s hardly anyone better than Neil Melanson. The crazy grappling coach has one of the most efficient and brutal grappling styles in existence today! he likes to stay in No-g, so all of his instructionals are without a kimono. However, they do work perfectly in any circumstance, Gi, No-Gi or MMA. Plus, he is relentless when it comes to releasing everything he has put together over the years in digital/DVD format. Every time a Neil Melanson DVD review is up, I can’t wait to get through the material. This one, though, was a real surprise, even for a hardcore Melanson fan like me.

Neil Melanson is a former Air Marshall that has one of the richest grappling backgrounds in the sport today. In respect of his Marshalling days and his grappling prowess he has the nickname the “Ground Marshall”. Since he has used the same name for several of his positions (guard and half guard, for example), his complete style can freely be dubbed the “Ground Marshal Grappling Style”.  But what is it exactly?

Well, Melanson is the only man to have managed to create the perfect hybrid of literally all grappling martial arts. He has a black belt in Judo by Gene LeBell, a black belt in Sambo by Gokor Chivichyan and  BJJ black belt from Karo Parysian. Oh, and he has a catch wrestling background prior to getting all his other grappling accolades. you can see how the man has an understanding of grappling that nobody alive can challenge.

Just like his rich background, Niel’s grappling system is the perfect hybrid of many arts. in it, you’ll find the brutality and straightforwardness of catch wrestling combined with the unique traditions and attacks from Sambo. Moreover, there’s a lot of old-school Judo stuff thrown in there, along with the latest and most effective Brazilian Jiu-Jitsu concepts.  Basically, Neil has a system that covers everything. His bread and butter move is the Triangle choke, which is a reason why he likes to play the bottom game so much. To that extent, the Snap Guard which is the subject of today’s Neil Melanson DVD review is his latest, and most effective bottom concept so far!

What makes this Neil Melanson DVD so special Well if you do not have any of his other instructionals, or have never read a Neil Melanson DVD review before, let us enlighten you. First and foremost, Neil is an unbelievable teacher. Not all black belts have the gift of being awesome instructors. Neil has no trouble with that whatsoever. in fact, he may just be the most meticulous grappling coach alive today. Whenever he does a grappling instructional he goes all in. He explains things down to the tiniest detail. What sets him apart from others is that he also covers variations of the move and possible alternative directions at the same time.

The combination of Melanson’s grappling style and his teaching methodology also gives his DVDs a specific outline. You won’t find chapters upon chapters in each volume of his work. Instead, you get 4-5 chapters per DVD. However, each one is 15-20 minutes long, and often even more. That means that within every chapter Neil covers a mini system of sorts, rather than just moves and techniques.

“The Snap Guard” DVD has four volumes, each organized in Neil’s specific style. The guard itself is an incredibly attacking one. there’s no stalling or time-wasting here. There’s also a whole host of “illegal” techniques in the form of spinal locks and devastating leg locks. It starts with an introduction in volume 1, followed by some of Neil’s crazy inventions in volumes 2 and 3. Finally, volume 4 goes over some of the nastiest wrestling moves you can use to make the life of BJJ guys and girls a real hell.

Similarly to any other Neil Melanson DVD review, we start things off with a chapter that says “introduction”. However, in the sense of a Melanson DVD, this is a lot different compared to other instructionals. here, he starts off with the idea behind the Snap Guard. What exactly is the snap guard? Well, it is a butterfly guard variation based on the wrestling snap down. As expected, it is the perfect hybrid of the most effective moves from different grappling martial arts.

Speaking of wrestling essentials, the first concept after explaining how the guard works is the Russian tie. This is one of the most effective wrestling moves in existence, one that still to this day works like a charm. Here. Neil uses it from the butterfly guard to take the back, as opposed to the traditional takedown set up. The Ground Marshall Kimura also makes an appearance, as a fallback option. An unstoppable arm-triangle setup from the bottom completes the first experience with the Snap Guard.

Volume two just builds on the crazy grappling foundations set by Neil in the first part of this instructional. Arm drags take the place of the Russian tie, with Melanson clearly set to use the best wrestling moves to add to the efficacy of BJJ and catch wrestling submissions. Melanson takes the arm drag to new heights by including the butt drag movement. AS far as the most powerful arm drag goes, this is it and it has a brutal tuck choke at the end of it. Just for good measure.

Speaking of chokes, this is the volume where Melanson opens up the snap guard submission finishes flood gates. An outside duck, another wrestling staple, opens up a crazy crucifix triangle choke setup that nobody has thought of before. The Neil Knot, that we already know also makes an appearance, along with some brand new modifications. In the end, Neil goes over a pullback triangle setup that’s as surprising as it is effective.

Well, you’ve found them. Before doing the Neil Melanson DVD review of “The Snap Guard” instructional I expected a lot of submissions. however, this particular instructional took even me by surprise. It is not just the sheer number of finishing options but also the incredibly high-percentage of success of all of them. A great example is the Shultz, a new take on an old choke that’ll revolutionize your front headlock game.

And yet, the Shultz is only the beginning. Brand new and completely nuts submissions, like the Butcher shop and the Sankaku spine lock, make their first-ever public appearance right here. And I’m in love with them at first sight! A couple of Whizzer counters also feature in this volume. In fact, they make up about half of this particular DVD. Given the butterfly type nature of the guard, they’re absolutely essential. And, in real Melanson style, they lead right into brutal finishes, an arm crank and a triangle being a couple of examples.

In the final portion of this DVD, Neil certainly goes back to his catch wrestling roots. he introduces some moves that people have been avoiding in BJJ or MMA for one reason or another. That said, they do work perfectly and with a few simple modifications actually, open up a whole host of possibilities.

First up is the underhook, although from a different perspective. Neil likes to set it up unusually deep, providing an exceptional pinning option. What comes after that is down to you, or one of the few brutal options Melanson provides. The one move that particularly caught my eye during this Neil Melanson DVD review is the cement mixer. I’ve always loved using it against a turtled opponent from the front headlock. Well, Neil gives it a whole new different dimension, as well as options I’ve never thought of before.

A couple of Neil Melanson signature triangle setups bring “The Snap Guard” DVD instructional to a close. Those are the college roll -side triangle and the footswitch Sankaku.

“The Snap Guard” Neil Melanson DVD is a real barn burner of an instructional. To be honest, all of his work is the same. However, there’s something special about this one. It is as simple as grappling can get, yet crazy effective. The moves in this instructional work, and not just some of them! They’re all high percentage and easy for grapplers of all levels to understand. Whether you roll Gi or No-Gi, get this instructional, because, at a certain point, you’ll need what it has to offer. 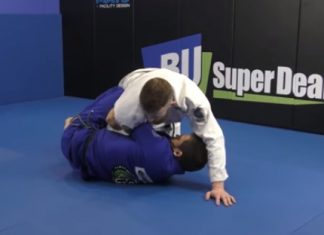 0
Fighting off the back is Brazilian Jiu-Jitsu's one characteristic trait that has prolled the art to stardom. Okay, it is not the only one...