Not many people are aware of who created the original half guard. Conversely, apart from Eddie Bravo’s lockdown, the people behind different half guard variations are also not exactly BJ celebrities. But, if you ask anyone about the Coyote Half Guard, you immediately get a response in return – Lucas Leite. There’s no doubt whatsoever to who created one of the most effective guards in Brazilian Jiu-Jitsu. In terms of the half guard with the Gi, there is no other variation that even comes close. Now, there’s a brand new Lucas Leite DVD out there on the subject of the Coyote Half Guard. This time though, it is “The Coyote Half Guard No-Gi” instructional. And it is just as awesome as its Gi counterpart.

ON SALE HERE:
Lucas Leite – Coyote Half Guard No Gi

Lucas Leite is a multiple time world champion that certainly knows his way around the guard. his take on the half guard pretty much revolutionized modern BJJ. Although it may not have been as remarkable as Danaher’s leg lock revolution it certainly didn’t go unnoticed. Talk to any high-level grappler about the half guard and Lucas Leite’s Coyote half Guard is always going to pop up. In fact, it is the best known Lucas Leite DVD to this day. Well, the Coyote half guard No-gi might just take up that mantle now that itis out. Read on and discover why.

Checkmate certainly have one o their best ever competitors in Lucas “Loucura” Leite. He is a wild guy that has a very distinct attack-minded style of grappling. He is an extremely slick grappler that is known for beating bigger and stronger opponents on a regular basis. Of course, his main strength is his half guard, particularly the version he developed – the Coyote Half Guard. Leite is a true artist in the Gi, but he is particularly crafty when it comes to No-Gi Jiu-Jitsu.  In fact, all of his world titles come in No-Gi.

Leite is a three times No-Gi World BJJ Champion on top of multiple Pans and Abu Dhabi titles. He also has plenty of accolades in the Gi, but not nearly as impressive as his No-Gi record. The 37-year-old discovered Jiu-Jitsu in his native Sao Paolo in Brazil. Like many others, it was that legendary UFC 1 that got him into the sport. Leite started off with Ryan Gracie before switching to Leo Vieira’s gym where he became a fearsome competitor. In fact, it was Vieira who taught Leite the fundamentals of the half guard, inevitably leading to the creation of the Coyote half guard.

As of 2007 Leite is based in the US where he is teaching and competing. To be honest, he is not doing much competing at the moment but we don’t mind as long as there’s a fresh Lucas Leite DVD every now and then. And the Coyote half guard No-Gi edition was precisely what we’ve been waiting for.

The Coyote Half Guard

The Leo Vieira black belt’s Coyote half guard certainly changed how modern grapplers approach this position. That said, once he conquered the world stage with it, he released a Lucas Leite DVD on the subject. It is safe to say it went viral and for a good reason. that half guard variation was the missing link to the high-level half guard game. Given that it was the Coyote half guard that brought Leite many of his titles, many people turned towards it. Nowadays it is pretty much guaranteed that if you end up in a high-level grappler’s guard, it’ll be a variation of the Coyote half guard.

The Coyote half guard is basically the underhook half guard on steroids. Lettie changed just those aspects of it that neede improvement, ending up with the perfect half guard variation. It usually starts with a knee shield until the underhook is in place. The half guard in itself is somewhere in the middle between a deep half guard and a regular underhook half guard. that said, the mechanics are mostly down to the way Leite hooks the leg with his legs. Sweeps and submission attacks are plentiful, as are transition options. Grip fighting is also a major part of Lucas’s half guard game, as is some advanced body movement and positioning.

Just like the first DVD set, that was all about the Coyote half guard in the Gi, this Lucas Leite DVD has four distinct parts. Each of them goes over crucial elements of the system, only to bring everything together at the end./ This is a proven way of teaching when Leite is in question, as demonstrated by his Gi Coyote Half guard instructional.  The Coyote half guard No-Gi follows in the same pattern but does expand a little on the previous one.

In terms of organization of the information on the DVD, each part contains a crucial step in the game. For starters, volume one goes over ways to pull or enter into the Coyote half guard. Once there, Leite addresses some defensive aspect to repel the most common attacks. Part 2 is all about sweeping while threatening with double attacks. Part three ventures into positional defense strategies, octopus guard transitions and crucial escape combinations. Finally, Leite wraps it up with some crazy details on many common scenarios, like double underhooks Coyote half guard, countering sprawls, back takes and some live rolling sessions.

The first thing you learn in this Lucas Leite DVD is how to pull the Coyote half Gaurd No-Gi edition. In No-Gi there’s no time to waste and Leite likes to get to the position as soon as possible. From there on, it is all about being comfortable and denying your opponent any attacking avenues. To that extent, D’arce defenses are high up on the agenda. Gi or No-Gi a strong Brabo choke is going to pretty much destroy every half guard. Leite has a simple solution to the D’arce as the most obvious and easily attainable attack form the position. Speaking fo defenses, he also covers great ways to prevent knee slices by transitioning in attacks like foot locks.

The Dogfight position, which is the next crucial stepping stone is also addressed in this volume. Lettie offers a whole host of opportunities here, from sweeping to taking the back and even going for the kiss of the dragon. A brand new tactic is his take on deterring pressure passes and it makes the Coyote half guard that more effective. His take o escaping shoulder pressure works from just about anywhere, not just the half guard.

The second volume focuses on some attacking opportunities. Namely, the first thing Leite likes to do is to get on top. the mechanics of the Coyote guard, mostly the innovative leg hooking system, allow for an easy sweeping opportunity, In fact, it offers plenty of sweeps in many different directions.

The knee shield is the starting point, priding an easy and secure launching pad for attacks. In terms of attacks, Leite sets up sweeps from pretty much anywhere. Whether you like to go up to the dogfight position or pull the opponent towards you with a Russian 2-on-1 Leite has options for you. Moreover, he does not just focus on sweeps. he often mixes them up with crucial submissions like the Dogbar and the Kimura trap. A couple of transitions to the mount and back control wrap up the second portion of this Lucas Leite DVD.

The third part focuses on even more attacks. this time, however, the moves and concepts become much more advanced. Namely, all fo the Coyote Half guard No-Gi tactics so far were easy to use for just about everyone. The stuff in this volume is better for more advanced grapplers though, The reason for this is the transitions into different open guards and specific submission attacks.

The octopus half guard is another forgotten half guard that actually works really well. Lucas has several options from there, giving a new edge to both the Octopus and Coyote half guards. Some crucial counters from this volume open up crazy attacking opportunities no opponent will expect. There are options to prevent the mount, deal with a backpass and even escape side control int the Coyote half guard. The X-guard transition, along with the toe hold it opens up is pure sorcery!

The last volume of the Coyote half guard No-Gi Lucas Leite DVD is all about specific scenarios. in essence, it is a Q and A with Lucas already aware of what the common questions are. He covers just about every spot you may find yourself in, from sprawls all the way to defending the weave pass. Some crazy details like the exact angle of knee shield placement also find themselves in this volume. There is also the wiggle-wiggle sweep, which is just as funky as the name suggests.

Capping things off area few live rolls where Lucas does nothing but the Coyote half guard. here he brings everything together, explaining what he did in every situation during the different rolls.

There’s something about the Coyote guard’s simplicity that catches even high-level black belts by surprise. When you know how to deter every common counter-attack and launch attacks of your own, you really have a great spot to work from. This was the original intention behind the Coyote Half Guard No-Gi instructional. Moreover this Lucas Leite DVD displays the very moves he sued to win all of his No-Gi world titles.

ON SALE HERE:
Lucas Leite – Coyote Half Guard No Gi 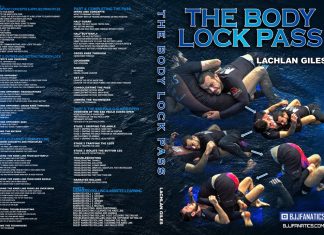