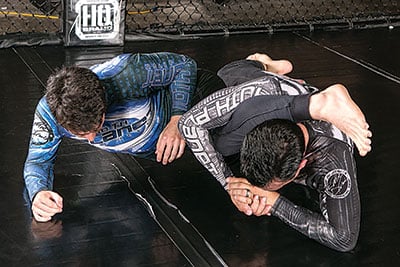 Once again we look to the “alternative” Jiu-Jitsu world for an effective technique. As far as the 10th Planet Jiu-JItsu system goes, people are either for or against. There’s rarely someone who doesn’t have an opinion about Eddie Bravos BJJ system. So far, we can safely claim that there are things that are as likely to work as someone getting a black belt in a year (without paying for it). What we also know is that some of his moves are unstoppable, even if the opponent is of the highest level. One of these universally potent moves coming out of 10th PLanet is the electric chair sweep.

In case you’re wondering about the effectiveness of 10th Planet moves, there’s a way to put your mind to ease. Remember that famous 2014 Metamoris rematch between Eddie Bravo an Royler Gracie? Well, there’s hardly any better testament to the effectiveness of the lockdown and electric chair sweep than that match. He managed to pull it off on the legendary Royler Gracie multiple times during the match. In turn, plenty of !0th Planet students find regular success with it in high-level competition. It’s time you start thinking about adding it to your gameplan as well. At least if you want to be successful at sweeping from the half guard, that is.

Deepen your understanding of the half guard, especially in No-Gi. Use one of the best in the sport to lead you through every step of mastering this position. Bernardo Faria has a DVD dubbed “The No-Gi Half Guard”. Its techniques are as effective as the title is simple. Go for it!

As far as half guard variations go, there is certainly something for anyone in Brazilian Jiu-Jitsu. No matter what your game is, you can find a half-guard variation to suit you. While some are very specific to a certain game (like the tornado guard) others are pretty much generally effective. One such position is 10th Planet Jiu-JItsu’s lockdown.

When you think about it, the lockdown is just a way of controlling an opponent’s leg via a system of wedges. Basically, the goal is to triangle your legs around an opponent’s leg, and then proceed to hide the shin of the leg that’s on top. Let’s get deeper into this.

For the lockdown, you start on the bottom of half guard. You need to have your outside leg go on the inside, trapping the opponent’s shin. This is generally contrary to most other half guard positions. Once you have the leg inside, you use your other leg to build a triangle. The second leg is the one that goes on top of the one you used to trap the shin. Once you have this wedge though, you need to look to reinforce it. To do so, sneak the foot of the leg that’s on top of ht triangle under the opponent’s trapped leg, as low on the ankle as possible. In order to stay in the position, be sure to flex both your feet and keep them there at all times.

Despite a path to the electric chair sweep, the lockdown offers a great amount of control with minimal effort. A very useful application is off your back, which in most other half guard variations is a no-go position.

Setting Up The Electric Chair Sweep

From a basic lockdown, you need to find both underhooks. As a general rule of thumb, the first underhook you look for is on the side of the trapped leg. To open up space from your back simply pull both your knees toward the opponent’s butt, then extend the legs upwards as far as possible. You’ll notice that the hips of the opponent lift up as a result and their balance is in jeopardy. From there. swing the extended legs to the side you’re planning to underhook. This is going to force your opponent to base out, which opens up space for the underhook. Once you have it, return with your back on the mat.

Now it’s time to get the second underhook, this time though, under the opponent’s thigh. In order to get it, repeat everything you did, only swinging to the opposite side this time. Remember to keep the underhook you got in place the entire time. When the opponent bases, underhook their thigh as deep as possible. Now, you’re all set for the electric chair sweep.

Finishing the sweep involves you repeating the knees in, legs extended and swing once again. Since you’re already on your side, you’re going to do it swinging to the opposite side (the side of the trapped leg). When you finish, you need to make sure you have the opponent’s underhooked thigh on your shoulder. Only when this is in place, you can pull yourself up, getting on top with the opponent’s legs in a split.

AS far as sweeps in BJJ go, not many end up in a really tight pressure passing position. Well, the electric chair does. In fact, inflexible opponent’s are often going to tap to the pressure alone. Once you complete the electric chair sweep though, you have many options apart from passing.

First of all, you have a very stable position as long as you don’t let the thigh slide off your shoulder. So you can just extend your legs and project your weight forward, torturing your opponent. Passing options involve letting go of the lockdown to go over the trapped leg, or getting the top leg across your body and ending up in a leg drag.

When you pass, your opponent is going to be so grateful that there’ no more pressure that’ll get submissions for free. Actually, you can finish a fight directly from the completed sweep position. Simply twist the top side leg of the opponent toward teh other leg and apply pressure forward. You’re going to get a crotch-ripper submission with absolutely no effort. However, keep in mind that this move is illegal in some competition formats.

From the same position, you can also get the leg over (like for the leg drag pass) and hit a slicer. Once the leg is over, turn back, grab the foot of the trapped leg and roll over the shoulder. This is the “Vaporizer” as Eddie Bravo calls it and is the nastiest slicer in BJJ.