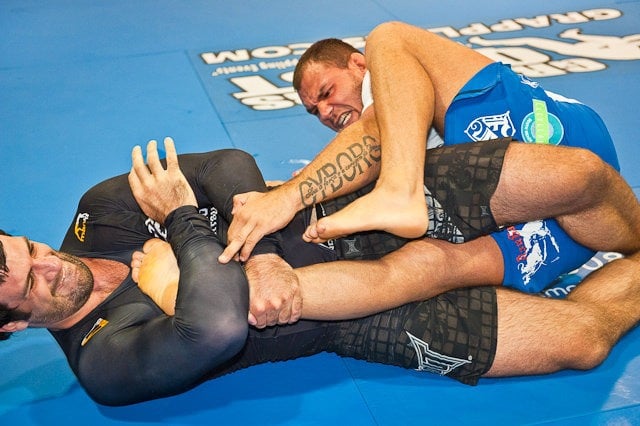 There’s one leg lock submission out there that is dubbed the king of leg locks. Surprisingly it is not the heel hook. There’s a simple, and partly stupid explanation as to why this is the case. The one reason why the knee bar reigns (or did, at least) as the king of leg locks are rules. TH knee bar is a submission legal at brown and black belts across all competitions. And, since the IBJJF has a few decades on all other competition format and doesn’t allow heel hooks, the knee bar is going to remain the most effective leg lock for the time being. In light of the modern leg lock obsession, this raises the need for effective knee bar escapes. Despite the power to be a truly debilitating injury, the knee bar is just as dependable as any other submission in BJJ.

There’s something about getting that knee bar. Despite all the similarities it beats getting an armbar by a country mile. Isolating someone’s leg for a knee bar leaves no doubt about what’s going to happen. People sometimes take armbars, an even wiggle out of seemingly tight ones. With the keene bar, people tend to tap when on the wrong side. Feeling that pressure on the knee has a panic-inducing effect, meaning taps are much more likely than looking for a way out. This, along with its relatively unrestricted use, makes the knee bar a very powerful tool. It also makes knowing knee bar escapes a must instead of just a luxury.

Escaping the knee bar is not overly complicated but it does require you to understand the submission. When you learn armbar escapes, you do not learn them before learning the armbar. So, the first order of learning knee bar escapes is becoming informed about the mechanics of the move. Next up, you need to learn how to recognize that people are attempting to attack you with it. Stopping an attack before your opponent sets up is the best possible defense. Furthermore, you’ll need to discover how to become comfortable in the position by making key adjustments to prevent the submission. Only then can you think about specific ways to get out of there.

Tom DeBlass is a black belt with an impressive record. The former UFC vet has not been submitted for years, both in competition and in training. He brings his secrets into the light in his “Submission Escapes” DVD set. He coves escaping all kinds of submissions but pays special attention to leg lock escapes, knee bars included.

How the Knee Bar Works

Let’s take knee bar escapes step by step and look into the submission itself first. The knee bar is straight leg submission that focuses on the knee joint. It works much like an armbar does. Your hips should be positioned right above the kneecap in order to obtain the best leverage point. Your arms control the end of that lever (the foot) pulling it towards your chest. The submission is due to pressure applied with your hips on the opponent’s knee, opposite of its natural bending direction.

Since we’re talking about a leg here, the positional dynamics are where the knee bar differs from the armbar. The focus with the knee bar is on controlling the whole leg with your whole body. During this, your legs have the task of isolating the leg and controlling the hip. Since the legs are much longer than the arms, your grip is also different. In order to finish a knee bar you need to have the foot pointing towards your back. Furthermore, you need to control it with your head, while having a figure four grip in place. Alternatively, you can have the shin of the leg you’re attacking under your armpit as well.

Also different to an armbar, knee bars rarely work when your belly is facing the ceiling. For the knee bar, the direction of work is mainly to the side. Getting a belly down knee bar is hard and potentially very dangerous. Due to the positioning of the hips, sideways knee bar finishes are usually the norm.

What to Look For When Defending

Now that attacking with the knee bar is out of the way, let’s focus on knee bar escapes. Before you think about anything less you need to think about safety. That means, that tapping is the only escape that works 100% of the time and you need to be ready for it. That said, there are other, less ego-damaging ways out of a knee bar.

Preventing your opponent from settling into the knee bar is key. So, once you see a knee bar coming you need to think about neutralizing it immediately. The usual positions for getting a knee bar are guard passes (half guard in particular) and the X-guard. However, these are by no means the only positions for knee bars. If you see an opponent looking to transition into a knee bar, you need to be ready to bail and re-engage later.

If you’re already caught in the position, it’s time to think about preventing extension of the leg. there are two main ways to do this. First up you need to make sure you use your free leg to hide the leg that’s in trouble. The best way to do this is to triangle your legs. Also, since your opponent is looking to use their whole body, you need to try and get at least one of their arms with your grips. This is going to require them to set it free and then break your triangle before they get the tap. Make no mistake, they can do all this, but it’ll take time, which you can use to escape.

Finally, the more you manage to keep their knees apart, the easier it is going to be for you to slip out.

When are you safe from a knee bar? The two main points are getting on top and sliding your knee past the opponent’s knees. Once you have that, even if you’re still in a knee bar position, you’re all but safe. However, getting there if all your preventative measures didn’t work, is where techniques and details come into play.

One really reliable knee bar escape is changing the point of their leverage. If your opponent has a knee bar slapped tight and you can’t get your knee out of there, then look to push their knee further up. the goal here is to change the leverage point so you’re not in risk of a break. Then, you can look to completely bail the position. For this, you’ll use your free leg to push their top leg towards their own chest. Remember to push right behind their knee for the most leverage. A good hint is to also turn your leg with your toes towards the ceiling in order to disrupt leverage even more.

Another solid option is preventing the opponent from extending their hips. For this, you’ll first have to triangle your legs, in order to have enough time to get your upper body into position. From there on, the goal is to place a seatbelt grip around your opponent. However, instead of keeping it in a traditional back control manner, you want it to be more like an arm triangle. When you have everything in place, simply lay to your side and open up your legs. There’s no knee bar for your opponent since the angle of your body, because of the seatbelt grip is now different. You’ll end up in a leg drag-like position and get out with ease, ending up on top.

How To Master The Kneebar For BJJ And MMA