Side control is arguably the most common position in BJJ. There’s no way past a side control variation during a roll, whether you’re on the receiving or giving an end of it. Very often, people misunderstand side control, especially in terms of points and competition use. The fact that there are several variations which sometimes do not seem to fit the description is even more confusing for people new to the sport. As a position, side control is a fundamental pillar of Jiu-Jitsu basics. There’s no way around it and the sooner you understand all the associated variations, the sooner you can put them to good use.

Side control is one of those positions that people perceive differently as they progress through Jiu-Jitsu. At first, they see it as the ultimate position of pressure, where you get points and you can hold your opponent indefinitely. Both of these perceptions soon prove to be wrong, though. What students soon find out is that side control is actually a very dynamic position, especially against an experienced opponent. And even though it is part of the Jiu-Jitsu basics, holding on to it requires time on the mats and repetition. Only when you truly get eth dynamic nature of the position and you learn how to with your weight effortlessly, you can use side control to pin someone in place.

From a competition perspective, many people have difficulties grasping the points associated with side control. Let me make it abundantly clear – there are no points! Yes, you read that right, side control brings you nothing more than perhaps an advantage. The three points people usually associate with it are actually awarded for passing the guard. Since most people obtain side control after passing, the perception is that the position itself brings points. Also, there are no points if you’re on the bottom in side control and you manage to end up on top. Since there’s no guard involved it is just a reversal and not a sweep .therefore, there’s nothing more than an advantage once again.

Do not just learn Jiu-Jitsu basics, learn them in a fun and entertaining way. Who better to amuse you while teaching you slick techniques and sneaky counters than Kurt Osiander! His “Fundamentals Of A Jiu-Jitsu Renegade” DVD set is a must-have for beginners and experienced grapplers alike. Sneak peak: it offers so much more than just side control information…

Side control is basically a cross body position which allows you upper body control. IN terms of BJJ, it is a great place to be, especially if you have a dynamic attacking game. Side control offers plenty of submission options that involve both joint locks and strangles. It is also the gateway to checkmate positions like the mount or back control. Furthermore, there are actually very few direct attacks a bottom person can efficiently do, making it a very safe spot to be.

The key principle of the position is upper body control through pressure and mechanical leverage. when in side control you need to control either the neck or the hips of your opponent. Traditionally it is more common to control the head. your body should be at a 90-degree angle to the opponents. This provides both pressure and stability. In terms of Jiu-Jitsu basics, you want to be able to stay in side control at least 5-10 seconds without giving away the position.

This might prove to be a really difficult task. If you’re up against an experienced, or much larger and stronger opponent, side control is very difficult to retain. There are certain tips and tricks to help weight distribution and pressure, of course. However, they do not guarantee you a long ride time, nor an inescapable pin. The best way to achieve constant control is by staying active. If you keep moving, holding side control is going to become a breeze. To do that, you’ll need to switch back and forth between some of the most common side control variations in BJJ.

First order of business is head control. The dreaded cross-face is the ultimate weapon of choice here. That means one of your arms is going to go under the opponent’s head. Your shoulder is then going to drop onto their chin, blocking their movement. The hand of the arm can stay on the mats, or go into the opponent’s opposite side armpit for extra discomfort.

The key point in the side control variation is staying tight. Your knee on the side of the cross-face should touch your elbow at all times. the other knee should be right up against the opponent’s hips. Your free arm can go in a lot of different positions, depending on the situation. You can’t master Jiu-Jitsu basics without really getting the nack for this one.

Many people’s favorite (and certainly one of my top contenders) is the 100 kg side control variation. For this positions, the focus is completely on pressure. It is a lot less compact than the classic one and it allows for more space. But where it lacks in compactness it makes up with pressure and weight.

For the 100 kg position, you’re pretty much in the same starting position as with the classic, You still need the cross-face, of course. The main difference is in leg positioning. For the 100 kg side control, you want both your legs sprawled behind you. You also have to pay attention to where your chest is positioned. You have to keep your chest right in the middle of the opponent’s torso. Actually, being a bit more towards your side is even better. If you go too far over you’ll be light as s feather and easy to topple over.

A cool wrestling trick is to dig your chest into your opponent’s ribs while pushing off your feet. Also, make sure you have your shoulder pressing hard on their jaw. A lot less direct attacks are available from here but it is the strongest controlling side control variation there is.

The Kesa Ggatame is a Judo classic, but in Jiu-Jitsu this position is only used sporadically. However, in terms of transitioning in between side control variations, the Kesa Gatame is the ultimate pit stop. Kesa Gatame Jiu-Jitsu basics are head control, trapping the near side arm and leg positioning. For this variation, you need to be on your hip/butt, legs pointing towards the opponent’s head. Furthermore, you need to have your legs spladeled and keep your head low next to the opponent’s head. It is dangerous to stay in this position long in BJJ, because an opponent might get your back if they know how. 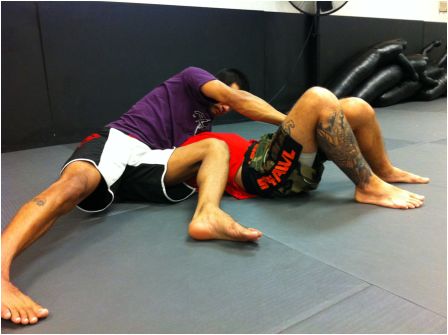 The reverse Kesa Gatame is a much more viable position for BJJ. As the name suggests, it is pretty much the same as Kesa Gatame, only done in reverse. That means that for this position. you’ll be facing the opponent’s legs. The position is also called twister side control and is great for hunting submissions. The reason for this is that your body is blocking your opponent’s view, meaning you can set up submissions without them being any wiser.

North South And Knee On Belly

Knee on belly works perfectly with side control, however, it is a position of its own. Getting there also merits two points, if you can hold on longer than 3 seconds. Despite this, knee on belly and side control will always work together, so if you like to become better at side control, make sure you also include knee on belly drills in your game.

Pin And Submit At The Same Time From Twister Side Control

Simple Side Control Escape Concepts You Must Know