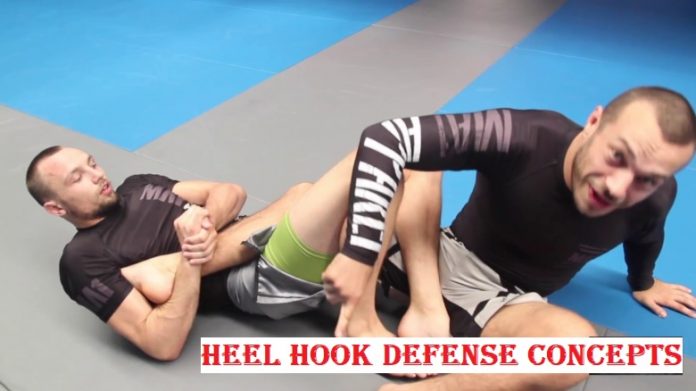 Ankle locks, toe holds, knee bars, calf slicers… No matter which leg lock it is, none can even come close to the devastating power of the heel hook. This twisting submission is the source of large amounts of controversy in the world of grappling. Still, to this day, the heel hook is not allowed even for black belts under certain competition rules. However, the landscape of Brazilian Jiu-Jitsu has gone through some major changes lately, one of them being the resurgence of heel hooks. Normally, this prompted grapplers worldwide to trace back and look to learn this highly effective submission. As it becomes more and more popular, so rises the necessity of a reliable defense against it. For a while there, nothing seemed to work. Now, we’ll take a look at the few heel hook defense methods that can actually get you out without a limp.

The most unlikely duo in the grappling world, Eddie Bravo, and John Danaher are the main culprits behind today’s leg lock craze. Danaher came out with a system and Bravo gave him the platform to popularize it. Walk into any BJJ gym across the world and you’ll see a tap due to a heel hook submission or two. What you probably won’t see are legitimate defense attempts too many of the heel hook attacks. Especially the dreaded reverse heel hook. There’s much deeper reason for this than just the technical superiority of the heel hook submission. What many people fail to grasp is the psychological component behind heel hook defense.

For decades heel hooks were the source of horror stories in Brazilian Jiu-Jitsu. Much like all other Boogeyman-type stories, there nothing more than folklore. However, all this resulted in a deep-rooted fear of heel hooks, so much so that people would much rather tap just to the threat of it than look to intelligently defend. If you can get past the psychological stumbling block you’ll see that a heel hook is just like any other submission out there. It is based on certain mechanics and if you can counter them efficiently and accurately, you can escape from the submission.

Craig Jones knows heel hooks. What he also knows is heel hook defense, and he shares all his little tricks in his “Down Under Leg Attacks” DVD. Take your leg lock game to a whole new level with his amazing material!

Don’t Be Afraid OF The Heel Hook

What is so scary about the heel hook exactly? The potential for injury is actually no greater than any other submission holds out there. Actually, a choke is far more dangerous, given that it can actually kill someone if held for too long. Takedowns and scrambles have also resulted in far more injuries than heel hook attempts so far.

What the heel hook submission basically does is use a wrench-like mechanic to blow out your knee. In particular, it involves manipulation of your foot in order to build up pressure inside your knee, which results in ligament tears. Which ligament exactly is put under strain depends on the type of heel hook attack.

Essentially there are two main ways of getting a heel hook. One is the so-called straight heel hook in which the goal is to place the fingers of the foot under the armpit, with the outside of the foot facing the armpit of the attacker. In the modern day Ashi Garami leg lock game which emphasizes control, this is the less reliable variation. The second version is the reverse heel hook, in which the placement f the foot is opposite. Namely, this time when you trap the fingers, you’re looking for the inside of the foot to be facing your armpit. This one is really nasty, especially if you have a solid hip control as well.

Just like with any submission, for an efficient heel hook defense, you need to understand the technique first. So, even if you do not like heel hooks, learn the correct mechanics so that you know what you need to prevent/escape. If you only focus on defending without really knowing what you’re defending against, you won’t get a lot of success.

Before we move on the actual defensive principles and concepts let’s get something clear. Acting irrationally and panicking while in any kind of submission is going to get you hurt. Do not try to force your way out of a heel hook or you’ll pay dearly and add fuel to the “they’re dangerous” fire. Wouldn’t you try to power out of a Kimura right? Heel hook defense isn’t any different, it needs to be smart and methodical, not instinctive. So, exercise caution every time you’re looking to defend submissions in Jiu-Jitsu.

That said, there are a few main steps in heel hook defense you need to understand and be able to recognize. First, remember that there’s no leg lock of any kind without knee control. The moment your knee clear the line of the opponent’s hips, you can sit back and relax. There’s no more leverage for anything but a toe hold which is easily defendable at that point. So, the main aim of a counter leg lock game is getting your knee to safety.

The whole point of the modern-day leg lock system is control of the hip. This makes getting the knee out quite difficult, especially against seasoned opponents. So, the best approach is reverse engineering a heel hook attack in order to identify the crucial mechanical advantages of it. For that, we’re going to use three distinct steps.

The first thing you need to think about with leg locks is prevention. This is where the knee clearance principle is king. Every modern day leg locker is going to look to establish control over all three major joints of your leg before attacking. While the control itself is also escapable, the best approach is to completely prevent someone from getting there in the first place. Experienced grapplers are always going to open up entries into leg locks and there’s not much you can do about it.

However, remember that your goal is to prevent them from putting a clamp over your knee. For the very basic Straight Ashi Garami, this means blocking the opponent from establishing hip control. To further make sure you can get out safely, aim to keep their knees open since this gives you rotational control over the knee. Once the knee is out you can turn and push with the other foot to completely disengage. Against a more elaborate position like the Inside Senkaku, the goal is to prevent the wedge system. This means allowing your opponent to triangle their legs tightly over your knee. Pushing on one of their knees is very often going to allow you to create enough space to clear the knee-line.

In certain situations, though, you’re going to end up in an Ashi Garami variation. This is the time for damage control. What you should NOT do is lay back and accept that you’re going to get submitted. The Ashi Garami is no different than mount or back control and you’re getting out of those each training session. Once in a position, the opponent still has to dig your foot out, apply tension and only then go for the submission itself. This allows for plenty of time to work.

The one thing you need to worry about here is foot safety. There are different technical ways of doing so in different positions. For now, we’re sticking with concepts. Depending on the position you could cross your feet, hide a foot under the opponent, kick out or curl your leg, etc. Whatever you do, the goal is to make them really work for a grip. This, in turn, is going to allow you to mount a heel hook defense.

To break out of most Ashi Garami positions you need to create space to allow your knee line to clear. There are two main ways of achieving this: either breaking apart their hip control or shifting the angle so that you can trap one of their legs while manipulating the other. Mess around with it a bit and you’ll find what exactly suits you from each position.

Holy sh#t territory. This is where you should be careful and apply the rule of not fidgeting uncontrollably. This is the stadium in which your opponent has established grips and is looking to put your leg under tension. Do not attempt to disengage teh Ashi Garami at this point. It’s too late for that, now you need to focus on the grip fighting. Finishing a heel hook with one arm is a big task for most people, especially since you can use your other foot to further interfere. This means a mandatory 2-on-1 grip on one of their hands.

Gripping an arm is not going to help you much if you do not prevent/break the grip. The aim is to get keep their arm as far away from your foot as possible. Keeping your elbows to your body is a great way of frustrating your opponent. The trouble is, that even with one grip, there’s the danger of submission. If you control an arm you’ll need to be patient and allow for the opponent to re-adjust in order to completely release your foot and look to hide it. Now you’re back on step number 2.

As a side note, remember that tapping out is also a legitimate heel hook defense. NOt tapping and walking around on crutches for months is not. So if you feel the tension building up o the leg, do not wait for the opponent’s breaking mechanics. Tap early and roll again.