Khabib Nurmagomedov has been retired in martial arts for almost nine months now, but he is still very much attached to the sport, as a spectator perhaps more than before while he had to focus much more on his own career. And of course, the undefeated retired champion watched UFC 264 and its main fight between Conor McGregor and Dustin Poirier.

He is actually particularly interested in this, as these are the fighters he met during his championship reign. He overcame both in a similar way, but that’s actually the only thing similar in those skirmishes. With Conor, everything became personal and there was a lot more to it than the classic competition of two fighters, while with Dustin, everything was in a very correct frame. A lot of respect existed before the fight and remained after it.

So it should come as no surprise who Khabib supported and to whom he kind of dedicated what he wrote shortly after the fight ended.

“Good always defeats evil in the end. Congratulations Dustin Poirier, I hope you take the championship belt by the end of the year,” Khabib wrote briefly on Twitter.

Good always defeats evil.
Very happy for @DustinPoirier I hope you will get the belt end of the year

It is clear that Khabib is still not indifferent to these fighters, and there is no doubt that his status was affected by McGregor’s behavior this week, where he also referred to Khabib within his verbal escapades, stating that he was a fighter whose late father set up fights. We don’t know if he meant that he set up the one against him, in which the Dagestani forced him to tap by choking and from which we remember Conor’s statement between the two rounds that this is all just business.

Khabib has previously announced that he does not believe that Charles Oliveira will welcome the end of the year with the title of champion, and in addition, he announced Islam Makhachev as the future champion. Makhachev is leading the UFC’s Fight Night next weekend, but a possible victory against Thiago Moises will not be enough for him to activate his championship ambitions. Meanwhile, Khabib believes the title will go to Poirier, a fighter many believe he absolutely deserved. 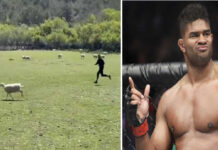