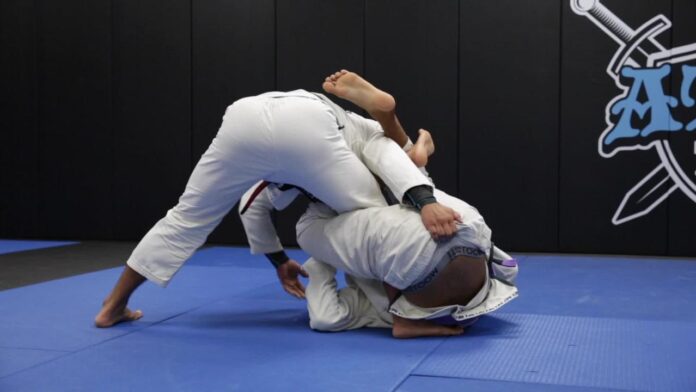 The 50-50 guard is a staple of open guards in BJJ. It has been proven to be a highly effective guard for top competitors across the sport. From Gi point fighters to No-Gi submission hunters, one of the rare common things that work for everyone in Jiu-Jitsu is the 50-50 guard. One of the reasons why this guard is so successful is that it is quite hard to pass, while at the same time offering easy sweeps and access to submissions. There is not much we can do about the sweeps and submissions. However, there certainly is lots to do when trying to figure out how to pass the guard.

The 50-50 guard has gotten a bad reputation over the years. First, everyone was saying it is just a leg locking position, and with heel hooks being the Devil’s spawn, not many were willing to experiment with it and evolve it. Then, it was a stalling position when done in gi competitions, but that turned out to be a result of the ruleset involved more than the guard itself. Finally, the guard is now recognized as one of the best bottom positions to play in BJJ. That, of course, raises another question – who to pass the guard that offers so many offensive options?

Contents hide
Hоw To Pass The Guard: A General Philosophy
The Formula For Passing The 50-50 Guard
How To Practice 50-50 Guard Passes
Wrapping Up

Hоw To Pass The Guard: A General Philosophy

What is the best way to learn something? Understand the thing that makes it all work. When it comes to passing the guard, the biggest obstacle people face with any guard is that they try to actually pass a guard. You can’t do that. There is no way that you can actually pass someone’s guard in BJJ. The phrasing we use is largely at fault for such a wrong impression people have of passing.

In essence, that means the answer to the question of how to pass the guard is there is no way to pass the guard. You can, however, pass the legs. If you focus your efforts on getting past the legs, you’ll have a much easier time than if you are trying to beat a specific guard. Once you start applying this philosophy to your passing, even the 50-50 guard is not going to be an obstacle anymore.

Let’s dumb things down even further. What is the end goal of passing? The easiest way to make it easily understandable is to give a very specific endpoint. In other words, the moment your knees and hips are past the hips of an opponent, you can consider a pass to be complete.

That takes care of the philosophy of passing (pass the legs, not the guard) and the end goals (knees and hips past the hips). All that remains now is a methodology, and I am going to generalize with it as well. To achieve your goal y using the philosophy of passing you need three things – stay safe from sweeps and submissions, break the structure of the guard and get past the legs. As long as you think in this direction, any guard pass you look to set up will work, even if you’re dealing with a seasoned 50-50 guard player. 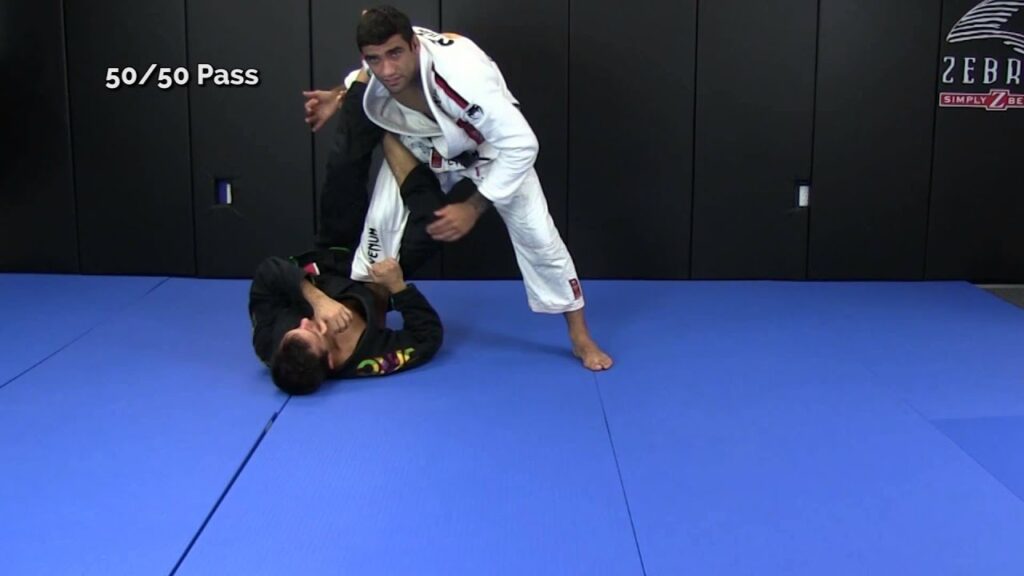 The Formula For Passing The 50-50 Guard

The one thing to keep in mind is that passing any guard (or rather, legs, now that you know better), works very similarly in both Gi and No-Gi. Still, when it comes to passing the 50-50 guard, I’ll offer a couple of examples that get you past the legs with a very high percentage of success. In addition, they offer ways to pass in two different directions. This will demonstrate that you can do pretty much anything you want as long as you adhere to the general philosophy of how to pass the guard.

In any situation involving the 50-50 guard, if you want to deal with it, you will need to make sure you are the person on top. That means not sitting on your butt and trying to solve the puzzle from there.

So, once you are standing, you need to address balance first, (staying safe from sweeps). The leg that is caught in the 50-50 should be planted on the ground, but you shouldn’t keep all your weight on it. The goal is to step wide with the free leg, changing the angle so that your hips are square in relation to your opponent.

This I “safe spot” of sorts that will allow you to break the structure of the guard. The easiest way to do it is to reach back and push the ankle of the opponent’s far leg towards their head. Keep a grip at ankle level, whether it is direct or a pants grip.

Now the guard is no more and you just have to get your knees and hips past one leg. You have the option of stepping back before solving the second leg, or you could go directly. In both situations, the leg needs to go down to the ground (kind of a stack) and you simply push it back, X-pass style.

In No-Gi, the stages are the same and what you are doing is pretty much the same as in Gi up to the point where you need to pass the one remaining leg. Instead of going back forward, and trying to push the leg to the ground and clear it, the lack of grips in No-Gi allows you to simply spin back for a direct route to a pass.

How To Practice 50-50 Guard Passes

let’s be honest, the first few times you try passing the 50-50 guard in this manner, you will see that it is harder than it looks. Most of it has to do with balance, and the moments before you establish a base and an angle in which the opponent can get you back to the ground or go for other attacks. That simply means that after you get the hang of the passing philosophy and specific 50-50 passing pattern, you need to get some drills under your belt.

Using progressive resistance drills will require a partner with experience and focus. If you want to master how to pass the guard, especially the 50-50, you will need to do things 100%, no slacking. Here’s who to set it up:

First, the person that is doing the passing has to “win” all the time. there’s no point in the bottom person sweeping them while they’re trying to learn something new. Second, the resistance the bottom person provides would increase as the top person’s performance gets better, but it should never jeopardize their 100% success while they are learning.

The drills should work in stages, just like that passing philosophy. However, you need to start backward. the first resistance drills you will do are from the moment you have the guard structure broken and are about to pass the one leg left. When you feel comfortable there, you move backward through the stages, before looking to train the entire movement starting from a seated position. It will take months, but once you get it down, no 50-50 guard is ever going to be a problem again.

There’s no need to be afraid of any position in BJJ. Most times it is the fear of the 50-50 gaud that gets people to freeze up and accept a sweep or submission. In reality, it doesn’t have to be that complicated. the 50-50 is just another guard, and when you know the general philosophy of how to pass the guard, it doesn’t matter which guard you’re up against. As long as you put in the reps and hours doing the drills, of course.