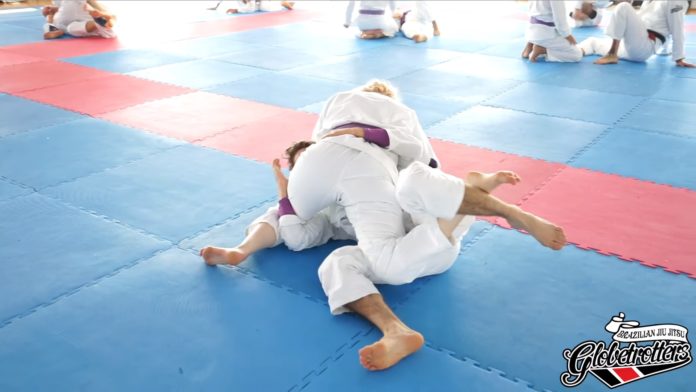 The BJJ Half Guard is one of the most interesting aspects of Brazilian Jiu-Jitsu. It comes naturally to people even if they are complete beginners, and it is quite enticing to play. However, you soon realize there are plenty of variations of it. Moreover,r you realize that they won’t all work the same for you, nor will every variation suit you on every occasion. Furthermore, creating variations become redundant after a while if they don’t evolve. One such evolution is the Fishnet BJJ half guard.

Playing half guard is not hard if you know what you are doing. There are certain aspects of ht half guard that are crucial and they come in the form of common half guard principles. As with every principle, there are exceptions, of course, but for the majority of BJJ half guard variations, these principles hold true. Before we go into the ins and outs of the innovative Fishnet half guard variation, we’ll explore some common principles of this popular BJJ position.

The World Of BJJ Half Guard(s)

In Brazilian Jiu-Jitsu, the half guard is such an instinctual position that it was actually developed pretty much by instinct. Gordo developed the half guard when he had an injured leg and was trying to hide it in order to protect it when rolling. At the time, the only alternative was the closed Guard, so the end product was – half guard. Since then, we’ve had a steady stream of half guard variations. Some are just flashy stuff, others fade away after a couple of years, while some remain for good.

The underhook half gaud is the most utilized version to this day, ranging from some basics to stuff like the Coyote half guard. Overhook half guard variations never really caught on, despite being highly effective when modified a little bit. That said, Eddie bravo’s lockdown half guard burst through most conception about the position, proving people can play the position with their backs on the ground. Then cam more modern version like the butterfly half guard that ties in perfectly with the modern leg-lock based game.

There are of course plenty of Gi and nO-Gi based half guard games in between, and they’ve all added to the huge pool of BJJ half guаrd options. However, it is the modifications to some of the basic versions, like the underhook half guard that really hit the nail on the head. The Fishnet is just such a half guard.

The Basics Of The “Fishnet” BJJ Half Guard

What the Fishnet BJJ half guard does is basically get past the issue of people trapping that underhook arm for Darces and other front headlock attacks. How? Simple – it takes the underhook away past the armpit, placing it much lower around the waist.

Let me take you through this variation, which I first saw from a really talented black belt named Nathan Adamson, from the beginning. Starting in the usual Z-guard(knee shield) half guard variation, you’ll be looking to get really deep hooks on your partner. Simply put, use the knee shield leg to kick behind the armpit, as you use the bottom leg to pull and sneak in the bottom arm under the opponent’s thigh. Nothing really unusual so far.
the major change comes in the form of the underhook arm which instead of just going under the armpit, now goes around the waist gripping the pelvis on the opposite side.

Hiding the head in the nearside leg completes the entry, but in order to get more control, you need one more key detail – the Coil. That top leg of yours that kicked under the armpit now has the task of scooping the half guard leg at calf level and twisting it so that the heel is facing upward. That’s when you’ve got your opponent trapped in the fishnet BJJ half guard.

Sweeping from there is pretty much guaranteed. All you need is to go to your knees and you’re on top, possibly looking at a back take or a simple push sweep. Alternatively, you can just do a hotdog roll and throw the opponent to the other side, putting them in an endless dilemma of which direction you’ll sweep to.

This gets us to the fun aspects of the Fishnet BJJ half guard. So far, we went through some of the basics like the position itself and entering from the most common half guard variation – the knee shield. Plus we looked at a couple of “basic” sweeps too, which work with a surprisingly high percentage of effectiveness.

There are a couple of things that ta top person might attempt when your underhook arm is so low. One is backstepping, hoping to go into leg locks or pass your guard. A simple transition of your grip on the half guard leg as they step back, and switching the hooks with your legs will prevent every option they have.

In fact, if an opponent tries to go back, or jump over, they’ll just give you their back, leading you to the position the very first sweep set up. If, on the other hand, they decide to stay there, you end up with a guaranteed sweep. Simply hunt for the far leg with the leg you’re using as a pole to stop the opponent from moving, and look to slap on a lockdown. This will get you on top, with a leg so entangled your opponent will have no idea what to do.

And, if you want to e extra evil, you can just go for the Vaporizer calf slicer rolling submission from there.

The Fishnet BJJ half guard is a very funky variation that has proven to be really handy for me on multiple occasions. Gi or No-Gi, this crazy little half guard works, and it particularly useful against larger opponents. Plus, the more advanced options that counter that backstep, jump over and leg lock entries are really useful to deal with high-level grapplers or those lightning-fast competitors. Give it a try!