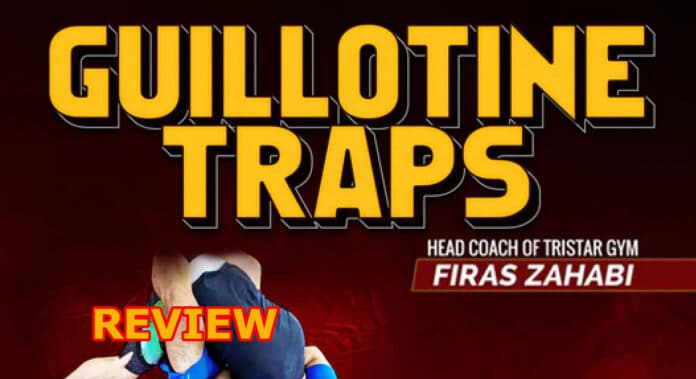 Firas Zahabi is one of those people in the BJJ community that you either know really well or have never heard of. Heading the famous MMA den Tristar Gym in Montreal, the Danaher black belt is a picture-perfect reflection of his teacher – methodical, logical, and constantly looking to innovate in a way that actually makes sense. Zahabi was very quiet on the BJJ instructional front for a long while, jumping aboard in the past couple of years. That said, he has a huge amount of knowledge and happens to be one of the best teachers around, so getting any Firas Zahabi BJJ DVD would be a particularly smart move on your side. Why not start with his Guillotine Traps instructional?

This Firas Zahabi BJJ DVD addresses the guillotine as the centerpiece. However, it looks into this popular grappling move much deeper than just the usual choke hold. Zahabi explores the guillotine as a position that you can use to control people from, sweep or pass with, and open up other versatile attacks. Moreover, he shares his “formula” on how to set it ll up by luring the opponent into traps, rather than going on a full-out war of endless exchanges.

The instructional is No-Gi, as Zahabi does most of his work without a Gi. There are three parts to this DVD, each focusing on a different aspect of the guillotine traps system.  There is plenty of material in each section, and Firas makes it all the more better by pausing videos and drawing over the image to help you understand exactly what is happening and what is about to happen.

Firas Zahabi is a Canadian of Lebanese origin, and the man behind one of the most popular MMA gyms in the world – TriStar Gym in Montreal, Quebec Canada. A John Danaher black belt, and coach of many famous names ranging from GSP and Rory McDonald to Ethan Crelinstein and Oliver Taza, he has proven himself over and over again to be one of the most competent grappling and MMA coaches in the world.

The 42-year-old started martial arts after watching that historic UFC1 and first-hand witnessing Royce’s handiwork in the octagon. The problem was, that he had no access to BJJ in Canada at the time. He went on to drill by himself, and practice on his brothers until he ran into a Renzo Gracie purple belt and started learning from him. A true mat rat, he quickly ended up running classes in TriStar Gym as early as a blue belt, and eventually inherited the entire gym after the original founder had to move on.

The gym has since produced incredible grappling and MMA talent, with some of the most famous fighters ever either coming from the gym or going to train there on multiple occasions.

In between the ranks of purple and black, Firas made regular trips to Renzo’s blue basement in New York, training with Danaher and the squad.

The Guillotine is seen mostly as a choke in BJJ, and perhaps maybe as a position that can provide frot headlock-based takedowns. This Firas Zahabi BJJ DVD shows the full potential of the position and actually features very few chokes.

Firas goes through the mechanics of the guillotine and presents it in three different ways. He starts off exploring the ways in which ha guillotine can help you retain guard and counter plenty of dangerous passes. He then turns it into a powerful positional weapon, using it to sweep, pass, transition, and set up arm triangle chokes. Finally, he talks about using the guillotine from standing, using it to blend together wrestling and Judo attacks.

As per usual, Zahabi brings everything together in a way that only a few instructors out there can. He uses lots of training footage to demonstrate how everything works, basically by using the entire Guillotine Traps instructional the way most other BJJ DVDs include an analysis section at the very end. He doesn’t just narrate rolls and live examples, he also stops, analyzes video, and draws diagrams to make everything more than crystal clear.

The Gullotine Traps Firaz Zahabi BJJ DVD is not a simple one. Using the guillotine to maneuver yourself through different grappling control positions can be tricky. However, Zahabi’s style of teaching and the format he used for this instructional makes everything extremely simple.

In other words, the same moves and explanations Firas uses will be just as useful to white belts, as they will be to seasoned black belt competitors. Everybody will learn something from this instructional, whether you are a fan of guillotines or not. Furthermore, the entire instructional is No-Gi, which by default, means that you can use all of the moves with a Gi as well.

End verdict, is a highly complex concept simplified into a very easy-to-understand system. A perfect fit for anyone.

No surprises there, as this is a BJJ fanatics release. However, Firas did not shoot this one in their regular Boston studio we’ve grown so accustomed to. Apart from a different background, though, the quality of the video in terms of video and audio performances is immaculate. Everything is shot in Firas’ TriStar Gym, mostly featuring Zahabi executing the moves, and his analysis and voiceover breakdowns guiding you through. A very fresh breath of air if you ask me.

The first part of this Firas Zahabi BJJ DVD instructional has the least number of chapters. That just translates to more time per chapter, allowing Firas to really get into the flesh and bone of things.

The goal here is simple – prevent people from achieving anything against your guard via guillotine traps. ZZahabi demonstrates how to very intelligently and efficiently use guillotine groups to prevent even the scariest of passes, like the stack pass.

He also explores up and over scenarios, and also addresses Granby rolls in relation to guillotines, which, I have to admit, was first for me. The thing I found to be the most useful was the tug-of-war solution, in regard to grips and common guillotine counters you can expect.

Grip-wise, Zahabi shows both arm-in and direct guillotines, although he sticks to the arm-in variation which seems to offer a lot more.

The richest part of the Guillotine Traps DVD, in terms of chapters and variety of techniques. This is where Zahabi brings things together, building on the basis of having a strong (read: impassable) guard as explained in the first part of the DVD. What comes next is activating the guillotine traps system so that it becomes offensive.

Interesting finishing, sweeping (we’re still in guard) and transitional options arise from a simple guillotine grip. You can pull of a switcheroo, you can use see-saw motions to make everything ultra-tight, you can sweep, or even get to a nasty crucifix position. Hook sweeps make up a good third of this instructional, meaning you just got an upgrade to your butterfly guard game.

Finally, there is a chapter on dealing with those heavy-based grapplers that dig in from the top. Oh, and there’s a Darce choke in there also, just for good measure and variability.

DVD number 3 takes care of the standing applications of the Guillotine Traps system by Firas Zahabi. Just to make things clear, while a guillotine is set up from the front headlock position, it is not the same as front headlock control. Quite the contrary, the guillotine offers avenues of movement that are not there with every front headlock configuration.

in this portion of the instructional, Zahabi covers takedowns from the standing guillotine position. He blends together wrestling and Jud attacks, covering scenarios in which the opponent moves both towards and away from you.

Techniques included in this final part of the guillotines Firas Zahabi BJJ DVD are Sumi Gaeshi variations, crotch lifts, and even a very creative suplex that is easy and fun to do. There is also a highly entertaining and innovative section on carb walks, as well as a few drills to help you drill guillotine takedowns.

Considering this Guillotine Traps Firas Zahabi BJJ DVD instructional’s technical aspects and quality of content, we come to an overall score for this instructional that I’ll deliberate in short below.

An absolute ten, I’d even give it a higher score if I could. Talk about backing myself in a corner with the grading scale thing. Jokes aside, and looking past the usual culprits in terms of camera work, audio, and video quality, this, instructional really does offer something special.

The way in which Zahabi delivers the content, blending together technique demonstrations as we know them, and his trademark analysis of rolls and drills I will go out on a limb and claim that he has stumbled upon the best possible format for BJJ instructional.

I dock a point here off the scale mainly because of the short length of the instructional. I am fully aware that this Firaz Zahabi BJJ DVD takes a very specific subject, and an hour and a half worth of material is already more than enough. However,r I feel he could’ve elaborated on a few things further, if not enough to at least include a fourth part to this instructional.

Everything he does cover in this DVD is gold. The entire concept of Guillotin Traps is very enticing and promising in itself. The fact that Firas connects it to so many different options means everyone can use bits and pieces of it (if not the whole thing0to easily and quickly diversify their game.

Yup, this one is a ten. Anyway, I see it, technically, content-wise, methodically, or by the sheer value for potential, the Guillotine Traps DVD wins. Whoever gets it, Gi or No-Gi, recreational or professional, white or black belt, will benefit from this. I’ll go even as far as naming it the perfect gift for a grappler if you’ve got one coming your way soon.

Firas Zahabi is one of that Ryan-Hall-type of genius grapplers that don’t really try to overpromote themselves. All who know their value will seek them out. The best part about this the Guillotine Traps DVD is that it is just one of a rapidly increasing Firas Zahabi BJJ DVD collection tI feel will have as much impact on the BJJ world as Dnahaer’s collections did. maybe even more.