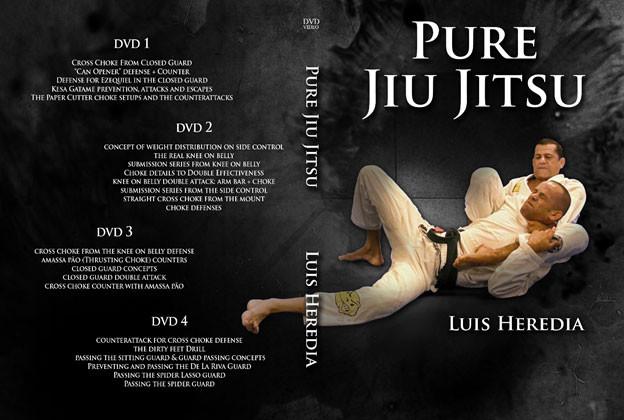 If you know what an Amassa Pao is than this article might not be for you. What is definitely for you though is the Luis Heredia DVD that explains this old-school move. Not only does it explain the Amassa Pao, but it also contains a host of other techniques that are Pure Jiu-Jitsu. Perhaps it is time to give the worm guard a rest and focus on some forgotten fundamentals. These techniques work and they’re going to fit your BJJ game to a whole new level, Who knows, you might even get a belt if you really absorb the knowledge in this Luis Heredia DVD.

Perhaps most of you are unaware who Luis Heredia is and this is keeping you from purchasing his amazing product. Well, you’re not going to find a BJJ coach that is more knowledgeable in the basics of the Gente Art than Limao. Well, perhaps maybe Rickson Gracie, who, by the way, is Heredia’s coach. So what you get in a Luis Heredia DVD is all the knowledge of the great Rickson, digested and purified in a way anyone can understand. Still not sure?  Heredia is a multiple-time world champion and a 6th-degree black belt under Rickson. You don’t get a better pedigree than that.

Born in Rio De Janeiro, Brazil, Heredia got into martial arts as a teenager, much like many of his contemporaries. His art of choice was Taekwondo, but he soon came across Jiu-Jitsu and found his true passion. Seeing as how Gracie Jiu-Jitsu kids always came up as winners in street fights that were really common for Brazil, Heredia decided to give it a try. He began training at a local academy before ending up in Gracie Humaita, thanks to his surfing friend Royler Gracie. Once he moved to the USA, Heredia ended up training with Rickson at the newly formed Gracie academy around 1987.

After the turn of the century, Heredia moved to Hawaii, where he established his own academy in 2002. Hawaii is the perfect destination for a dedicated surfer like Heredia who also is a master of Jiu-Jitsu. Suffice to say, his academy Maui JIu-JItsu is still at large as one of the top academies on the island. Now, anyone in the world can benefit from the decades of knowledge and experience of a true legend of BJJ, thanks to the Luis Heredia DVD “Pure Jiu-JItsu”

As far as Jiu-Jits style goes, Heredia as a proponent of the Gracie way. He likes to keep things simple and as close to the root style of BJJ as possible. Furthermore, he’s also a 145 lbs grappler, meaning he relies way more on techniques than athleticism. His Jiu-Jitsu is really as pure as it gets, revolving around effective techniques that require no strength.

The “Pure Jiu-Jitsu” Luis Heredia DVD set is a four-volume release that focuses on a different subject in every disc. Luis goes deep into detail on every position and submission and has sequences structured around one basic move. All in all, every chapter works like a mini system of its own, often not relating much to the other systems presented in the same chapter. This allows you to build a complex BJJ game in which you can go back and forth among a bunch of systems to reach your final goal.

From the bottom, Heredia first dissects the first submission new students learn – the cross collar choke. From the closed guard, he explains how the Gracies did the choke and why these mechanics are superior to any other. Hidden details about the choke are revealed that once you see, you’re going to want to test immediately. A really useful concept is the one on defending the can opener. The can opener is a really brutal neck-cranking way to open the closed guard. While illegal under IBJJF rules,s it is legal in other competition formats, meaning you need to know how to defend it.

Kesa Gatame defense, Ezekiel while in closed guard defense as well as dealing with the Paper cutter hoke are also covered. it is truly Pure Jiu-Jitsu.

One of the most dreaded positions in all fo JIu-Jitsu is the knee on belly positions. Hereda explains how to position yourself in order to maximize your pressure on the opponent’s chest. His weight distribution tips really do make a difference. Going ahead, Luis spends a lot of time demonstrating a series of submissions from the knee on belly. From chokes to armbars he covers everything before moving on to side control attacks. Ultimately Hereda circles back to the cross collar choke, this time from the mount position.

Counterattacking From The Guard

In the third volume, it is back to the guard with counterattacking concepts. First and foremost, it’s the Amassa Pao. This is a really old school way of guard passing with a Gi choke that is very difficult to deal with. Until now. Heredia offers variations on defending this choking pass while opening up counters to submit your opponent. Once again the knee on belly position is featured, although this time in a defensive manner.

In this volume, Luis spends a lot of time on closed guard concepts and attacks. He offers principles on how to retain the closed guard and attack with multiple threats at once.

Finally, it is time to deal with the guard, as Heredia moves on to passing. He shows a very interesting drill sequence dubbed “dirty feet” that everyone should spend time on. Furthermore, he dissects how some of the most common guards work and conversely, how to pass them without getting caught. His focus is on preventing the structure of guards in the first place, and only then on passing them. The De La Riva, Spider and lasso guard are covered in great detail.