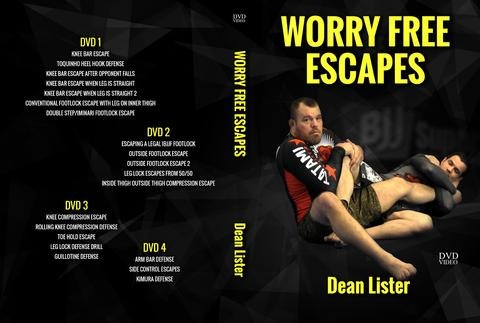 A couple of days ago John Danaher came out with he announced that he is finally releasing a DVD series. Every self-proclaimed leg locker in the world had as close to a holiday as possible when the news came out. For all the people that are still not knee-deep in leg locks, this came as a piece of horrible news. People are now going to have access to a highly structured and effective system of leg lock submissions, primarily heel hooks. This raises the need for a defensive concept to battle these brutal submissions in a safe and effective way.

Luckily, there’s no need to wait as there’s a digital resource out there that is as good as they come. And it is hosted by the one man Danaher himself recognizes as the “original leg locker” Yup, you guessed it, it is a Dean Lister DVD that is all about escaping leg locks.

In the flurry of leg lockin instructionals coming out every day, only a few have found it important to include defensive aspects of the game. This latest Dean Lister DVD is all about deconstructing the most dangerous leg locking positions and escaping submissions that were thought to be inescapable. Only a few people have managed to get out of bouts with the Danaher death quad without tapping to a heel hook so far, and now, you can learn the secrets to becoming one of them. Not that you’re going to face the squad anytime soon, but you’ll probably come up against a fan of theirs. this is even more dangerous, as people experimenting might do way more damage than those experienced in leg locks. So, grab your Worry-Free Escapes Dean Lister DVD and be afraid of leg locks no more!

The Threats Of The Modern Leg Locking Game

What Danaher brought to the world of Jiu-Jitsu, in terms of leg locks was nothing new. Actually, he applied the most basic BJJ principle of them all – positional control. Inspired by Dean Lister, Danaher decided to explore the forbidden territory of leg locks. However, he did not settle only for studying the different locks but instead developed a complete system. He decided to emphasize control over finishing, which interestingly enough, only improved the finishing.

Danaher’s leg locking system is based on what he calls Ashi Garami or leg entanglement. The Ashi Garami system focuses on controlling every joint of a leg with your whole body, before eventually finishing with a heel hook. its effectiveness is beyond doubt, as proven on every major competitive stage in the world. The riddle so far has been how to deal with the heel hook finishes that the system favors. The real problem, however, is dealing with the control that enables a grappler to finish with a submission.

Dean Lister, who is one of the most successful leg locker s in the world, is no stranger to the Danaher system. In fact, he is the reason Danaher developed it. Dean is also the first to recognize the need to deal with the positional dominance of this leg locking system, instead of submissions themselves. Now, with the Worry-Free Escapes Dean Lister DVD you can learn all the nuances of a successful defensive game too!

This Dean Lister DVD is a real masterpiece. Dean is extremely good at focusing on what is truly important and leaving all the mumbo-jumbo aside. he is a terrific teacher that is very easy to listen to. Do not expect to be confused by the complexity of his explanations. Quite the opposite, he keeps things simple and crystal clear.

The focus of this Dean Lister DVD set is on all leg locks that you might come up against. Whether legal or illegal, Dean offers ways to deal with every lock and position opponents might attempt against you. Three of the four volumes in the set are aimed at deconstructio\ng positions that lead to kneebars, heel hooks, toe holds, foot locks, and knee compressions. The final volume is a bonus one, offering defenses to the most common upper body submissions and escaping dominant positions.

No introduction needed, Dean jumps straight into the deep end. Volume number one starts off with a basic knee bar escape before tuning to the dreaded heel hooks. If you ever wondered how someone could escape Rousimar Palhares’ heel hooks, you’ll get the answer here. Dean deconstructs every little mechanical point of control so that you’ll not only defend but escape the positions as well.

Kneebars are the central piece of this DVD, which is great news for all IBJJF competitors out there. Dean starts off easy, covering the basics of the kneebar, and offers defensive variations as the attack progresses. In that sense, you’ll learn how to defend the kneebar at multiple levels, from entry all the way to full leg extension. Lister covers everything there is about kneebar and heelhook defense, all the way to deal with an Imanari roll.

If there’s one volume of this Dean Lister DVD set that every grappler needs to see it is this one. Straight footlocks are legal at every belt level in every competition in the world. A such, they are a big threat when done from a position of dominant control. Actually, it is this IBJJF legal footlock that Dean focuses on at first. Expect to learn a lot of details on the leg lock itself, before discovering how to get out.

Furthermore, the volume goes over every footlock position imaginable, Inside footlocks, outside footlock, attacks from the 50/50 guard area all covered in impressive depth. IN summary, this is the hail Mary of leg lock defense DVDs and is a must for anyone training BJJ.

WHile toe holds are quite common in BJJ circuits, knee compressions are, for some reason, a very underused submission. Despite their huge effectiveness, people seem to shy away from them, even though they’re legal in IBJJF tournaments. There are a few instances when people have pulled off brutal compression locks in the UFC. Lately, Geo Martinez got one at the highest level of No-Gi BJJ – The Eddie Bravo Invitational. NOw Lister offers ways in which to deal with these brutal submissions. The lock itself is not very difficult to defend, but the position is. Lister covers both prevention and escape. He also covers rolling attacks that are notoriously hard to defend against.

Rounding off this amazing Dean Lister DVD are a few escapes and counters to upper body attacks. After going over every leg lock position available, Lister focuses on armbar escapes, guillotine defenses, and Kimura counters that are as easy as they are effective. You’ll also learn how to stay calm and collected when on the bottom of side control. This is essential in successfully getting out of one of the most dynamic positions in BJJ. All in all, you’re become unsubmittable to even the most experienced grapplers.