A submission DVD instructional is nothing new in today’s grappling world. They are everywhere, featuring everything, from crazy stuff that’ll never work to new takes on old classics. However, there are only a few true, proven submission artists among those demonstrating the moves. It really does take a submission hunter to truly explain how a certain submission hold works. One of the very best out there regardless of opinion is definitely Edwin Najmi. He is a real submission machine, capable of everything, from D’arces to wicked back chokes. However, he is also a real wizard when it comes to triangle chokes as well. His “Triangles And More triangles” DVD instructional is the best guide to the triangle choke you’ll ever find. At least if you really want to get good at them.

Edwin Njami is a grappler who is fun to watch. Granted, he might not win all his matches, but he can guarantee one thing – he’s always on the hunt for a submission. Gi or No-Gi, Najmi’s matches are high paced and highly entertaining to watch. This is not something many grapplers, particularly modern ones, can freely claim. As such, Najmi is also the perfect teacher to teach submissions to competitors. Actually, he is a great teacher to teach them to anyone. However, what you’ll get in the “Triangles And More Triangels” DVD is a short and sweet blueprint to turning the triangle choke into your highest percentage attack. How could you not take it

Najmi is a high-level black belt under the illustrious Romulo Barral. As such, the 28-year-old is one fo the most attractive competitors of today. He is never shy of going for the flying and attractive. What is most impressive about it is that his moves work against the best black belts of today! An aggressive grappler by trait, Najmi is not only a threat to his fellow lightweights, but also to anyone and everyone in the open class too. Moreover, he is extremely well versed in both Gin ad no-Gi JIu-Jitsu. 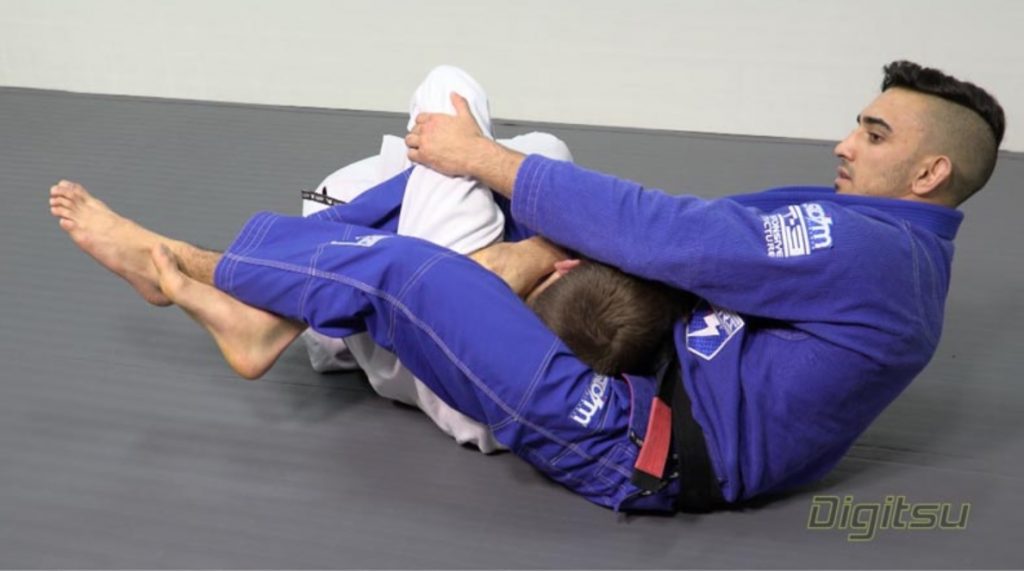 Some of Najmi’s most distinct titles so far include a Gold medal at the ACBJJ Lightweight Grand Prix, A Pans Championship title as well as a FIVE super league world title. NO to mention all the other medals in the Worlds, Europeans, Abu Dhabi Pro, and others. And that’s before we even touch on his success at sub-only professional tournaments. IN fact, just recently he was part of the dominant BJJ Fanatics Team at the brand new Kintektic Submission Grappling tournament. The Gracie Barra representative is not just a real submission artist but also has a favorite move – the triangle choke. A real spider guard aficionado, thanks to Romulo Barral’s teachings, Najmi is able to slap on a triangle on just about anyone.

If we take a look at Najmi’s record, we can see that more than half of his wins are by submission. Out of those, chokes seem to be the preferred method, ranging between RNC, triangles and D’arce chokes. In fact, Najmi has instructionals out on all of them. However, his “Triangles And More Triangles” DVD instructional is actually one that stands out even amongst his own work.

The “Triangles And More triangles” Edwin Najmi DVD is one of those instructionals that you sit down and watch in one breath. Actually, it is not even that long. This is not a multi-part instructional lasting for tens of hours and talking about anything and everything. This is a highly specialized instructional that focuses on just one aspect of only one Brazilian Jiu-Jitsu move. As such it is the perfect tool for competitors looking to really hone in on their triangle game.

IN terms of organization, the DVD has three distinct sections, each containing around 7 chapters. The total running length of the DVD is just under an hour. During the time, Edwin Najmi shares his knowledge on the triangle as a submission, as well as all the major concepts associated with it. To that extent, he also shares a whole host of entries, mainly from his go-to spider guard. Thre’s also the closed guard triangle, as well as crucial troubleshooting information. And, of course, it wouldn’t be an Edwin Najmi DVD if it didn’t contain his infamous flying triangle with al the juicy details!

As the DVD begins you immediately understand this is a different class of an instructional. Najmi wastes no time and there are triangles even in the short introduction to the DVD. OF course, as any high-level black belt, Najmi bases his triangle game off of concepts. Thos mainly pertain to grips and distance management, something he covers in detail ion the first few chapters.

Moving extremely fast, right after some closed guard basic is the flying triangle. Since Najmi considers it to be a basic setup, you get to learn it early. After you see how Edwin likes to do it, you’ll understand why it works even against black belts. Ther are lots of takedown faints and combos that actually make the flying triangle possible to execute. Also in this portion are chapters covering the sitting guard triangle and some details on posture.

The spider guard is notorious for opening up submissions as opponents struggle to deal with it. It is one of the best Gi guards you can play and certainly a great tool for competitors. Romulo Barral, a seasoned competitor himself knows this very well. That is exactly why he had Najmi work on his spider guard game from very early on. Throw in the fact that Najmi is a lanky guy with long limbs, and you have the perfect storm for a triangle master.

As you’ll see in this middle portion of the Triangles And More triangles DVD, the spide guard is perfect for this submission. Najmi shares his entire game, from the basics of the guard, to sweep and submission combos. Moreover, everything works and is dialed in so that even white belts can understand int. For all you spider guard experts out there, the details on triangle hunting are astonishing.

Before he wraps this DVD up, Edwin Najmi also covers the closed guard triangle in extreme detail. After all, this is a basic setup that works perfectly to this day. As such, Najmi rally has lots of insight to offer, mostly in th form of crucial tips and tricks and small adjustments that make all the difference. In a real high-level manner, he ties in stuff like the flower sweep and lapel guard combination with the triangle from the bottom. That way, he offers a system that’s extremely attack-minded. More importantly, it stays based on fundamental moves like triangles and flower sweeps, guaranteeing it’s efficiency.

The final few chapters cover troubleshooting, where Njami answers just about every unanswered triangle question out there. In fact, this might just be the most informative part of this instructional all together!

Edwin Najmi is definitely ana aggressive and entertaining competitor. Learning from him is a bonus, particularly when it comes to his best moves. And there’s nothing he does better than a triangle. The “Triangles And More Triangles” DVD really contains everything you’ll ever need to know about this submission. All ti takes is going through it carefully a couple of times.