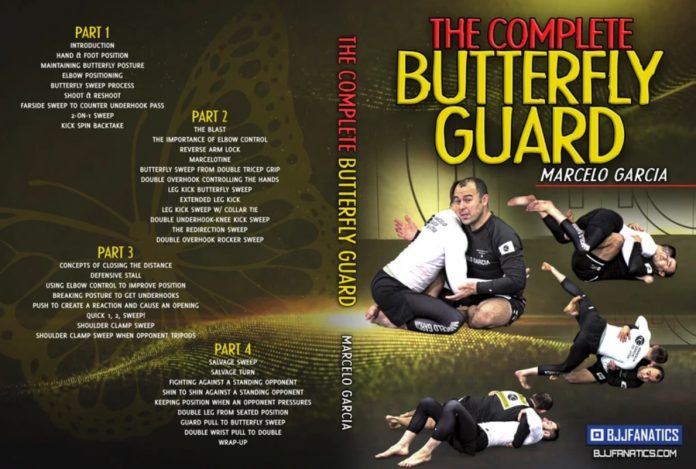 Marcelo Garcia’s new DVD is out! In a previous article, we discussed what we should expect from it. Now, it time for a full Marcelo Garcia DVD review to see if all our expectations were met. From the first few minutes of watching this instructional, it was clear that it is going to be one of the best I’ve ever seen. And that’s not just down to the fact that it is Marcelo Garcia teaching. The Complete Butterfly Guard is organized in a very specific manner. Given that Marcelo is everything but a conventional grappler, his take on the butterfly guard is different as well. I’ve been waiting for years for a full instructional on Marcelo’s butterfly guard. Finally, the wait is over.

In those early (read really old) Marcelo Garcia DVDs, which I strongly suspect were VHS tapes originally, there’s a wealth of information that’s still more than applicable today. The thing is, the production is low quality at best. Plus, we all know Marcelois tireless in constantly evolving his game, so I’d say the Complete Butterfly Guard DVD is long, long overdue. Marcelo is one of the most sought-after coaches out there, and getting to train with him is never easy. Privates are almost impossible to get, due to popular demand. Since he is not doing lots of seminars, all that’s left is going to his NYC gym. Or picking up his Complete Butterfly Guard instructional after reading this Marcelo Garcia DVD review.

The Legacy Of Marcelo Garcia 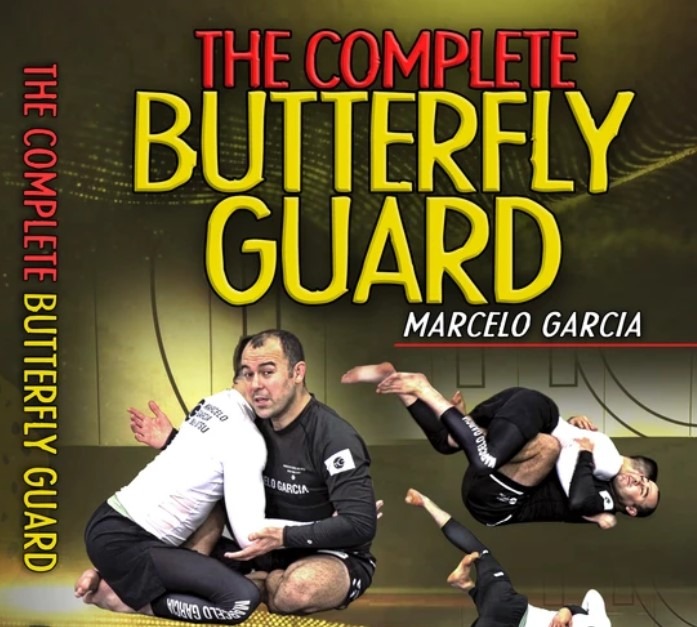 There’s really nothing much to say about Marcelo that people do not know. He is one of those grapplers whose name is recognized across generations. There are not many people that can claim the same, particularly as Marcelo hasn’t competed since 2011. There are murmurs of him coming back to competitors though. That would certainly be a treat, as Garcia has one of the most exciting No-Gi styles out there. Seeing him in a submission-only format for the first time would certainly be a treat!

Speaking of Marcelo’s accomplishments, the 37-year-old is often taunted as being the GOAT in BJJ. Of course, people often argue the fact that pitting modern-day champions with those of a decade ago is not really realistic. It may be true for other sports, but in BJJ, there are so many ways to measure accomplishments. Speaking of which, Marcelo has a record of 86 wins and 17 losses, with a 65% submission rate. That is as impressive as a record can get. Moreover, his titles include 4 ADCC championships in (2003. 2005, 2007 and 2011). That’s eight years of dominating the toughest grappling competition out there, with the exception of 2009.

In the same period, Marcelo has 5 World Titles to his name, as well as a Pan Am Championship and 3 Brazillian Nationals titles. That’s before even mentioning some of the opponents he has faced and beat in all those matches. Examples include Kron Gracie, Renzo Gracie, Vitor Shaolin, Bruno basts and many others.

During all his grappling performances, Marcelo relied heavily on the butterfly guard, rear-naked choke and guillotine choke. It makes sense that his first modern instructional is named The Complete Butterfly Guard and we have the first detailed Marcelo Garcia DVD review of it.

The Best Butterfly Guard Player Ever?

Let’s take a break from the “who is the GOAT” debate, and focus on who is the best butterfly guard ever instead. After all, The Complete Butterfly Guard instructional addresses a very specific subject. FI we take a look at the roster of the best modern guard players, both Gi and No-Gi, not many use the butterfly guard too often. Danaher’s guys, with Eddie Cummings, in particular, were probably the best at it in recent times. However, their game was all about getting to leg locking positions, rather than sweeping or looking for other submissions. Now, Marcelo is not a fan of leg locks, but he does like guillotines. that means this DVD offers a different direction to what other modern butterfly guard systems have to offer.

Moreover, Marcelo’s sweeping game from the butterfly guard, particularly in No-GI, is second to none. He has a very unique approach to the butterfly guard, and it is impossible to figure it out just from watching him compete or roll. That’s where the Complete Butterfly Guard comes in. I have to admit, I expected lots of sweeps in the instructional, but Marcelo still managed to surprise me. His sweeping patterns are incredible, and will definitely bring a new dimension to everyone’s butterfly guard. Check out the full Marcelo Garcia DVD review below!

First up, production-wise this DVD is flawless. Sound, camera work, angles, details, background, anything you can think of is just about perfect.  It is the organization of the material that I was wondering about before doing this Marcelo Garcia DVD review. In Marcelo’s online video library, he hares a lot of stuff, but never really shares the entire concepts/systems. That can be pretty annoying if you’re trying to really figure something out. I was reserved a bit about this DVD just because of Marcelo’s online video instructionals approach. Let me ease your fears right away, I shouldn’t have been.

In The Complete Butterfly Guard DVD, Marcelo Garcia shares his butterfly guard system in its entirety. The first volume goes over key fundamentals like the positioning of the arms and legs, and all the adjustments that come with it. The second part covers Marcelo’s favorite butterfly guard attacks, including both submissions and sweeps. past halfway, he covers concepts on closing the distance and more advanced details to break the opponent’s attempts at countering your butterfly guard. IN the final volume, Garcia covers how to fight a standing opponent and transition into some crazy stuff that no one has thought of before.

A short introduction by Marcelo is the first chapter of the Complete Butterfly Guard instructional. Right after, Marcelo gets straight down to business. His first technical details involve the correct hand and foot position. I can’t stress it enough how much these simple details in the second chapter of this DVD made things clearer for me. The next chapter, on the butterfly guard posture, is just as important and contains some information that might go against popular beliefs. They seem logical, though, and I can’t wait to test them out on the mats tonight.

Before moving off to the basic sweep, Marcelo also covers elbow positioning. That is one aspect of the butterfly guard that nobody pays much attention to. I can be a game-changer, as you’ll discover in this DVD. As far as the sweep goes, Marcelo demonstrates the entire process of sweeping someone from the butterfly guard. In other words, it is not just about technical details, but entire steps and how to execute and connect them all. Re-shooting and switching sweeping sides are some of the basic direction in which the process can go when the opponent counters.

Ther’s also a kick spin back take that completes the instructional. As you’ll see further in this Marcelo Garcia DVD review, quite surprisingly, this is the only back take off the butterfly guard Marcel demonstrates. I guess it is all we need

This second part of the Complete Butterfly Guard DVD is the real goldmine. I couldn’t wait to get to it, and I almost cut the Marcelo Garcia DVD review short to run off to the gym and give things a try. I just couldn’t find anyone to join me on the mats at the time. Once again talking about how important elbow control is, Marcelo, opens up with the blast, or how to get underneath someone in the butterfly guard. 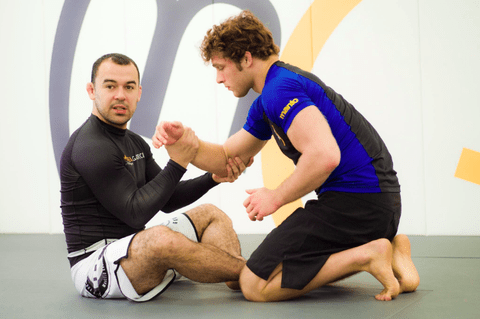 Following suit are the first submissions in this instructional. the hugely popular reverse armlock, which can double as a sweep is the first one. there are details in there that are just insane. Also making an appearance is the infamous Marcelotine, the undefendable guillotine choke variation bearing Marcelo’s name.

After the submissions, it is time for more sweeps, this time from an overhook position. here, Marcelo goes over several options, really paying attention to how you kick with the legs in different circumstances. Just for good measure and balance, the DVD ends with a few underhook sweeps. Suffice to say, Marcelo’s undertook positioning block every D’arce, Anaconda or front headlock choking opportunity for your opponent. Ultra-high level.

For those that really enjoy playing the butterfly guar,d and have run into certain obstacles. this is the DVD to explain everything. This part might not make sense too much to someone who is new to the butterfly guard, but it is essential to learning Marcelo’s system in its entirety.

The concept of controlling and closing the distance is key for the butterfly guard, as it only works when you’re very near your opponent. Combined with the information on grips that Marcelo shares earlier, this pretty much offers a foolproof way of working from the butterfly guard. Marcelo covers different ways to stay safe in the butterfly guard, improve your position by using grips as, well as braking posture. There’s also a great segment on working the push-pull dynamics to creating openings for your attacks.

This volume wraps up with the shoulder clamp sweep that Marcelo famously used in the ADCC. IT is the same sweep that the world went crazy for when Gordon Ryan used it at the latest edition of the ADCC.

Finally, it is time to tackle one of the biggest questions of the butterfly guard – can you play it effectively against standing opponents? Marcelo certainly can, and he shares his simple yet very powerful system in the Complete Butterfly Guard DVD. Ther are a couple of “salvage sweeps that you can do when your initial attempts go wrong.

The real gem in the final volume though is the portion on dealing with people that stand up. OF course, Another one of Marcelo’s favorite guards, the shin-on-shin si the first potion he presents. However, he then extends his option on to double leg takedowns off of the butterfly guard, as well as dealing with opponents who like to use pressure from the top. A couple of ways to pull butterfly guard wrap this instructional, and out Marcelo Garcia DVD review up.

My personal opinion is that nobody, even Marcelo himself, ahs ever issued a better instructional on the butterfly guard. This one has it all – concepts, techniques, follow-ups, attacks and defenses. In four volumes, Marcelo managed to pack a lifetime’s worth of knowledge on the subject of the butterfly guard. This certainly is the most Complete Butterfly Guard formula ever, and  I can’t wait to put what I’ve learned during this Marcelo Garcia DVD review to use in training and competition.