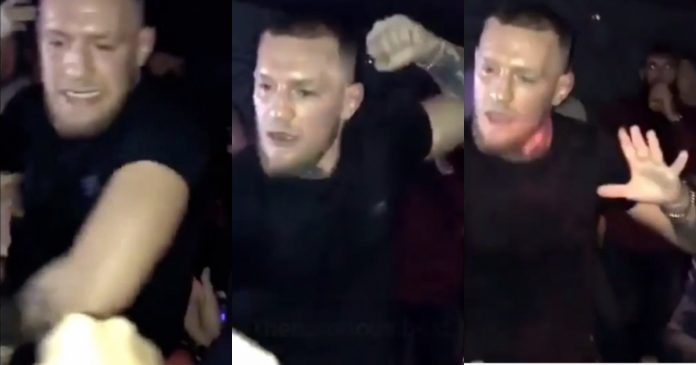 Looks like Conor McGregor is spending money from his fight with Floyd Mayweather on a wrong stuff.

Or maybe he’s angry because He’s not holding a PPV record. Conor and Floyd sold 4.4 M pay-per-view’s and that’s 200k less then Manny Pacquiao and Floyd Mayweather managed to sell.

This weekend he was filmed in some night club completely wasted and very close to hitting some random fan. It didn’t go too far this time and we can’t say what happened after because video stopped after Conor went crazy.

Conor got so angry last night ?

Anyway let’s get back to sport. Conor McGregor reveals he have many plans for the future and his MMA career now when Tony Ferguson and Kevin Lee are fighting.

“Look, I’ve got the UFC title to defend and that means something to me. I will defend that world title. Nathan is there. He’s trying to come in here and make all of these demands. If he starts pricing himself out of an event, I probably will defend against the person who wins this interim belt…or someone along that line to legitimize it again.”

“I’ve already gone from the highest of the high in terms of a money fight. Now the question I always get is about defending the belt and legitimizing the sport and the rankings. Maybe now it would be a good time for me to go and do that and shut that side up.” said Conor McGregor to the media.”

And we really hope to see him in an octagon again as soon as possible.