Brazilian Jiu-Jitsu as one of the fastest-growing sports has its own recognizable symbols. You have certainly seen most of them so far, but you may not have known their true meaning or their origin. Now, we will talk about the famous symbols of Brazilian Jiu-Jitsu. About their origins and how they find their way into the sport.

The main representing Jiu-Jitsu symbol, and the symbol found on the logos of most academies is the triangle. In addition to the triangle, we have other Jiu-Jitsu symbols that are popular today. One of these symbols is the BJJ Shaka which is very widespread and popular among BJJ practitioners today. And of course, there is another recognizable symbol, and that is the cauliflower ear.

Once you dive into the world of BJJ you will notice triangles literally everywhere, and mostly on the logos of clubs and academies and this is no coincidence. The history of the triangle in Brazilian Jiu-Jitsu dates back to the very beginnings of this sport and is an indispensable part of BJJ culture.

What does the triangle mean in Jiu-Jitsu?

The origin of the Triangle, as the most famous symbol of Jiu-Jitsu. The triangle represents the solid and stable base that a Jiu-Jitsu practitioner should have, the three sides represent the mind, body, and spirit, and these are the components of Gracie Jiu-Jitsu.

When you take a closer look at the logos of all the academies, you will notice that almost every one of them uses a triangle. So the triangle is certainly one of the most famous Jiu-Jitsu symbols. Of course, this Jiu-Jitsu symbol was not chosen by chance. It is a very powerful form with some principles that you can transfer to BJJ. These principles will help you in your BJJ journey, but also in life itself. 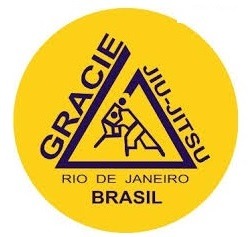 The origins of the Triangle symbol

The Triangle form was chosen and popularized by the Gracie family, hence the name Gracie Triangle. Brothers Helio and Carlos Gracie chose the triangle as a symbol of Jiu-Jitsu because it represented a solid and stable base that all BJJ practitioners should have.

As we know, a triangle has three vertices. Regardless of which side it rests on, the Gracie Triangle will always have a strong base. Three vertices represent the three components of what is known as Gracie Jiu-Jitsu. These are mind, body, and spirit. All of them together define a Brazilian Jiu-Jitsu practitioner.

A slight slope at the top of the triangle forms the letter G, which stands for Gracie.
Inside the logo, there are two Gracie Jiu-Jitsu practitioners who strive to master the mind, body, and spirit. 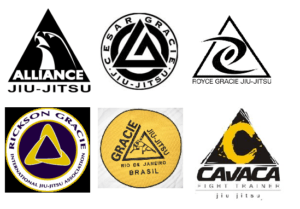 Rickson Gracie about the triangle symbol

Rickson Gracie also explained this symbolism of the triangle as one of the most important Jiu-Jitsu symbols:

“In Jiu-jitsu, the triangle has a deep meaning. It comes from my father, Helio Gracie, and my uncles, and from my own efforts to develop the art.
We have realized that there is a kind of three-point base in every aspect of Jiu-Jitsu. The triangle reflects this meaning of a perfect base.
For example, if you mount your opponent, his body will be one point and your knees will the other points. There are always three points of contact.
This doesn’t mean you cannot be moved, rather it means that the ways you can move are predictable. The fact that they are predictable means you can find an extra element to create a new third point whenever you need to.
If you imagine a perfect triangle in three dimensions, in pyramid form you can see how you can push it to either side, and it will always be stable. Regaining its solid position every time. The application of this concept works that way.
When you mounted on your opponent and have three points of contact, he can move you around and you will easily find your third point again.
No matter how or where he moves you, you will be able to find his third point of support.”

If you are familiar with the Brazilian Jiu-Jitsu world, you have probably seen this symbol by now. Most of us took pictures at least once in training with the Shaka symbol, right? For sure, we can say that Shaka, after the triangle, is one of the most represented Jiu-Jitsu symbols. However, most people do not know its true meaning, they have mostly seen it from other BJJ practitioners or professors. Actually, this symbol did not originate from BJJ, but there are stories of how the shaka came to BJJ. 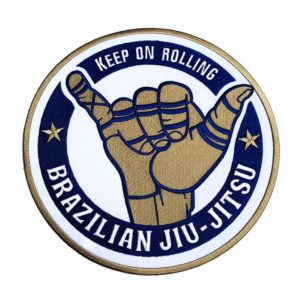 The origin of the Shaka symbol

As we have already said the symbol Shaka is old, it is a hand gesture native to Hawaii.
This symbol actually represents a state of relaxation. One of the common translations for this gesture is “hanging”. There is no literal translation for “Shaka”. We can understand that it is a way of conveying the spirit of “aloha” and is often used as a greeting in Hawaii.
Also, this symbol is popular in Hawaii with surfers and divers. Whenever they pass each other or in the water, they make a Shaka gesture to say hello to each other.

A lot of legends and myths are associated with the origins of this symbol.
One Hawaiian legend says that Shaka’s origins tied to just one man, mythical resident of Laie reportedly lost three fingers while working in a sugar factory. After the accident, he went to guard the train with sugar, often waving with his mutilated hand. Children along the island often saw him doing so and adopted the sign.
Another myth is similar, it tells of a surfer who lost three middle fingers after encountering a shark.

How did the Shaka symbol come in BJJ?

Shaka symbol in Brazil is, as we know, closely related to Jiu-Jitsu. Brazilians, along with Hawaii, are among those who use the sign often.
How BJJ Shaka came into being is also not entirely clear. Similar to the stories that revolve around the origins of the Hawaiian Shaka, there are also several different stories about it. 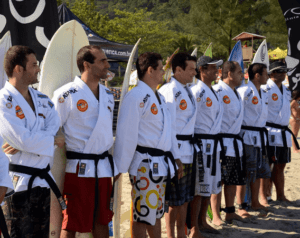 When Jiu-Jitsu appeared in Brazil the sign was already a big part of surfing culture. Back then, many surfers were training BJJ, and that they transferred this symbol to the sport. Rolls Gracie is the main connection because he was a surfer and grappler. 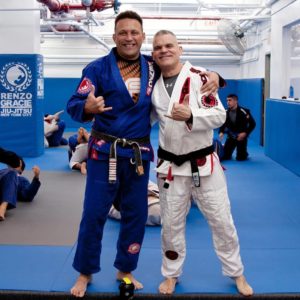 Another version considers that Renzo Gracie has popularized BJJ Shake. Renzo fought Oleg Taktarov in a bare-knuckle fight and he has broken his arm. Legend says, that at the time, the guys from BJJ always used the “thumbs up” gesture. Posing for photos after the fight Renzo tried with a thumb that ended up like Shaka. According to Renzo, the community then accepted the gesture, and so this became one of the most popular  Jiu-Jitsu symbols to this day.

Cauliflower ear is an ear trauma that causes a buildup of fluid that eventually hardens if left untreated. Over time, the ears take on the appearance of cauliflower, hence the name.
To prevent trauma to the ears, students can often wear different headgear to protect them from the trauma.

Cauliflowers may or may not be a symbol of BJJ as the condition is mostly related to wrestling but with the increase in the number of people practicing BJJ, there is a high probability that when you see someone with cauliflower ears that he’s training or has trained BJJ.

Some consider this condition repulsive and disgusting. But there are people who accept it as the harsh reality of the sport and consider it as a badge of honor. And then again we have people stuffing themselves with cauliflower ears, so today it’s pretty safe to say that Cauliflowers really are a symbol of Jiu-Jitsu. 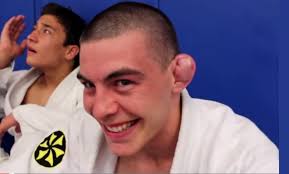 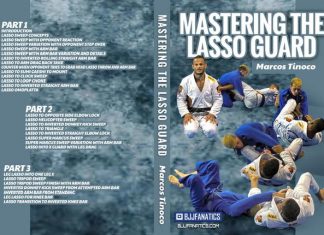 0
Mastering The Lasso Guard is a Marcos Tinoco DVD set that is going to make you one of the best guard players in your...